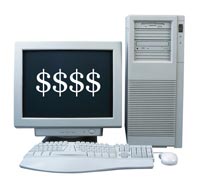 The Administrative Office of the Court’s statewide computer system will cost $1.75 billion, 35 percent more than the agency said it would cost in a recent memorandum, theDaily Journal newspaper has found.

SEIU 721 members have repeatedly asked the AOC to open its books and reveal the true cost of the computer system. Court reporter Arnella Sims, a member of the SEIU 721 executive board, compared the $1.75 billion program to “recreating Microsoft.”

“It’s beyond my comprehension how we can have such a costly software system with what appear to be runaway costs that no one is scrutinizing,” she told the Daily Journal.

Cost overruns, missed deadlines and runaway private contracts have plagued the system, which is expected to cost 5 times higher than 2006 projections, and be completed 3 years late.

The article shows that the AOC ignored earlier warnings about the cost and lack of oversight. A February 2004 report by the Legislative Analyst’s Office warned that “the state’s financial exposure is potentially significant.” The AOC did not provide legislators with

“How much the program will ultimately cost is still unclear,” the Daily Journal states.

Read the full article below:

SAN FRANCISCO – The Administrative Office of the Court’s statewide computer system is expected to cost $1.75 billion to develop and implement, 35 percent more than the agency said it would cost in a recent memorandum to state judges, the Daily Journal has found.

“Total investment… including development, licensing, data integration, and deployment for all case types through 58 courts, is estimated at $1.3 billion over the life of the project,” states a memo posted in August on an internal court Web site.

But according to an AOC report to state lawmakers, the agency spent $324.8 million on the California Case Management System from Fiscal 2002-03 to Fiscal 2007-08. A spreadsheet the agency provided to the state Department of Finance in January projected more than $1.4 billion in additional expenses for CCMS through completion, for a total of $1.75 billion.

The sum is nearly five times more than what the agency expected the project to cost in 2006, and the system will be completed no sooner than 2013, three years later than expected. Philip Carrizosa, an AOC spokesman, confirmed the $1.4 billion in projected expenses.

He took issue, though, with adding that figure to the sum already spent to come up with a total figure for the project, saying those earlier expenses were for “interim” products that are not part of the ultimate computer system.

“It would be misleading to call it all CCMS,” Carrizosa said.

The agency’s own documents dating back to 2006, however, address those products, called V2 and V3, as part of CCMS and imply they are key to the system.

Carrizosa also said the agency has recently found ways to save money on the project so it may come in at less than what was projected in January.

Arnella Sims, a court reporter and a member of SEIU Local 721 in Los Angeles, called the $1.75 billion estimate, “quite extraordinary,” and likened it to “recreating Microsoft.”

“It’s beyond my comprehension how we can have such a costly software system with what appear to be runaway costs that no one is scrutinizing,” Sims said.

Lt. Wayne Bilowit, a lobbyist for the Los Angeles County Sheriff’s Office who has voiced loud concerns about the AOC shutting down courts while continuing to spend on big projects, said he found the figure “shocking.”

He said his agency is overhauling its own computer system – which includes case information, statistics and warrants – for $37 million, about 2 percent of what the AOC is spending.

“I don’t have any idea what they are doing here,” Bilowit said.

CCMS is much larger in scope. It is intended to replace more than 70 different case management systems used in the state’s trial courts, many of which the agency says are outdated or failing.

Calling it “a computer system,” the memo states, “is like saying that the Internet is another way to send mail.”

The project was one of the first the AOC took on after the Trial Court Funding Act of 1997 removed management of the state’s former superior and municipal courts from counties and brought it under the AOC’s control.

By 1998, the agency had already awarded $671,000 to 10 counties “to begin defining system requirements or to procure a new [computer] system,” according to the Legislative Analyst’s Office.

The agency wanted the Legislature to approve an additional $305,000 that year to hire two staffers to begin initial development “of a state-sponsored automated trial court case management system” to be tried in 10 counties. Neither of those figures are included in later reports on the project’s costs.

In 2001, the project officially launched with $21 million in seed money approved by the Legislature from judicial branch special funds – the Trial Court Improvement Fund and the Modernization Fund.

The agency said it is unable to provide budgets or a timeline for the project from 2001.

It also said that, even if it had them, they would not be accurate because the project has evolved from those early stages to something much more ambitious.

When it’s completed, AOC officials said, the new case management system will allow courts all over the state to share cases and other information and allow law enforcement agencies to easily access court orders and connect with the Department of Justice’s domestic violence and protective order registry.

The new system will cover every kind of case – from traffic to probate and everything in-between.

Ron Overholt, chief deputy director of the AOC, said the agency did not envision such an all-encompassing project until relatively recently, despite the earlier discussions in state records.

He said that initially the project involved only four neighboring superior courts – in Ventura, Los Angeles, Orange and San Diego counties – that wanted to develop a common system.

Overholt said it wasn’t until 2002 that the Judicial Council asked the AOC to develop an infrastructure for all the courts in the state.

“That sort of began the evaluation of this,” he said. “I’m not sure any of us envisioned a statewide system for all case types and all courts.”

Indeed, there appear to have been changes to the project along the way.

Between 2007 and 2008, it appears the AOC decided to add court reporter and court interpreter scheduling to the system, as well as other functions that will allow CCMS to communicate with law enforcement systems, according to reports the agency provided to the Legislature.

But even very early on, some regarded CCMS as a maverick project with inadequate oversight.

In a February 2004 report, the Legislative Analyst’s Office warned there was too little scrutiny and controls on CCMS – and a companion project to create a statewide accounting system – and that “the state’s financial exposure is potentially significant.”

The executive branch is required to submit risk mitigations and oversight plans before undertaking technology projects, the LAO noted. But there is no such requirement on the courts.

Instead of being subject to legislative scrutiny, internally appointed steering committees that “do not have adequate information to do their job effectively” were overseeing the massive technology upgrades, the report said.

It notes the AOC had provided no information as to the projected cost at each major phase of the project.

“Without such information, we do not believe that AOC’s steering committees will be able to effectively monitor the projects. This places the courts at greater risk for cost overruns, and delays for lack of adequate funding to complete the projects,” the report read.

At the time, the AOC had spent $32.4 million on CCMS and the LAO said it “could cost up to several tens of millions more” before its then-expected completion in 2009.

The increases in cost projections for the project have been even more striking.

In its 2006 “funding model” the AOC estimated the overall costs of the project to be $357 million with a completion date in 2009-10, a fraction of today’s estimate.

Development, consulting and hardware and software costs have ballooned more than other categories of expenses, and appear to continue on an upward climb.

Officials said at least some of the additional sums were for an expanded contract with systems developer Deloitte Consulting to add, among other things, functions that will allow CCMS to communicate with law enforcement systems.

How much the program will ultimately cost is still unclear. Budget constraints have required the agency to use $105 million originally intended for the project to instead fill other holes in the courts’ budget.

Because of the state’s fiscal crisis, the AOC now says CCMS’s completion date is up in the air, despite its vendor contract. It also says the source of funds to deploy the project are now unclear, making the final cost just as hazy.

In its August memo, the agency said a delay of even one year could cause overruns of as much as $240 million.