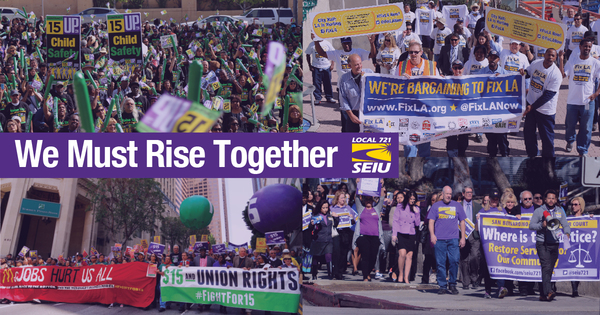 Victory of Hate Will Not Slow the Momentum of Working People; Nothing Will Stand in the Way of Achieving Our Vision of a Better Future for All of California’s Working Families

LOS ANGELES – Service Employees International Union (SEIU) Local 721 today reiterated their commitment to building a strong, inclusive economy and democracy that works for everyone in our communities. In the wake of Donald Trump’s election, Local 721 members stand ready to take dramatic action to shut down a Trump agenda that would seek to tear our communities apart and threaten the future and safety of our families.

“Our members, our families, and our communities know first-hand how potentially devastating Trump’s presidency could be for our economy and our democracy,” said SEIU Local 721 President Bob Schoonover. “But we also know that in the face of seemingly insurmountable odds, we have continued to make the impossible possible. From our Fight for $15 to Fix LA, SEIU 721 members have shown that when we raise our collective voice for working families we are unstoppable, and in the end our elected officials are held accountable to the people.”

“Trump’s anti-worker, anti-immigrant, anti-women, anti-civil rights rhetoric is nothing new,” said Adolfo Granados, an LA County public worker and member of SEIU Local 721. “For decades we’ve been told that working people’s voices don’t matter, that corporate profits are more valuable than the health and well- being of our communities. But our movements have shown something completely different: from Black Lives Matter, to the Fight for $15 and a union, to the fight for comprehensive immigration reform and action on climate change, we are continually demonstrating our commitment to countering hate with inclusiveness. Now is the time to build an even stronger commitment to our collective fight.”

“Together we’ve built a diverse, national movement of working families that has shifted our nation’s political discourse around the state of injustice and inequality in our economy,” said SEIU Local 721 Chief of Staff Gilda Valdez. “Our fight for economic, immigrant, racial, and environmental justice has never hinged on elected officials in Sacramento or Washington. Together, our collective power has led the way for historic victories for working people in California and across the country, and we’re not stopping. We know that we are stronger together, and that love will trump hate.”

“SEIU’s two million members will continue to have the backs of all of our brothers and sisters in communities across this country who may face a very real threat from tonight’s outcome,” said SEIU International President Mary Kay Henry. “We won’t stop until we build the strongest and most inclusive middle class, until the value of service and care work is realized in higher wages and the ability for workers to join together, and we have a democracy that is open and accessible to all. We will stay in the streets until our country fulfills that promise and there is justice on all fronts, economic, racial, immigrant and environmental, in every community across America.”

Key to building on our continued fight are the victories SEIU 721 members helped deliver in California, including electing Kamala Harris, Janice Hahn, Kathryn Barger, among countless others, passage of Proposition 55 and the defeat of Measure RRR. We were victorious thanks in large part to Local 721 members, who have been talking with their friends, neighbors and colleagues all year about the importance of voting for the candidates and issues up and down the ballot that matter to working families.