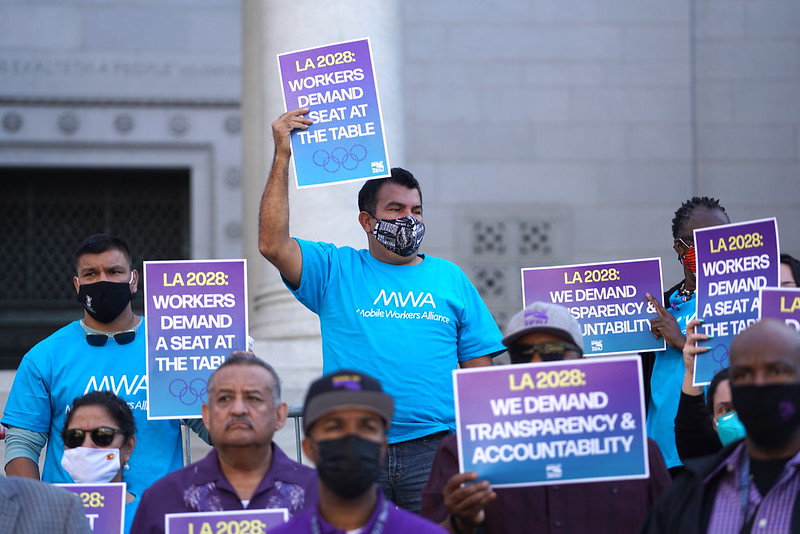 At a rally and press conference outside November 23’s LA City Council meeting, SEIU 721 and other labor groups that represent workers for fast-food restaurants, gig companies, and other entities demanded a meaningful seat at the table and a say in working conditions related to the city’s plans for the 2028 Olympics.

Workers also called on council members and city agencies to commit to transparency as they make decisions about the games that will affect thousands of workers and communities throughout the Los Angeles area. In addition, workers demanded the city ensure it has the staff and internal infrastructure necessary to handle workers’ needs and concerns.

“With a seat at the table, workers can ensure the highest labor standards possible for all projects related to the Olympics and can advocate for local hires,” said Bob Schoonover, executive director of SEIU 721.

Schoonover added: “For the Olympic games, we must prioritize maintaining LA-based union jobs and ensure that all workers — unionized or not — are paid a living wage and have access to health care and other benefits. Workers’ safety and dignity comes first, not arbitrary deadlines or cost savings.”

Last week, the City of Los Angeles released a proposed Games Agreement with LA28, the private nonprofit set to organize the 2028 games, that had few details on local hiring, transparency and accountability, and other key issues. Workers were not consulted on the agreement, even though its provisions will shape whether workers and the most vulnerable people in LA’s communities will benefit from the 2028 Olympics — or if they will be left behind as has happened in other Olympic host cities.

At the press conference, workers and labor leaders raised concerns about the Games Agreement and the process in which it was developed — and demanded that workers get a say in its provisions before it is approved by council members. They also called for transparent, worker-inclusive processes for decisions around the Olympic Games moving forward.

“We need transparency, we need concrete local hiring measures, we need public accountability for the people who are in charge,” said Simboa Wright, a city wastewater collection worker and SEIU 721’s vice president. “This is an opportunity to invest in good union jobs. That’s only going to happen if workers have a voice at the table.”