Court Reporters from the LA Superior Court joined legislative and labor allies for a press conference directly outside the Stanley Mosk Courthouse in downtown LA yesterday afternoon, determined to prevent litigants from having to pay for their own Court Reporter services in Family Court and Probate Court, as well as Writs and Receivers, effective November 14. 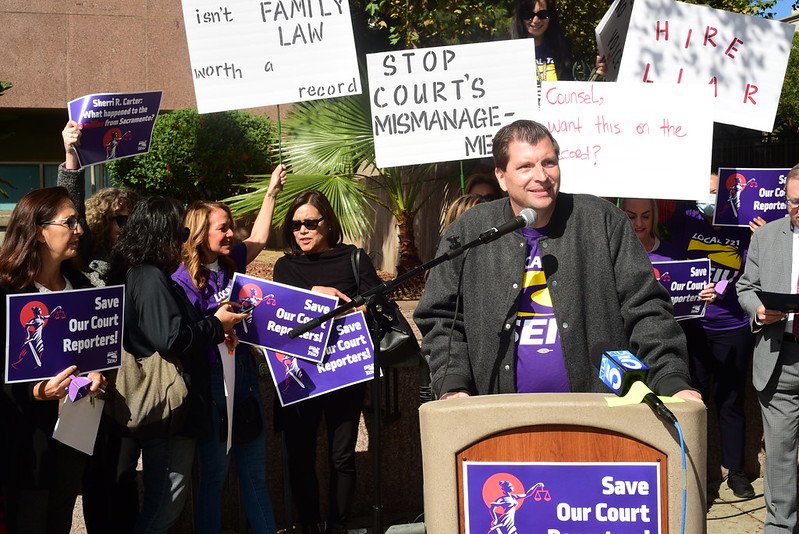 “It’s outrageous that people will have to pay hundreds of extra dollars just to get basic court access but what’s even more bewildering about this situation is that the money is already there,” said SEIU 721 President David Green. “Our own state legislators from here in Los Angeles made sure to include money in not one but two state budgets.” 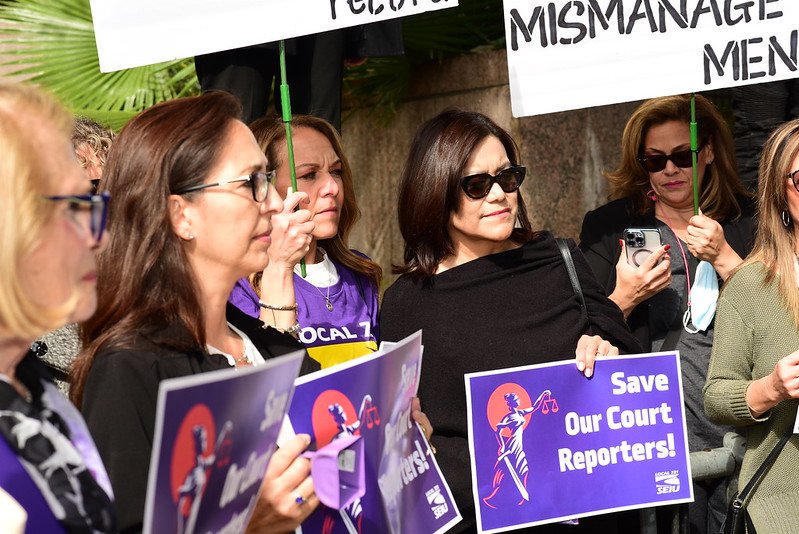 Media from KTLA Ch. 5, Ch. 7 Eyewitness News and Univisión 34 covered the lively rally and press conference, where attendees made clear their displeasure with the Court Executive Officer’s handling of public dollars meant to keep Court Reporters where they are now. Private, for-hire Court Reporter services can range from $1,500 to $2,000 per day. 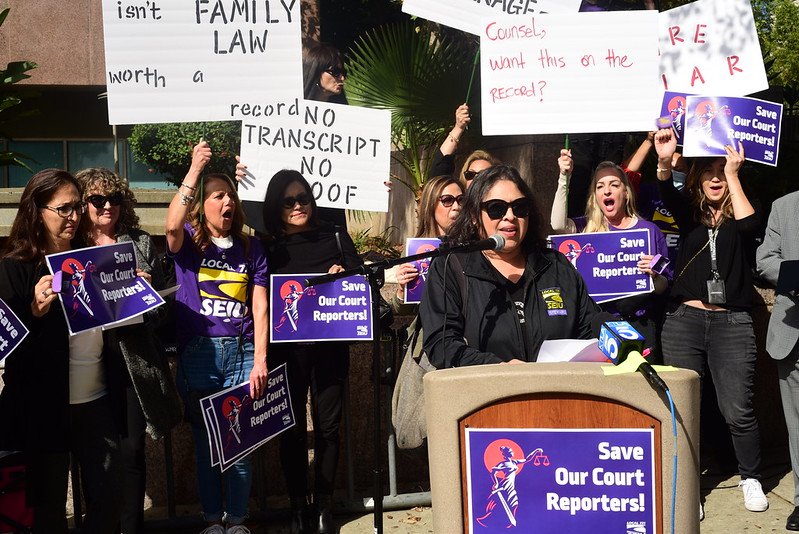 “These are positions are funded and I’m outraged that we have to be here today,” said Rose Nava, a Court Reporter for 21 years at the LA Superior Court and an SEIU 721 Union Steward. “Nobody should have to pay hundreds or thousands of extra dollars just to have their day in Court. It’s insulting for anybody to have to pay. But for the vulnerable, the people just getting by, the people without any extra dollars to spare, it is an incredible injustice. It is the opposite of what this Court is all about.”

Nava noted that the Court Executive Officer inexplicably delayed recruitment of new Court Reporters despite warnings from experts in the field many years ago about how more recruitment was precisely what was needed.

Diana Van Dyke, a Court Reporter for the past 27 years – including 21 years at the LA Superior Court – described the vital role she and her co-workers fill during official court proceedings. 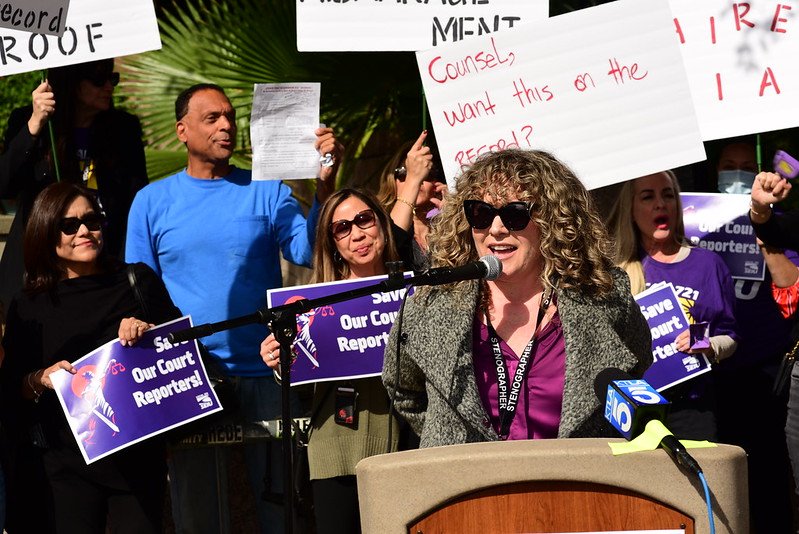 “Some of these hearings can be emotional,” Van Dyke explained. “Oftentimes, people talk, sometimes shout, over each other. Without the trained ear of a Court Reporter, important information can get lost.” 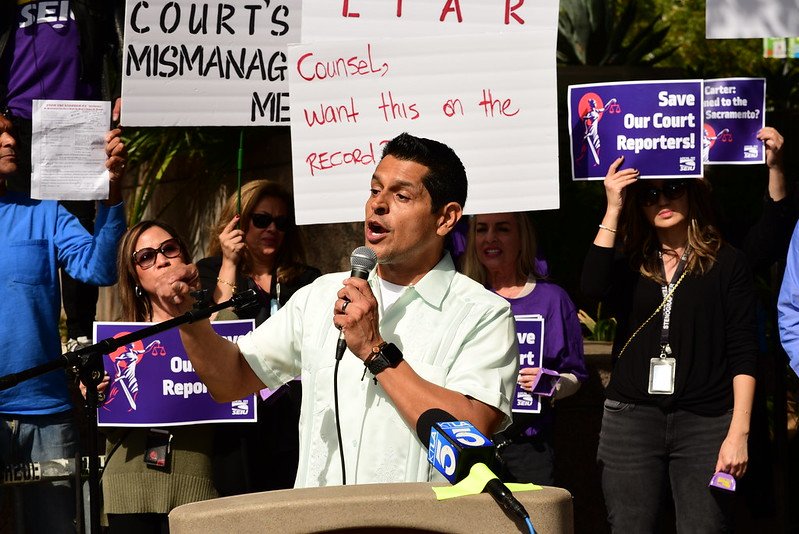 “There is a serious injustice that is happening here today,” Assemblymember Santiago said. “This injustice is about hiding the millions of dollars that the Legislature sent the Court to do their jobs. Shame on them for doing that. Why am I here? Court Reporters should be doing the work we asked them to do. When somebody comes here and needs help, we depend on Court Reporters to get the story straight. Families are now going to be asked to fork up thousands of dollars.”

But there should be no need since the Legislature already allocated $30 million for the State of California, with at least $5 million for the LA Superior Court, for Court Reporter services. Santiago vowed to hold the Court Executive Officer accountable for the diversion of funds – a sentiment Assemblymember Reggie Jones-Sawyer echoed strongly. He described how Court advocates specifically asked him to help them meet their budget deficit so they could avoid the very situation the LA Superior Court finds itself in now. 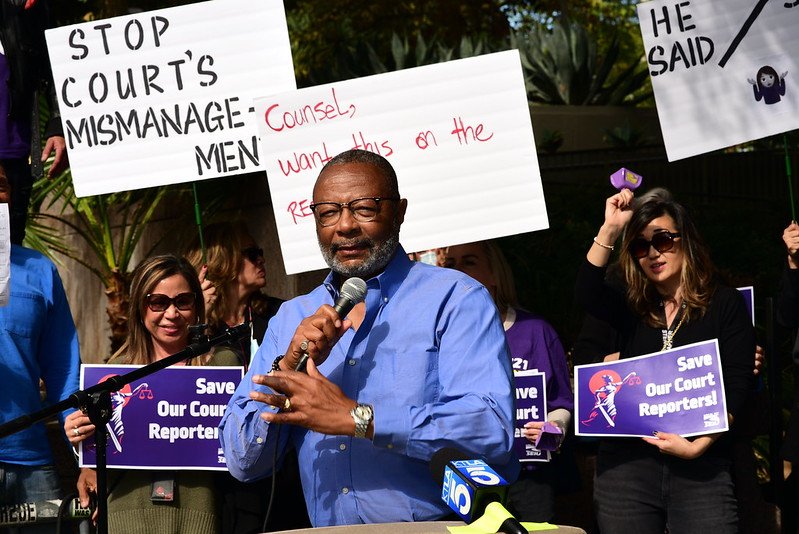 “I made a conscious effort to plug that hole and I have been successful in doing that. I got $16 million for this place,” Assemblyman Jones-Sawyer said, pointing to the courthouse behind him. “After the Court got the $16 million, the judged lied to me and told me they got the money and didn’t have to spend it on Court Reporters. The next year, I got them money but it could be spent only on Court Reporters.”

Jones-Sawyer – who is also an SEIU 721 member and who was on the state Budget Committee responsible for ensuring that the dollars for Court Reporters were included in the state budget – vowed to hold the Court Executive Officer accountable. 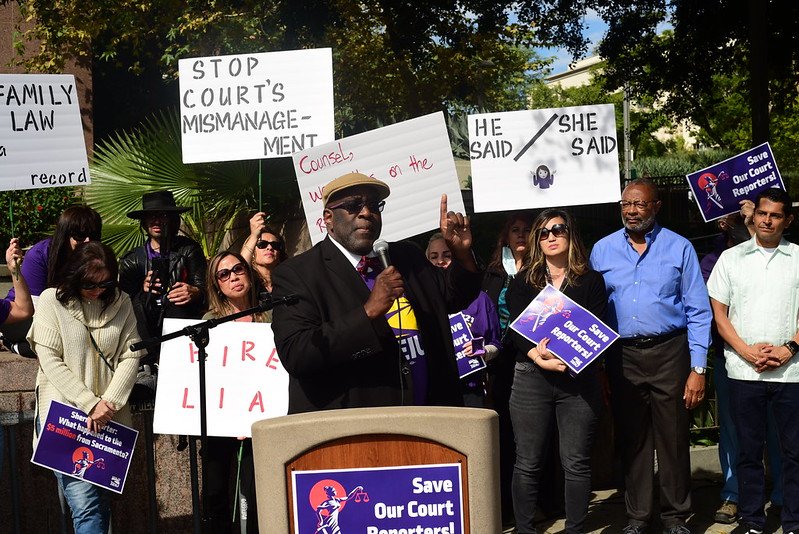 For now, you can view more pictures from today’s press conference here.

But make no mistake: This is just the beginning. We will have more to share with you in the days and weeks ahead. In the meantime, keep looking out for updates from us and stay strong on the frontline. Together, we win!