Public workers are under attack. But who are public workers? They’re the people who collect your trash, keep your drinking water clean, maintain your parks and ensure that traffic lights function.

Let’s face it: We often take the services they provide for granted. Watch this video about one public worker you won’t soon forget.


Last spring, at an open house event hosted by the City of Los Angeles Bureau of Sanitation, one family turned out wearing custom T-shirts that read “Kenny Fox Rocks.” 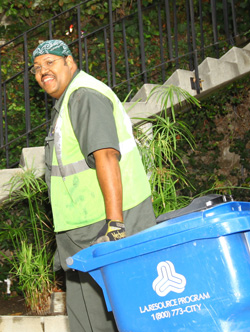 Who’s Kenny Fox? A City of LA refuse truck operator.
It’s not hard to understand why Fox, who’s been on the job since 1988, is a local hero in the Northeast LA neighborhoods where he works.
Residents know him well, and say he goes the extra mile to help people, moving seniors’ cans to the curb and interacting with children.
Fox’s dedication to his job has not gone unnoticed. In July 2010, he was awarded the “Going Beyond Expectations” Award, given by the Board of Public Works to LA City employees who show exceptional service.
So what motivates Kenny, as his friends know him, to get out there every morning at the crack of dawn and pick up the trash?
“I just enjoy it,” he says with a smile on his face. And if you want a smile on your face, just watch this short video of Kenny in action.

I sincerely got a kick from your article. I really do not truly have much to say in response, I only wanted to comment to reply great work
buy & selling goods

I sincerely got a kick from your article. I really do not truly have much to say in response, I only wanted to comment to reply great work
buy & selling goods