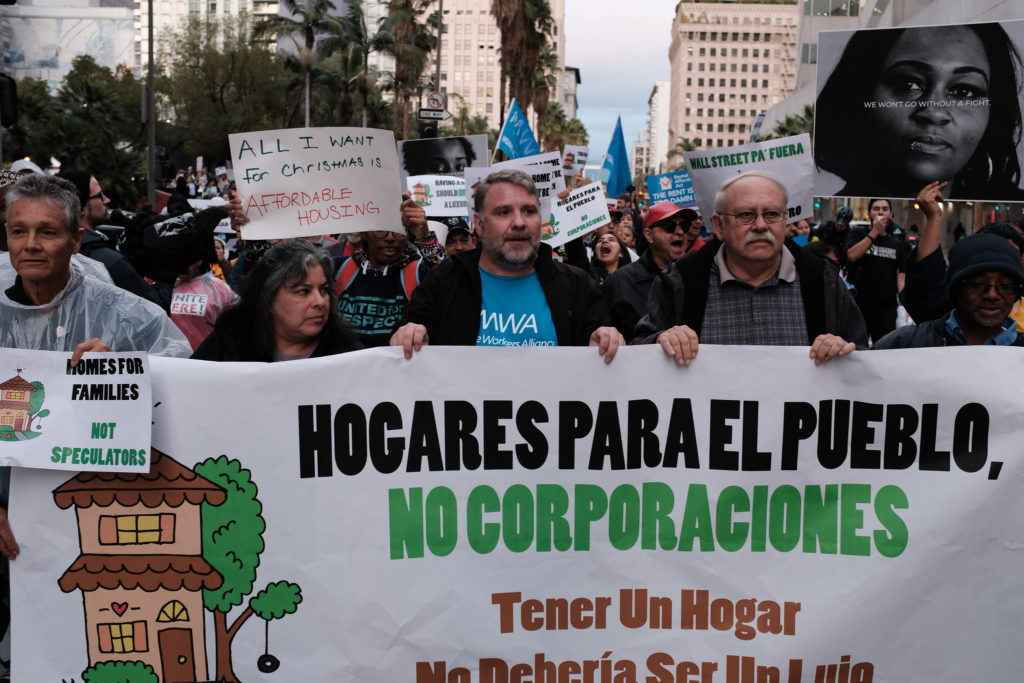 As storm clouds loomed overhead, hundreds of marchers descended on downtown Los Angeles streets to decry the glut of luxury condo units dominating the skyline while tens of thousands of unhoused Angelenos prepared to sleep on the streets or in their cars. 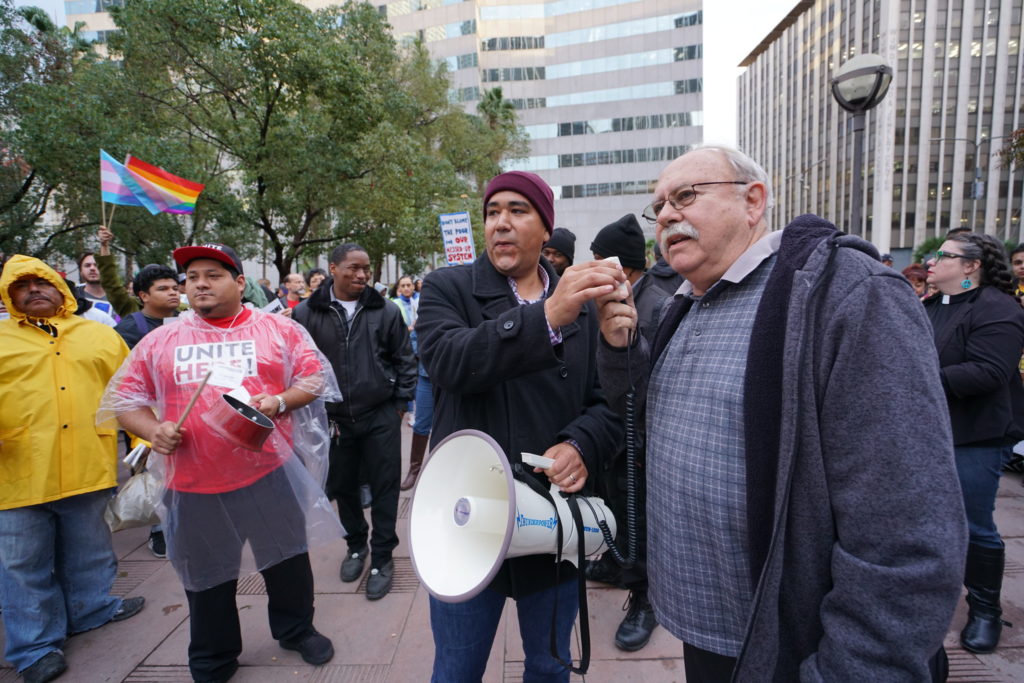 The report details how, in 2017, three vacant housing units existed for every one homeless person in Los Angeles, as more than 103,000 housing units in the city remained unoccupied – oftentimes held by the wealthy as an investment, not as a primary residence.

At that time, the Los Angeles Homeless Services Authority (LAHSA) tabulated that 33,138 unhoused residents lived in Los Angeles. The number of homeless people in Los Angeles has increased since 2017, with LAHSA now declaring that between 50,000 to 60,000 people may be found homeless on any given night in Los Angeles County – and more than 44,000 of them are living on the streets. 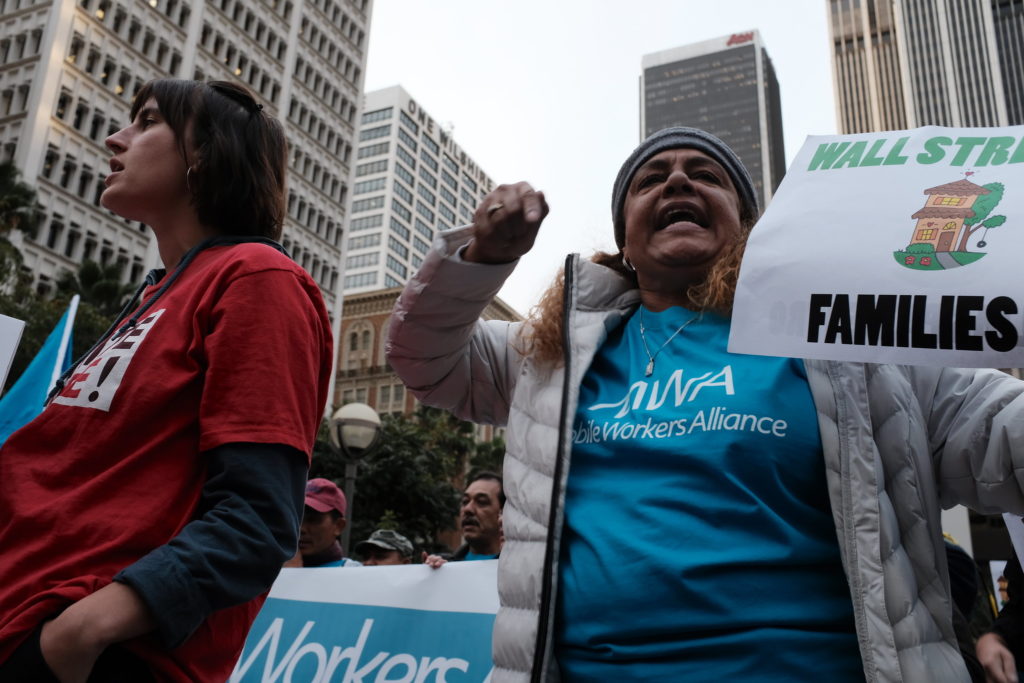 But it also included homeless families and people on the verge of eviction as well as low-income residents and workers – including members of the Mobile Workers Alliance. 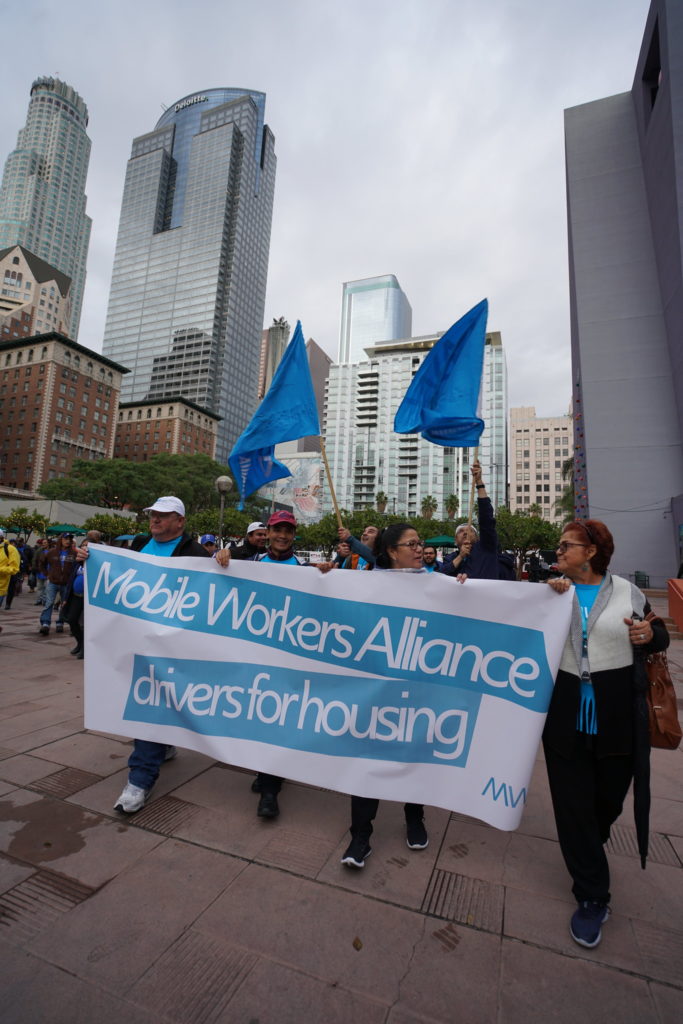 The MWA represents rideshare drivers, organizing alongside SEIU Local 721. They are primarily employed by Uber and Lyft – and their actions have dominated national conversation on the Gig Economy, as they continue to fight for proper job classification, worker protections and union rights. 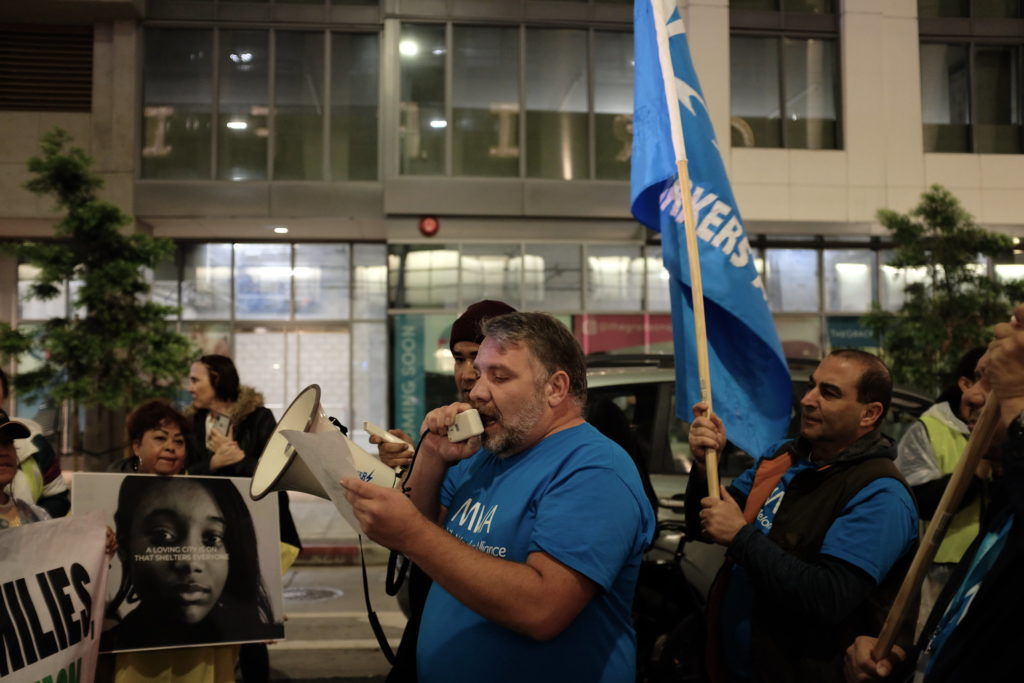 “We need an economy that creates high-quality jobs – good union jobs with fair wages, decent benefits and basic protections for workers,” said MWA member Rick Heintz, who drives with Lyft and recently found himself unhoused after enduring a perfect storm of unfortunate events – accelerated in large part Lyft’s predatory lease practices. “There is a direct connection between an economy that creates poverty jobs and the housing affordability crisis we now see all around us.” 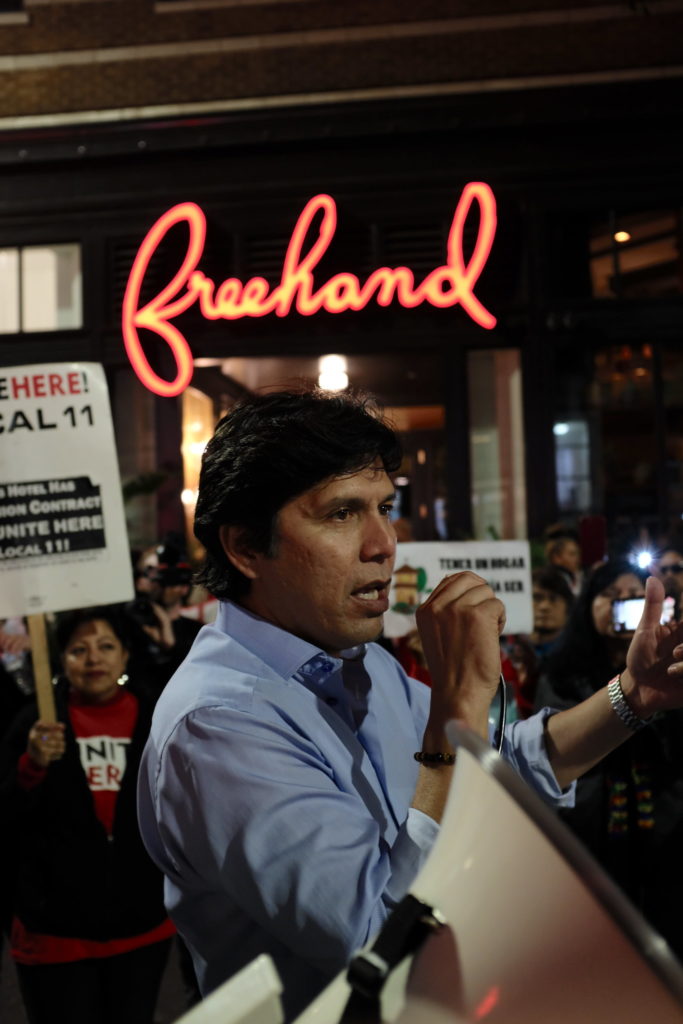 The march route included a stop at the Freehand Hotel. There, striking UNITE Here Local 11 workers and L.A. City Council candidate Kevin De Leon joined the protest, with the march shutting down a portion of 8th Street and completely stopping rush hour traffic there. 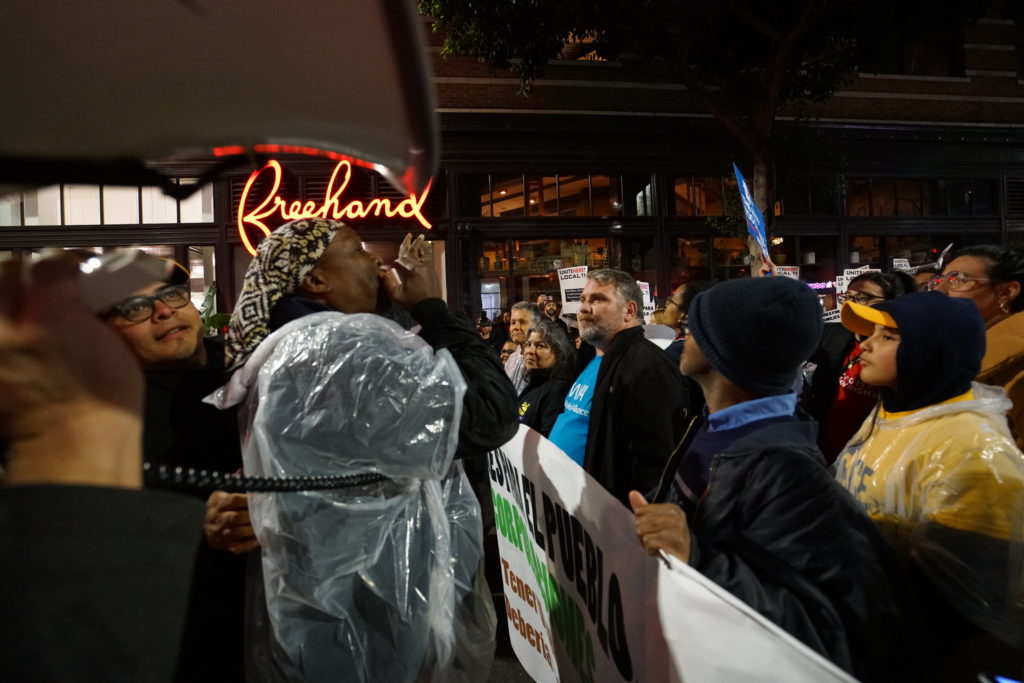 “For years, we were assured that all the building cranes jutting across the Los Angeles skyline were proof of a booming economy and that a rising tide would lift all boats,” said Bob Schoonover, President of SEIU 721 and SEIU California. “Instead, a lot of us with full time jobs are barely treading water as we’ve seen downtown LA transform into a playground for the very rich. We got all the luxury housing we never asked for and we got very little of the affordable housing this entire city has been crying out for.” 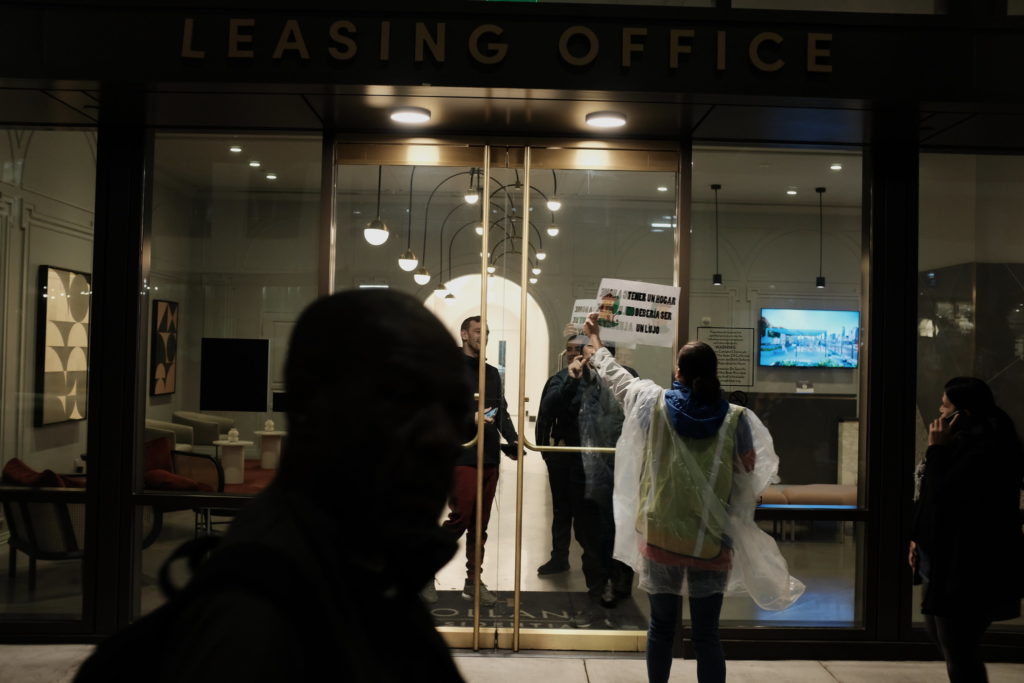 “It is absolutely unacceptable for anyone to work a full time job and still find themselves without a home,” Schoonover continued. “Well, we’ve had enough. The union movement is growing because workers have had it with the race to the bottom. They have had it with an economy whose bounty is enjoyed only by the richest of the rich while the rest of us fight over scraps. And they have had it with being told that this is just the best we can do. We know we can do better – and we will.”