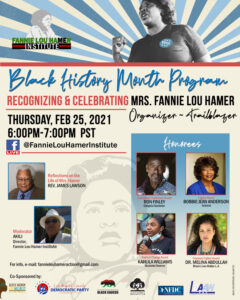 SEIU 721 Members are invited to attend this online event celebrating one of our labor heroes!

The Fannie Lou Hamer Institute is hosting a program celebrating its namesake on Facebook Live on Thursday, Feb. 25 at 6 p.m.

In addition to her work in labor, she was also a voting rights activist, civil rights leader, and philanthropist.

Fannie Lou Hamer was the last of 20 children born to Mississippi sharecropper parents. She was instrumental in organizing Mississippi Freedom Summer for the Student Nonviolent Coordinating Committee (SNCC), and later became the Vice-Chair of the Mississippi Freedom Democratic Party, attending the 1964 Democratic National Convention in Atlantic City, N.J., in that capacity.

Her plainspoken manner and fervent belief in the Biblical righteousness of her cause gained her a reputation as an electrifying speaker. She ran for Congress in 1964 and 1965, and was seated as a member of Mississippi’s official delegation to the Democratic National Convention of 1968, where she was an outspoken critic of the Vietnam War.

She died in 1977 at the age of 57. Her tombstone is engraved with one of her famous quotes, “I am sick and tired of being sick and tired.”

Plan to attend this special event!