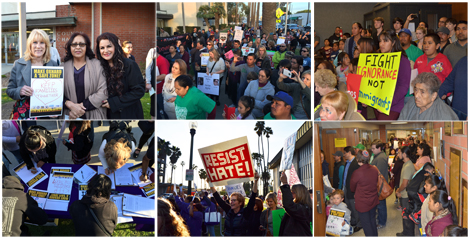 In response to draconian anti-immigrant measures being enacted nationwide by the Trump Administration, over 400 SEIU Local 721 members joined community activists and concerned families at last night’s Oxnard City Council meeting to demand that authorities make Oxnard a “Safe City” for all people living there.

Fear of deportation is skyrocketing in communities across California, including Oxnard, where nearly 73% of the 200,000 person population is Latino – and many are immigrants. SEIU Local 721 members described to Oxnard City Councilmembers in alarming detail how this fear is damaging community safety and public health.  The reality is that Oxnard residents are afraid – so fearful, in fact, that they are suffering unnecessarily instead of getting the healthcare they need.

One SEIU Local 721 member reported how, since Trump Administration took office, fewer patients are being admitted basic health care services at the Ventura County Medical Center. This is an ominous sign. The member also described how parents are waiting for their children’s illnesses to reach a crisis point – even spitting up blood – before taking them to the hospital due to fear of deportation.

When the community is afraid to use public health care services, social services, fire protection services, or local law enforcement services, then the entire neighborhood is at risk. This issue goes beyond immigration policy. It’s about facts – because disease doesn’t discriminate. Illness spreads no matter what our immigration status is.  And it’s about basic human compassion – because decent people don’t watch their fellow neighbors suffer needlessly.

Access to health care is a human right, especially in the wealthiest nation in the world. And make no mistake – immigrants have helped make America wealthy. They work hard, for long hours, in vital jobs, usually for low pay, and often in industries that make billions of dollars in profit annually. Whether or not we stand up for them by demanding to make Oxnard a “Safe City” is the moral challenge of our era that the members of SEIU Local 721 are determined to meet!

SEIU Local 721 members working for the City of Oxnard and the County of Ventura provide myriad public services to residents from all walks of life. We will not succumb to fear. We will defend the public we serve. And we will fight back against bigotry with everything we’ve got. We will demand that the City of Oxnard adopt a “Safe City” policy and divest local taxpayer dollars from federal immigration law enforcement – because effective community policing requires people to trust law enforcement, not fear them.

The Oxnard City Council received a message loud and clear that SEIU Local 721 members are in this fight for the long haul because, to quote the late Dr. Martin Luther King, Jr., “An injustice anywhere is a threat to justice everywhere.” We are pushing to officially make Oxnard a Safe City by the end of March – and we will keep you posted on our next action!