The tentative agreement brings the long and arduous battle for a fair contract one step closer to an end. In April, SEIU Local 721 members voted to authorize a strike after negotiations faltered. The looming threat of the first strike by LA City Workers in more than 30 years immediately brought movement at the bargaining table.

The Tentative Agreement now moves to LA City Workers who will have the opportunity to ratify their 4-year contract after working a year plus without a contract. 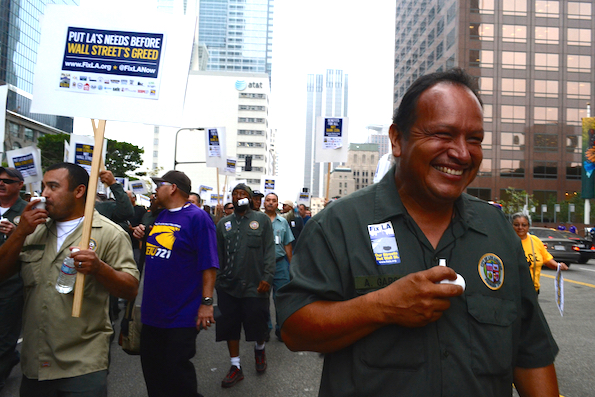 SEIU Local 721 members will be receiving further information including details of the tentative agreement, ballots and voting instructions via mail. Members should also be on the look out for their worksite organizers in the coming weeks.

The agreement must be ratified by the Coalition’s individual union members before moving on to the Los Angeles City Council for adoption and final approval by the Mayor.

“I am proud to announce that we have reached a tentative contract agreement with the Coalition of LA City Unions that prioritizes service delivery and strengthens our long-term fiscal health. Together, we have achieved a fair and fiscally responsible contract that allows the City to restore and improve the services our residents need and deserve, while strengthening our budget position,” said Mayor Eric Garcetti.

“After more than a year of good faith bargaining between all parties I am pleased we were able to come to a tentative agreement putting the City on a more certain financial footing. I am optimistic the City’s employees will view the agreement as fair and reasonable and ultimately vote to ratify the contract,” said Los Angeles City Council President Herb Wesson.

The agreement puts the City in a strong position to rebuild its workforce by maximizing full-time hiring and proposing a robust job-training program.

“Our City workers held strong at the bargaining table and worked with the City to reach an agreement that addresses the concerns of City workers and our communities,” said Cheryl Parisi, Chair of the Coalition of LA City Unions.  “We set out to Fix LA and this agreement does exactly that.”

“The service and job cuts in the last seven years hit disadvantaged communities the hardest, getting LA back on track requires protecting good-paying jobs and a strong local hire and training program; this tentative agreement promises to deliver the key components needed to restore vital services and create the prosperous neighborhoods Angelenos desperately need,” said Rev. William Smart, President of the Southern Christian Leadership Conference of Southern California and member of the Fix LA Coalition.

Today’s announcement is the product of nearly a year and a half of meetings and negotiations at the bargaining table which included for the first time ever the participation of the Fix LA Coalition made up of community residents and advocates.

Full details of the agreement will be released once the City worker membership reviews and votes to ratify the agreement.