As taxpayers throughout the County race to meet their tax obligations on Tax Day, Riverside County SEIU Local 721 and community advocates gathered on the steps of the Riverside County Board of Supervisors for a press conference to condemn the up to $119 million in taxpayer waste by the County and demand its CEO Jay Orr renegotiate a toxic swap deal with Wells Fargo.

The condemnation from the County’s frontline workers and community advocates comes at a time Riverside County is proposing reckless cuts at the bargaining table on the back of public employees and at the cost of cuts in services. The mismanagement of public dollars has inhibited Riverside County from prioritizing funding for the urgent needs in the County.

As the County proposes senseless cuts at the bargaining table, patient wait times at Emergency Rooms and health clinics have skyrocketed, vulnerable foster children are getting less high-quality supervision, and unsafe conditions at both mental health clinics and incarceration facilities force staff to fund their own self-defense courses (watch video). 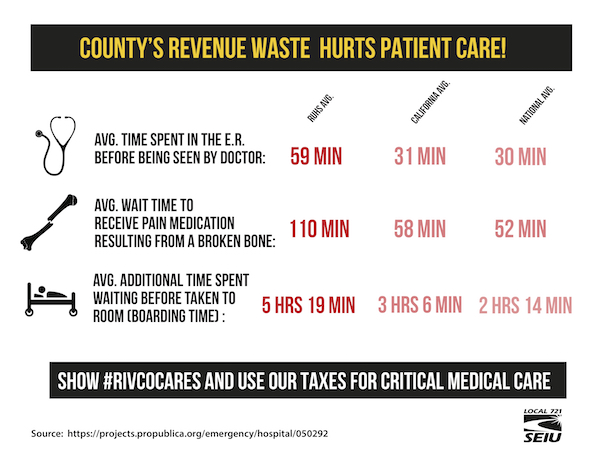 “The lack of investment in the critical frontline services has made recruitment and retention of County employees more challenging than ever,” said Children’s Social Services Supervisor Tamara Trotter. “As a result, staffing levels in many departments across the County are at a crisis point, with caseloads and workloads reaching unmanageable and often dangerous levels.”

“Riverside County residents cannot sit idly by as the County continues to dish out millions of dollars on their poor decisions, while at the same time proposing deep cuts to the key services Riverside families depend on,” she added. 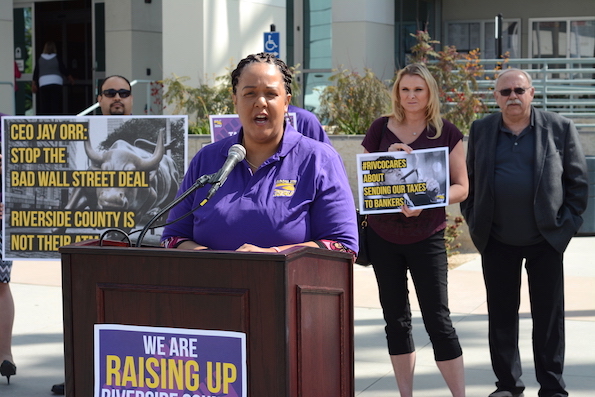 While the County is on pace to burn up $119 million in taxpayer waste, $98.6 million has already been drained from the County tax coffers in lucrative consulting contracts and a toxic “interest rate swap” deal entered into in the year 2000. In the “swap deal,” approved by a body of Board of Supervisors that included Supervisor John Tavaglione, the County was sold on the idea of an interest rate swap as a means of achieving a lower “synthetic” fixed rate than could be achieved by issuing plain vanilla fixed-rate bonds.  Riverside County was not alone in being duped into these swap deals; other municipalities like the City of Richmond, the City of San Francisco, and Jefferson County in Alabama also made similar dealings.

As a result of entering into this bad deal, the County has already paid $48.9 million in excessive fees and is on the hook for up to $20.5 million more until the deal ends in 2032, totaling a possible $69.4 million in wasted taxpayer money. At the time the County considered this deal, it could have issued variable rate debt with no swap and saved up to $69.4 million in bank fees over the life of this bad deal.

“As a taxpayer, I would like to put my trust in the County leadership to ensure my money is going where it’s needed and back room deals are not part and parcel of their business,” said Disability Rights champion Ruthee Goldkorn.

“Our taxpayer funds should be used to keep us safe, to keep our children healthy, and to care for our County’s most vulnerable.  Current actions by the County say any such trust is misplaced.” 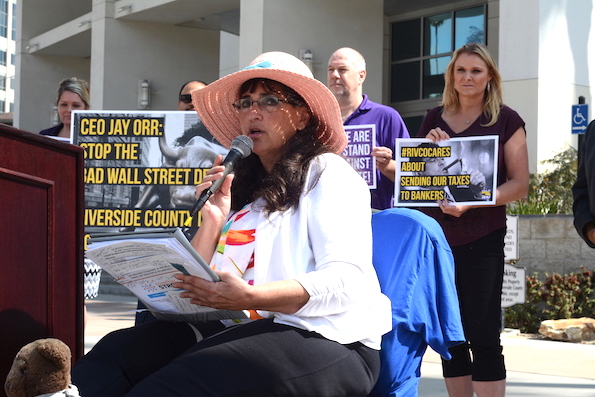 Unlike Riverside County, other municipalities and agencies duped into toxic swap deals have all successfully renegotiated the terms of their bank deals. To date, there is no record of Riverside County CEO Jay Orr attempting to renegotiate the toxic swap deal with Wells Fargo in order to save millions that could be used for critical County services.

SEIU 721 members and community advocates are united in their demands that Wells Fargo either reduce the County’s synthetic fixed rate or allow the County to end the deal with no termination fee. 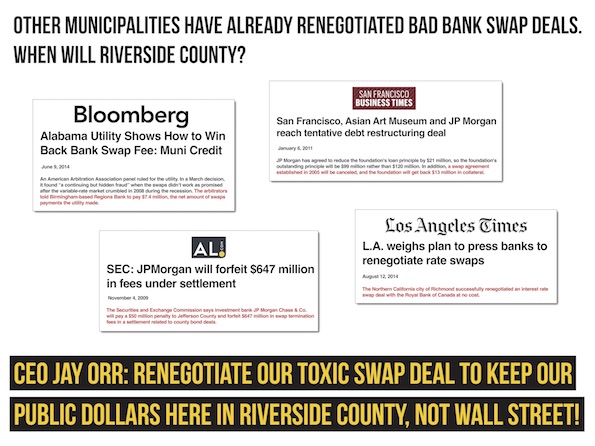 “I’m here today to call on our County CEO, Jay Orr, to stand up for community health and renegotiate the County’s toxic bank swap deal with Wells Fargo.” 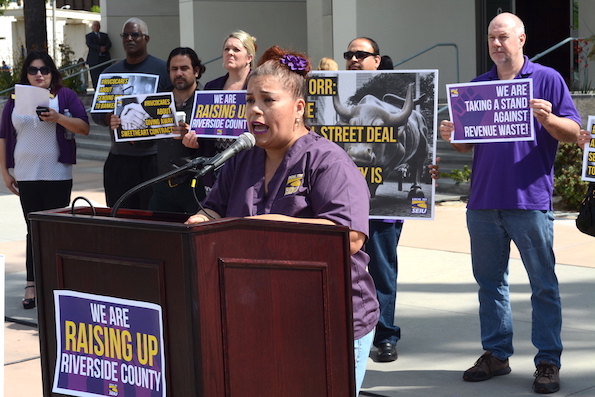 The press conference marks the first time the County’s toxic swap deal has been aired out to the general public and is a key point in the SEIU Local 721 Bargaining Team’s platform at the bargaining table.  The platform champions a contract that cuts revenue waste, brings up the quality of services, restores services, and brings greater worker and public safety

As the bargaining fight heats up, SEIU 721 members have proven time and time again that they are committed and ready to continue standing up the County’s reckless proposals and will fight until the very end for a contract that puts community and workers first, and Wall Street last. 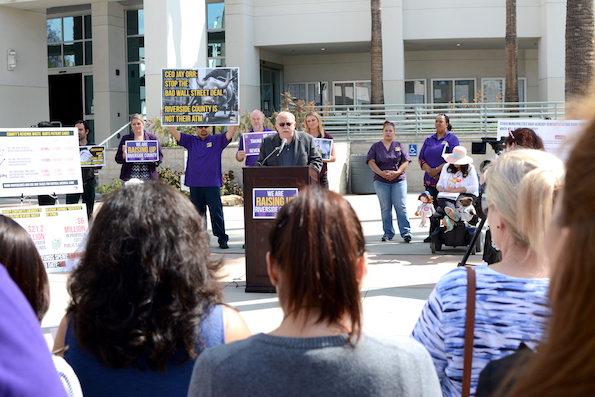 “It is time to Raise Up Riverside. Time to invest tax payer dollars back in the community with good paying jobs, filing vacancies and expanding the critical services needed in our community,” said SEIU Local 721 President Bob Schoonover.

How Much is the KPMG Sweet-heart contract costing us?