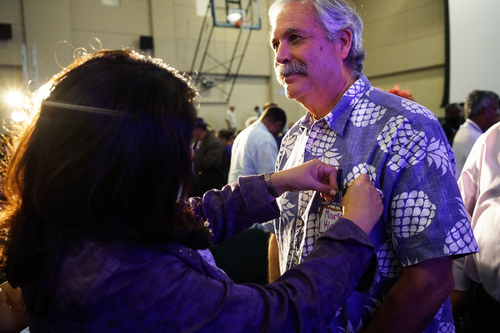 In a milestone moment for SEIU Local 721, hundreds of members took the oath to become Rise & Resist Leaders at an inaugural Unity Summit held at St. Sophia Cathedral in South Los Angeles this past Saturday, July 22.

“Our union is facing a serious threat – the threat of being torn apart,” said Bob Schoonover, President of SEIU Local 721. “The forces of greed want to divide our union and weaken our power, from the bargaining table at home all the way to Washington, D.C.  We are here today because every single one of us has way too much to lose to let that happen!” 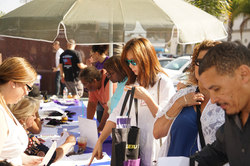 “This fight is real,” said Linda Dent, Vice President of SEIU Local 721. “Having a union has given us the right to bargain for a better way of life. Back in the day, when we wanted to negotiate our contracts, we had no power. But as we built up membership, we gained job security, better benefits and raises. And we are doing this not just for ourselves but for future generations – our children and our grandchildren.”

Members were treated to an especially moving testimony by Cindy Jones, a member of SEIU Healthcare Wisconsin. She described how unions there were decimated when Governor Scott Walker effectively turned Wisconsin into a right-to-work state by signing Act 10.

“Now we all have to work harder for less,” said Cindy Jones of SEIU Healthcare Wisconsin. “Because of Act 10, Wisconsin’s once-proud public sector unions are gone. Those that are still around have lost between 70% to 80% of their original membership. My only question to you is: What are you going to do? I know you’re going to fight! I wish you good luck and I’m with you in solidarity!

SEIU Local 721 members performed a fun skit illustrating the monstrous motives of the right-to-work attack – and they made a formal Rise & Resist Presentation for members in attendance to replicate at their respective worksites.

The presentation enumerated why our union matters to us SEIU Local 721 members – and why it should matter to workers across America.

“United we bargain but divided we beg,” explained Charlotte Ramos. “Because we are a union, we can negotiate for good healthcare, living wages, retirement, job security, paid vacation, paid sick leave, a guaranteed voice at work, seniority, bilingual pay, shift differentials and fair work schedules. Most American workers today have the opposite. They have to beg for these things because they don’t have a strong, united voice.” 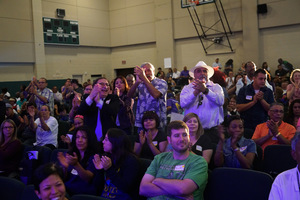 The Rise & Resist Presentation also covered how the right-to-work movement is really a Trojan horse attack on America’s working families by the forces of greed.

“Their goal is to get even wealthier by taking what you have!” said Lillian Cabral. “Their goal is to fool you and your fellow union members into giving up your voice and your ability to bargain. That’s why we say the right-to-work is really a Trojan horse. It looks like a gift but it’s really meant to hurt you!”

Members also enumerated all the ways our union makes lives better both for ourselves and for the greater community.

“The services we provide matter,” said Rosa Castro. “Politicians like to brag about increasing all kinds of services to their constituents. But the cold, hard truth is that many improvements happen because organized labor demands them,” she said, citing both the “Fix L.A.” and the “Fight for $15 and a Union” campaigns as examples.

The Rise & Resist Presentation concluded with specific ways members could organize and take action – from calling worksite organizers when anti-union forces descend on the workplace to being a dues-paying member of the Committee on Political Education (COPE).

“Give to COPE,” said Sharonda Wade. “That’s how we have a fighting chance against the forces of greed who want to destroy our union voice. And choose union!  Simple things like keeping your contact information up-to-date and filling out your two-signature membership card make a huge difference in our ability to stay connected, organize effectively and rise together!”

Throughout the day, members viewed several fascinating videos illustrating exactly what is at stake if the right-to-work attack succeeds. Videos included “The Wisconsin Experience” – which chronicled how unions were decimated in that state – as well as “Why Right-to-Work Is Wrong” by Robert Reich of Princeton University and the AFSCME-produced “Union Fair Share Fees Explained.”

Members participated in break-out sessions where they swapped stories on how the union has personally made the difference for them. They also took turns making the Rise & Resist Presentation to each other.

The Unity Summit reached its highlight when SEIU Local 721 President Bob Schoonover and Vice President Linda Dent officiated a formal ceremony during which members signed their Rise & Resist Commitment cards and took an oath to become Rise & Resist Leaders. Members then pinned each other with special Rise & Resist memorabilia, confirming their commitment to the Rise & Resist Movement.