While these laws have received an impressive amount of attention lately, so-called “Right to Work” legislation is nothing new. In fact, these laws have a nasty history that dates back more than 70 years.

“Right to Work” is the creation of Vance Muse, a far-right segregationist and oil lobbyist from Houston. Muse’s hateful views included opposing women’s suffrage, child labor laws, and integration. In the 1940s, Muse set his sights on unions.

Unions were growing in power in the South during the 1930s, which was a twofold threat to the established order. First, unionization meant that workers could collectively bargain for a bigger slice of the pie and second, unions opposed Jim Crow and segregation. Neither of these things sat well with well monied interests in the South.

Muse and his allies used racial resentment as a wedge to divide workers and promote “Right to Work.” Muse knew that many white people in the segregated South believed that black and white workers shouldn’t be in the same unions, and he preyed on these beliefs while lobbying for his anti-worker legislation.

Muse convinced white workers that they would be better off and have better jobs if black workers weren’t allowed to unionize. What these white workers didn’t understand was that Muse’s real aim was to take bargaining power away from all workers. The goal of “Right to Work” has always been to destroy unions, to divide and conquer – making it easy for the rich to take as much as they can from all working people.

Muse’s strategy was successful, as “Right to Work” laws were passed in 14 predominantly Southern states by 1947. This meant all workers in the South, black and white alike, were easily exploited by the rich.

In 1964, Martin Luther King, Jr. himself campaigned against “Right to Work” in Oklahoma. 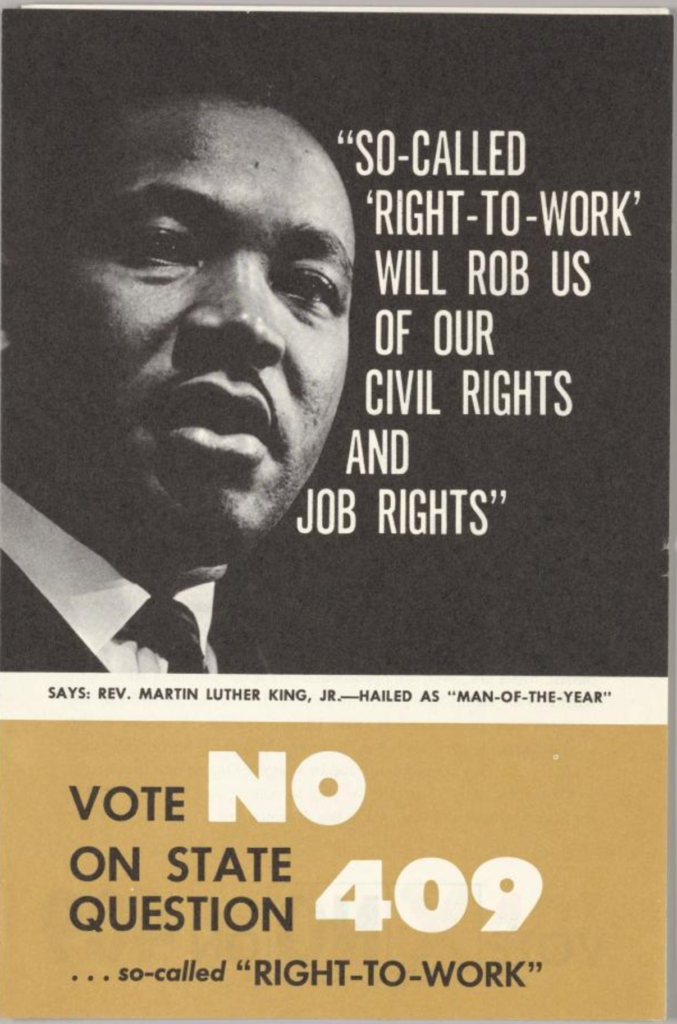 Since that time, the open prejudices that Muse exploited are no longer acceptable, but “Right to Work” still marches on. Bosses are still greedy, they still want to destroy unions and they still lie and tell workers they’ll be better off without a union.

Their lies are working. Twenty-eight states now have Right to Work laws, which means that workers in 28 states are now working for lower wages, with fewer benefits and in less safe conditions. Without a union, they’ve got no one to turn to when they’re treated unfairly or placed in danger. Meanwhile, the people behind “Right to Work” just get richer.

As “Right to Work” has slowly gobbled up states across the country, its backers have even bigger plans. Their intention is make “Right to Work” a federal mandate and take down all of the unions in one blow, but there is hope.

Missouri is the latest state to pass “Right to Work” laws, but workers aren’t giving up that easily. Union members and allies have been collecting signatures to force a statewide referendum on “Right to Work” — and fighting tooth and nail to stop “Right to Work” legislation dead in its tracks.

This is why people like Muse and his descendants are always attacking us, they know that they can never take down a people united, so they try to divide us. They lie today like they lied in the 40s, saying that getting rid of your union will somehow make you better off than the person next to you. We’re not going to fall for it. We’re going to resist, because together, we win.

Well, well, if we remember the history of the foundation of this country not much has changed. The white racist ruling powers & mentality of the South is still alive and thriving today….Their tactics are consistant in the divide-and-conquer approach. The white working class continue to fall for these tactics because of their own inherent racist mentality…I did not realize Right-to-Work dates back so far…The greed is mind boggling & driven by hatred…We have to educate ourselves to be inspired & driven to fight for what, by birthright, we are entitled to!!!; and to thrawt & derail this plan to… Read more »