LA County workers in various Radiological classes have proven once again: Together We Win!

SEIU 721 members have been fighting for nearly two years to correct an unintended wage inequity issue created in the 2015-18 contract. The wage change resulted in some entry level classifications being paid more than advanced-classification employees who have additional licensing and education.

For months frontline workers have been telling management how the discrepancy makes it harder to recruit and retain critical radiology and medical imaging staff.

After conducting a review and agreeing that a manpower shortage does exist, the county approved new salary ranges to bring pay for the affected classes on par with neighboring hospitals.

This victory is a prime example of how SEIU 721 members are working to protect the middle class. By refusing to give up they’ve helped ensure LA County won’t lose top-level radiological professionals to other counties who are offering higher, industry-standard salaries.  That means LA County residents will continue receiving the high-quality care they deserve. 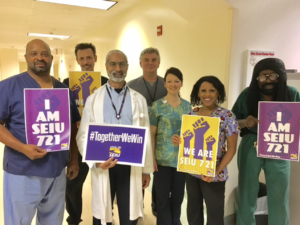 It’s also a testament to the power unionized workers have when they come together.

“This is a big achievement for everybody, it’s a win for a lifetime,” said Joginder Gill, an SEUI 721 Steward and Radiation Therapist at LAC+USC who was instrumental in keeping the fight going. Gill organized his co-workers, who wrote letters to management, signed petitions and kept believing they would be victorious.

“A lot of this is about the principal, what is right, what is fair,” Gill said. “This is what made me become a union steward because without the union nobody was going to talk to me.”

Gill met with SEIU 721 leaders and with their backing he was able to arrange meetings with upper management and make sure he and his colleagues were heard at work.

“Without the union I would be just a regular employee just going to work and going home every day but by being involved I was able to get things done,” he said.

About 100 workers are in the seven affected classifications and will see their salaries increase by 10, 15 or 20 percent. Most of the new salary ranges became effective January 1, 2018 and ranges for one of the classes will be implemented on June 30, 2018.

Congratulations to Gill and his colleagues at LAC+USC, Olive View-UCLA Medical Center, Rancho Los Amigos, and MLK Jr. Outpatient Center, who continued to fight for what was fair and what is right. Partnership and Persistence Pays Off!

If you are in one of the affected classes and would like more information, contact Member Connection at 877-721-4YOU.