Local clergy and other members of the community are showing their support for Watts workers!

Watts Healthcare Corporation workers hosted a “WE Care for Watts” prayer circle on Thursday, which had been the last scheduled bargaining day in a series of contract negotiations that WHC management has been dragging on for more than six months. 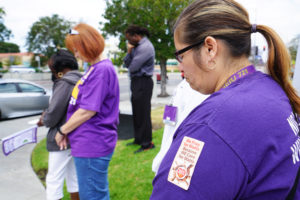 The current contract was temporarily extended since it expired on Dec. 31, 2017. During that time WHC leadership has put forth unacceptable contract proposals including raising employee healthcare contributions by up to 200% without a significant raise in wages to mitigate the surge in healthcare costs.

On Thursday the bargaining team voted to extend the contract to June 19, also known as Juneteenth, which is historically significant as the day when Texas slaves were finally freed in 1865. 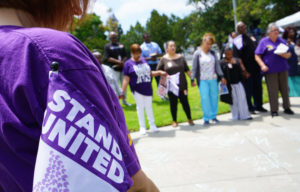 SEIU 721 Vice President Linda Dent addressed the prayer circle crowd, which included Rev. Cue Jn-Marie, Rabbi Jonathan Klein and Pastor Larry Dozier, saying workers will not back down and encouraging management at the flagship South LA clinic to do the right thing.

“This is shameful that the people who are providing care for our communities are struggling and won’t be able to pay for healthcare for themselves and their children,” Dent said. “That’s a downright disgrace and we are not going to settle for that.”

Attendees clasped hands and stood in a circle to pray with one another. At times drivers going down the busy street honked their horns and cheered in support of the workers.

Patients and community members have been showing their solidarity with workers during this fight by purpling up alongside staff, wearing stickers, and writing messages during our “Chalk the Walk” action. The LA Sentinel has also published a story about the Watts workers fighting to keep quality care staff in the community. 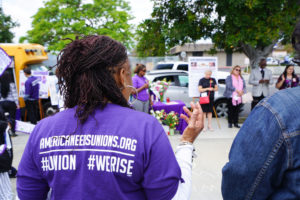 Workers say management’s proposals to date leave WHC’s perennially short-staffed facilities at risk of losing dedicated employees to other institutions that offer industry-standard wages and access to basic benefits. On top of that, leadership has taken an anti-union attitude and has broken labor laws by retaliating against bargaining team members and temporary staff.

That led SEIU 721 to file three Unfair Labor Practice charges with the National Labor Relations Board and last week workers authorized a ULP strike with a 99% yes vote!

During the ceremony, clergy members performed a blessing for Marlo Williamson, a member of the bargaining team who management retaliated against by laying her off after nearly 30 years of working at the facility.

Williamson, a model employee who had never been written up in her career, said the prayer circle left her feeling energized and even more determined to keep fighting. 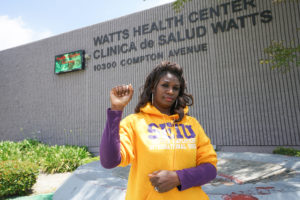 Rabbi Klein also said the center’s administrators should be ashamed of their actions and likened the fight to that of the Biblical struggle between David and Goliath.

“The workers are right and God is on your side,” he said. “David won that fight and you will too.”

Stay tuned as bargaining continues and workers keep fighting for a fair contract that protects the public. Rabbi Klein is absolutely right: when we fight we win! 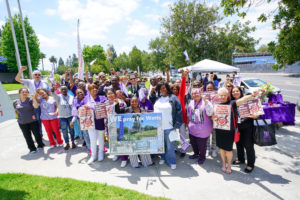 –SEIU 721 represents more than half of WHC’s staff.

– WHC employees live in Watts and the surrounding communities. Many of them (17.7%) earn less than $15 an hour and are themselves living at or below 200-250% of the federal poverty level.

-A single person currently paying $150/month would see their rates double to $300/month under the proposed contract.

– WHC is offering a below-average differential for bilingual workers who provide culturally competent care in an area where nearly 70% of households report speaking Spanish at home.

– Leadership refuses to adjust wages of several positions that are woefully below the market rate, leading to high turnover, especially in nursing.

-SEIU 721 has filed three Unfair Labor Practice charges with the National Labor Relations Board in response to WHC breaking labor laws by retaliating against bargaining team members and temporary employees.