With the local economy in full recovery mode, the Fix L.A. Coalition demanded during official testimony before the L.A. City Council that City Hall restore 5,000 municipal jobs lost during the Great Recession.

“Our infrastructure is of great neglect,” said Bob Schoonover, President of SEIU Local 721, which boasts approximately 20,000 workers employed by the City of Los Angeles and is a major partner in the Fix L.A. Coalition. “Our streets are in need of repair. Sidewalks are crumbling. We see intersections full of trash and bulky items. We see the same neighborhoods left behind again and again. The Great Recession is over. Business is booming. One look around the skyline – we all see all the cranes, we all see all the building, it’s a boom in L.A. like I’ve never seen. The economy has recovered but the fortunes of many Angelenos have not. It doesn’t have to be this way and a big part of the solution is in your hands. It’s jobs, it’s services – it’s city services.”

City Hall cut 5,000 jobs from the municipal payroll when the Great Recession devastated city coffers. At the time, L.A. leaders promised not just the Coalition of City Unions but the people of Los Angeles that these jobs would be restored when the economy recovered.

Though Wall Street malfeasance was largely to blame for the big financial crash, City Hall turned to the municipal workforce to balance Los Angeles’ budget – even after the Fix L.A. Coalition exposed how City Hall was wasting hundreds of millions in taxpayer dollars on sweetheart deals with none other than Wall Street.

“We partnered with the city in the time of real crisis in 2008,” Schoonover said. “In fact, we partnered more than one time to be sure we could get through this. We accepted hiring freezes and all that stuff. But one thing is really different. We’re sitting here with a budget, the biggest we’ve ever had. With every upturn in the economy, we’ve hired people and we’ve restored services – and we’re not doing that. In the current budget, there’s approximately 3,600 vacant positions. We should be paving streets. We should be recovering.”

Schoonover noted that while the city planned to spend an extra $41 million on sidewalk repair – a perfect job for the Targeted Local Hire program – City Hall has yet to issue any directive to build back city crews. 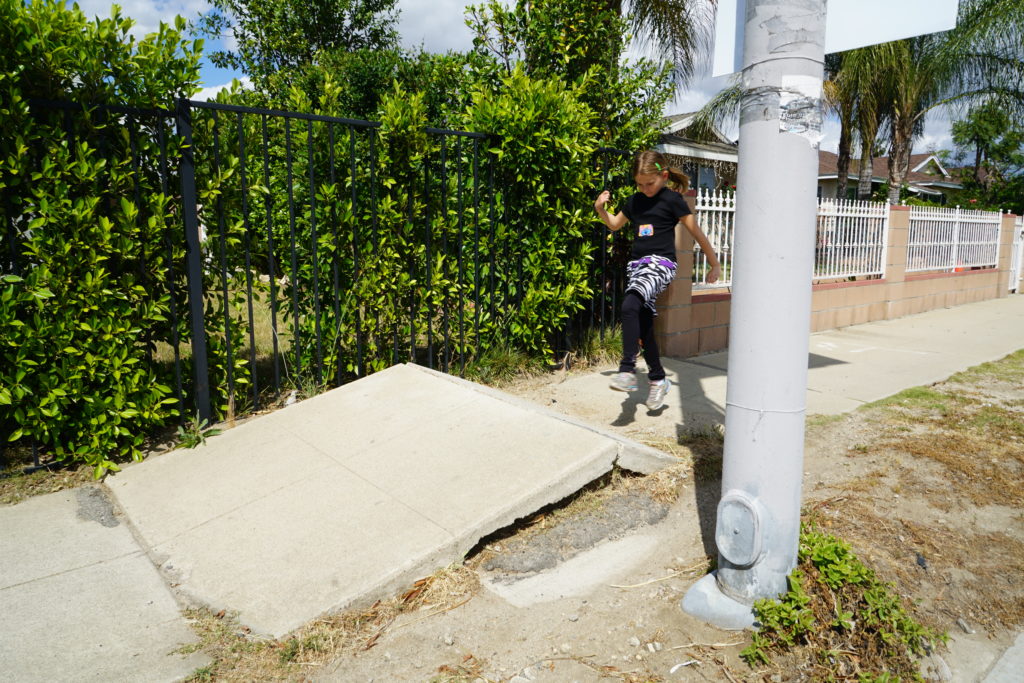 The proposed Fiscal Year 2018-19 Budget for the City of Los Angeles is $9.2 billion – the largest in municipal history. But not one penny is allocated toward the 5,000 job vacancies City Hall promised would be completely filled by their self-imposed deadline of this year.

“There was a job fair at the Black Worker Center for entry level jobs,” Schoonover said. “The line was unbelievably long. There are people that need these jobs, want these jobs. These jobs go right back into our economy. Most of these people actually live in the city. A lot of them spend their money here. It benefits the economy.”

Schoonover’s testimony took place before the entire LA City Council at their weekly Tuesday meeting due to his SEIU Local 721 Executive Board meeting obligations the following day. That commitment coincided with the city’s Committee on Budget and Finance meeting – where the remaining Fix L.A. Coalition partners made their demands. 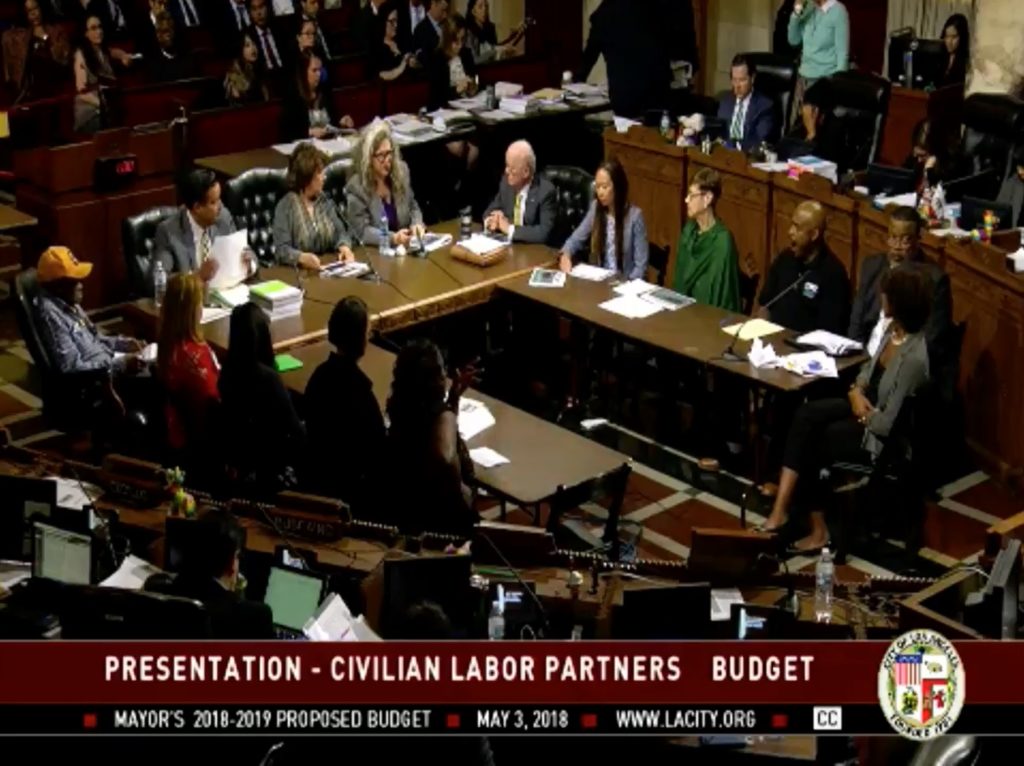 The Fix L.A. Coalition criticized how municipal finances are solidly back in the black but the City Administrative Officer has nevertheless instructed department heads not to fill any of the 3,676 projected job vacancies. Instead, he is recommending an additional $45 million in cuts even though the city’s Comprehensive Audit and Financial Statements show a consistent budget surplus in the hundreds of millions of dollars.

“The city’s actual cash flow has never had a deficit,” said Molly Rhodes, Ph.D., Research & Policy Analyst with SEIU Local 721 and a key member of the Fix L.A. Coalition. “We have to talk about structural deficits because we are balancing a book of projections for the incoming year. But what you see when you look at the comprehensive audit and financial statements for the city is that there hasn’t been a deficit.”

Rhodes emphasized City Hall’s disturbing pattern of contracting jobs out that should remain in-house and recommended that job vacancy numbers be reported in a much clearer fashion in future city budgets. 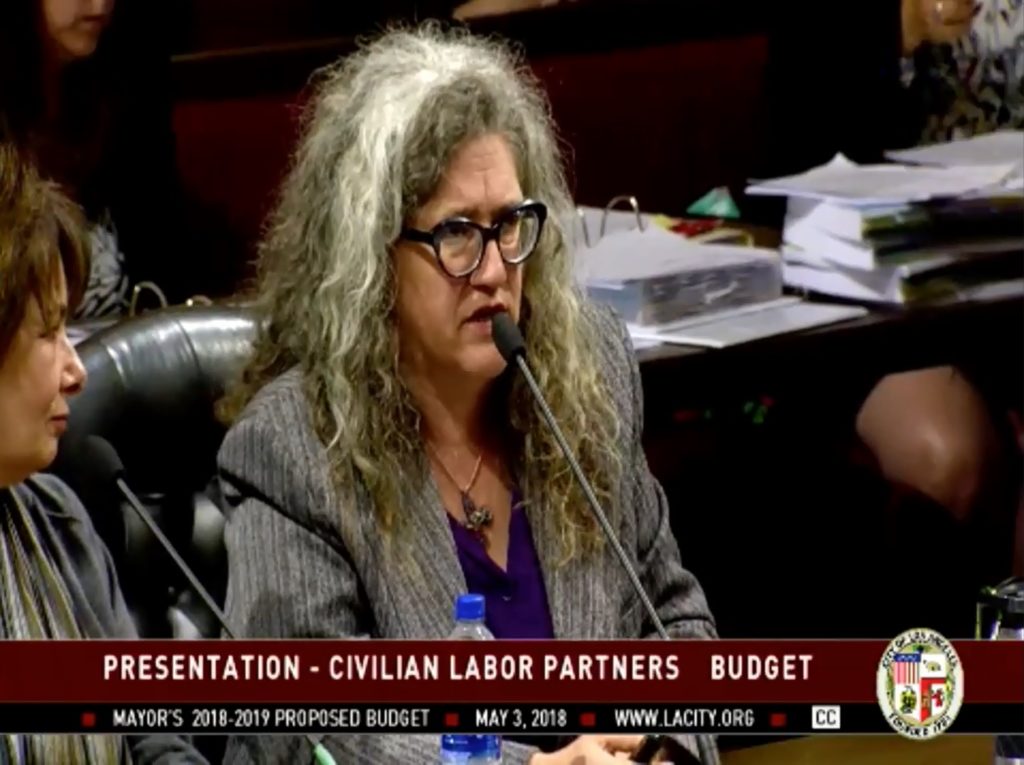 “We urge that future payroll improvement has to include position control,” Rhodes concluded. “The county does it. We should be able to do it as well.”