More than 150 union members and faith and community leaders gathered in the early morning hours at SEIU 721 headquarters over the weekend and embarked on a Humanitarian Aid trip to Tijuana, Mexico.

SEIU Local 721 took the lead in arranging the “Faith Caravan” as social workers, registered nurses, and other frontline healthcare professionals traveled to the U.S./Mexico border to deliver food, tents, backpacks, sleeping pads, food, diapers, toiletries, feminine products, clothes and other donations to the thousands of Central American asylum seekers who have been stranded there for weeks. 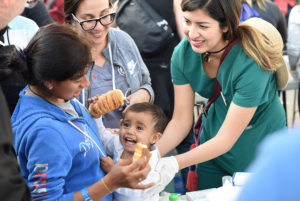 The donations were distributed to refugees at five different shelters and camps while nurses and healthcare professionals offered real-time medical care to migrants in a mobile clinic provided by SEIU United Healthcare Workers West.

LA County Registered Nurse Sandra Cruz attended the trip with her husband Antonio Cruz, who is a Medical Case Worker at LAC+USC. The couple, who are both children of immigrants, said they were honored to participate.

“This is simply the right thing to do – we both jumped at the chance to volunteer the minute we heard that SEIU 721 was putting this trip together,” Sandra Cruz said while waiting to board one of three buses leaving from Downtown LA. “I volunteered and helped families who were affected during the Woolsey fire and to me, this is no different. These families are in need and I’m proud that we are able to be there and show what America is truly about.”

Those on the Faith Caravan had to be flexible throughout several unexpected changes in plans and twice had to unload and reload the thousands of donated supplies that had the cargo areas of the buses filled to overflowing. In order for the group to cross the border, officials ordered the buses to be unloaded and all the donations taken through x-ray machines individually, only to be reloaded on the buses again once on the Mexico side of the border.

Susan Traniello Hines, a Psychiatric Nurse Practitioner with the LA County Department of Mental Health, was unfazed by the rigmarole and said challenges in the field are why public service workers are particularly qualified for such trips.

“That’s consistent with what we do – we take what we’ve been given, we adapt and we come through,” she said. “I think everybody did a great job and everybody just rose to the occasion.  I’m so glad that we did it and I think everything was from the heart.” 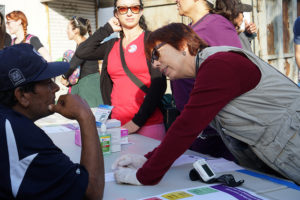 The Caravan’s first stop in Mexico was at the Primera Iglesia Bautista, a church in Tijuana that has a large congregation of Haitian immigrants, many of whom came out to help unload and distribute supplies for the immigrants from Central America.

The group then traveled for 45 minutes to get to El Barratel, which is the site of an old nightclub that has been transformed into a makeshift refugee camp. Hundreds of men, women and children are living at the camp, filled with colorful tents that provide the only means of shelter and privacy at the largely open-air facility.

Healthcare workers had expected to provide services to migrants inside the campgrounds, however upon arrival, officials would only allow them to enter for quick tours of the site. But the union workers also took those changes in stride, hastily setting up workstations outside the camp to perform medical care such as general checkups, treating wounds, checking blood pressure and glucose levels, and providing mental health and spiritual counseling.

Roxette Villegas, an RN at LAC+USC’s burn unit, spent some time talking with Hector, a young man from Honduras who was fleeing gang violence in his home country.

He joined the migrant caravan with hopes of winning asylum in the US and fears being harmed by gangs if he’s forced to return home.

Villegas said helping people like Hector and the thousands of others who are merely seeking better lives for themselves and their families are what compelled her to participate in the Faith Caravan.

“As a nurse I feel like it’s my responsibility to help and be of service,” she said. Villegas, herself a first-generation American, also spent time performing checkups on children and administering medications. “These people have been through so much and I can’t even imagine the struggles that some of them have had,” she said. “It just makes me even more aware of my own privilege and I’m truly honored to be able to help in some way.” 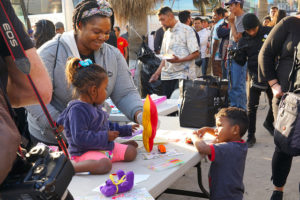