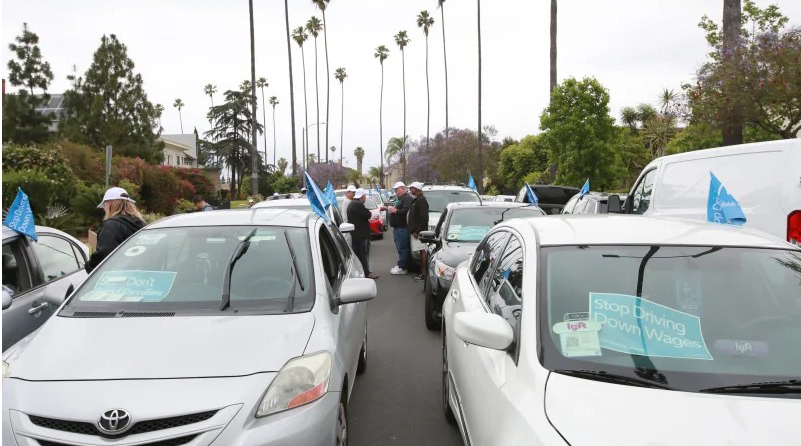 Hundreds rideshare employees driving for Uber and Lyft in the greater Los Angeles region took part in a massive all-day protest to raise awareness of the plight of Gig Economy and other low-wage workers – demanding a $30/hour living wager, a roll-back of Uber’s recent $25 rate cut and an end to arbitrary driver deactivations.

The mass action began in the morning with an Uber hub take-over in the West Adams neighborhood. Drivers descended onto the hub in a huge line of vehicles, all decorated with car flags and placards bearing the insignia of the Mobility Workers Alliance – the umbrella group started by SEIU 721 to organize rideshare workers. 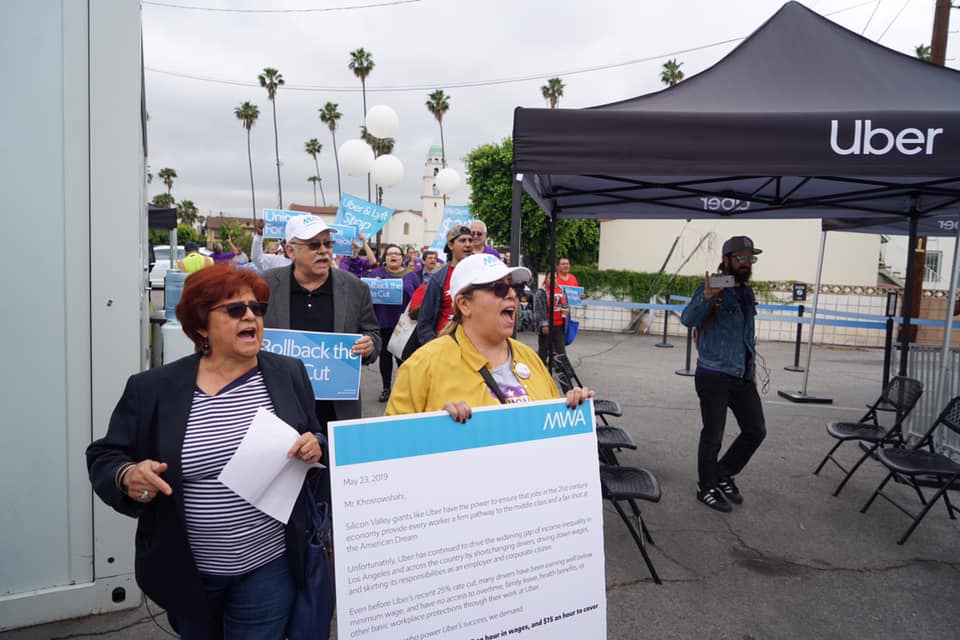 “Uber’s entire business would be impossible without drivers,” said Linda Valdivia, a rideshare driver. “We are the reason Uber and Lyft make millions. Yet the majority of Uber and Lyft drivers can work 50, 60, 70 hours a week and still earn less than minimum wage. This is wrong. it’s unjust. And it should be illegal.”

Since rideshare workers are classified as independent contractors rather than employees, they are on the hook to cover the cost of doing business. So Uber and Lyft drivers are demanding $30 per hour; $15 for livable wages and $15 to cover expenses associated with rideshare driving – such as insurance, gasoline, payroll taxes, workers’ compensation, healthcare costs and more. 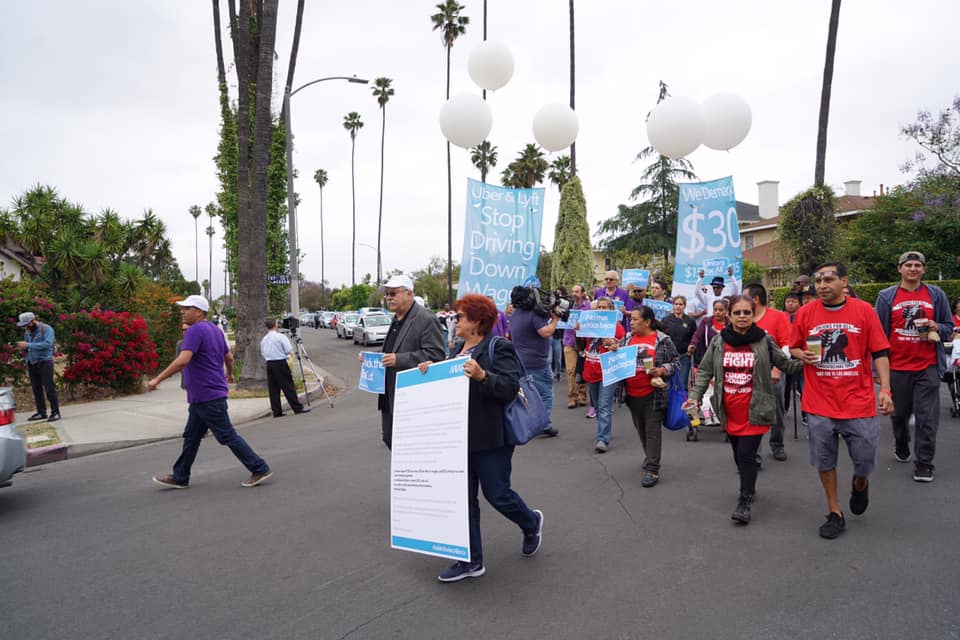 Rideshare drivers followed up their Uber take-over with a “motor march” to a McDonald’s restaurant in the Crenshaw District neighborhood nearby. They drove behind a large procession of fast food workers, child care providers, home care workers and janitors who were all part of the “Fight for $15” movement to raise the national minimum wage to at least $15/hour. 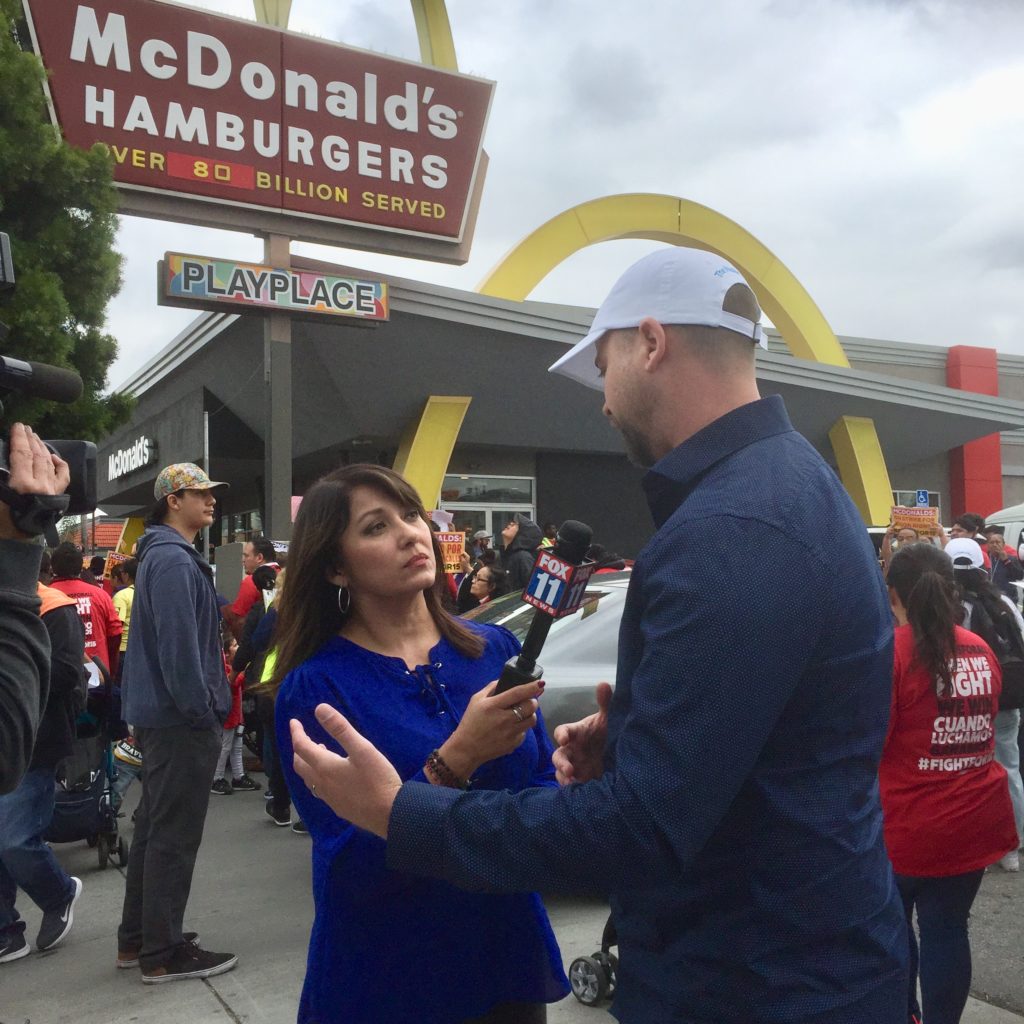 “[Uber] just went public, they’re a multi-billion dollar company,” said David Evans, a rideshare driver participating in the Mobile Workers’ Alliance demonstrations. “And you have riders that are making below minimum wage. We’re not asking for private jets to go to Bora Bora, just a salary that we can live on – whether it’s to raise a family, to go to school or to provide a better life for ourselves because, right now, the average driver makes between $6 to $9 an hour.”

Civic leaders throughout Los Angeles, and beyond, often point to the popularity of rideshare services like Uber and Lyft to demonstrate that the local economy has recovered and that economic security is within reach for anyone willing to work hard. But the direct experience of numerous gig economy workers contradicts this claim – compelling them to join fast food workers and others in the fight for a true living wage. 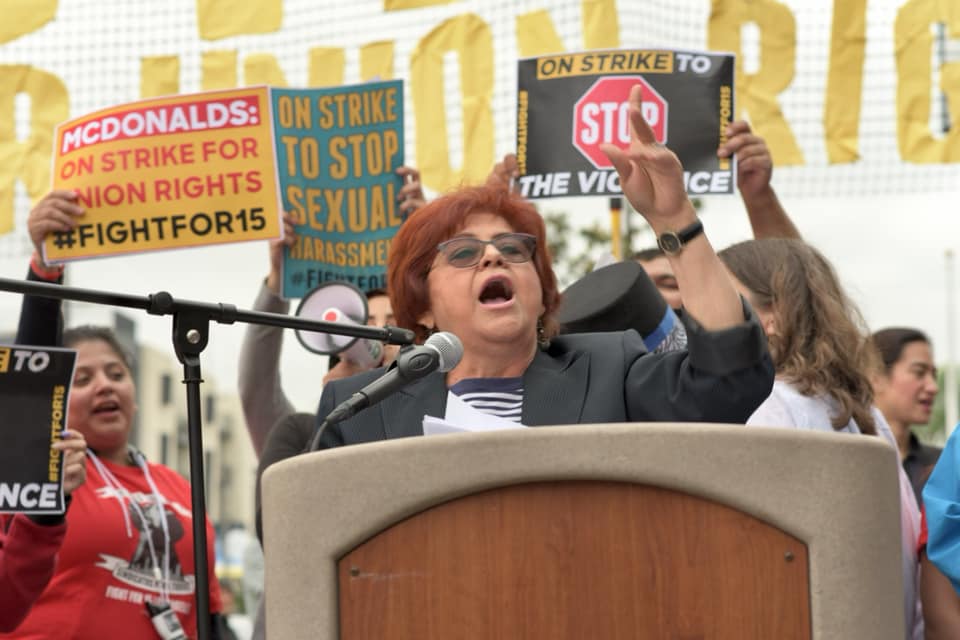 Uber and Lyft drivers consistently report working long hours for low pay, as they cover virtually all the costs of doing business with little to no power to change the terms of their job contract. Recently, for instance, Uber mandated a 25% rate cut – which Uber drivers had no choice but to accept given their contract worker status. Both Uber and Lyft also subject their employees to unfair “driver deactivations” – further impeding the ability of their own workforce to earn a livable wage.

“Rideshare workers throughout Los Angeles are ready to take the wheel and take control of their economic destiny,” said Bob Schoonover, President of SEIU California and SEIU 721, which is organizing the members of the Mobile Workers’ Alliance. “Uber and Lyft drivers know from direct experience what it’s like to take on all the costs of contract work but take home very few of the benefits they were promised. The fact that rideshare workers even need a $30/hour living wage, which is double what their “Fight for $15” counterparts are asking for, speaks volumes about the sheer amount of overhead costs that Uber and Lyft drivers are expected to bear – including fuel purchases, car maintenance and general wear-and-tear costs on their vehicle. But just like their counterparts, Uber and Lyft drivers understand that the only way for them to really move forward is through organizing and direct action.”