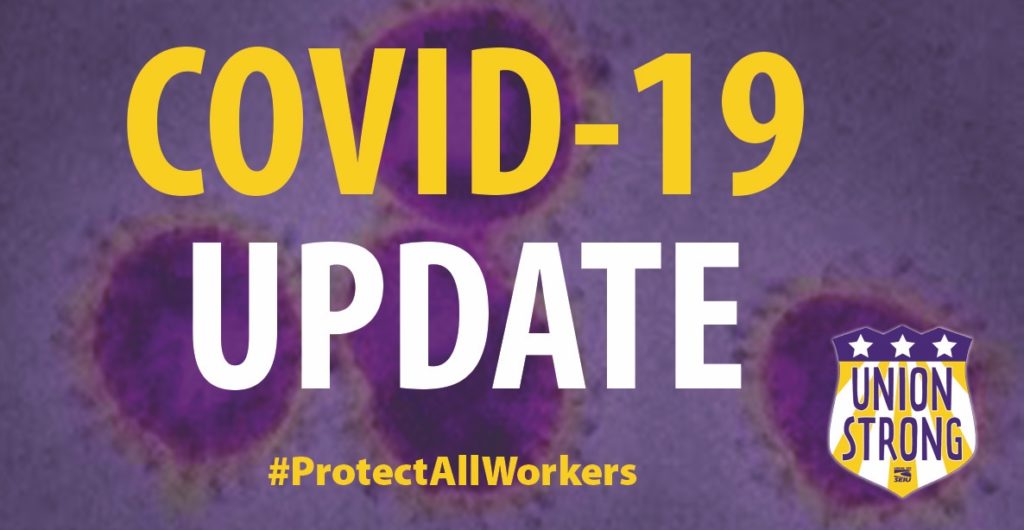 To close a projected $943 million shortfall in the 2020-21 budget, the County of Los Angeles has asked SEIU 721 and other LA County unions to agree to several pay concessions:

LA County is calling for these cuts as an alternative to layoffs. They contend that without the concessions, they will have no choice but to eliminate 3,720 positions – which would adversely impact as many as 6,000 employees through bumping, demotions and lay-offs. According to LA County’s budget documents, more than 1,300 employees could be subject to lay-offs.

While SEIU 721 members understand the looming budget crisis, now is not the time to take away from workers. SEIU 721 will not even consider postponement of negotiated raises at this time. We are asking LA County to first exhaust ALL other options – including fighting for possible federal funding to offset such devastating cuts on working families.

LA County representatives met with the union’s Bargaining Policy Committee (BPC) on Thursday, May 28 to present these proposals. A follow-up meeting is scheduled for next week, but only to discuss the proposed suspension of the 457 savings plan match. For now, SEIU 721 has taken the proposed postponement of raises off the table.

What about lay-offs and demotions? What can we do to prevent them?

We must join with working people around the country to get the federal government to provide financial relief to states and local governments. The House of Representatives in Congress recently passed the HEROES Act, a stimulus bill, which – in addition to providing a second round of $1,200 payments to workers – would also direct nearly $1 trillion to America’s states, cities, and counties. 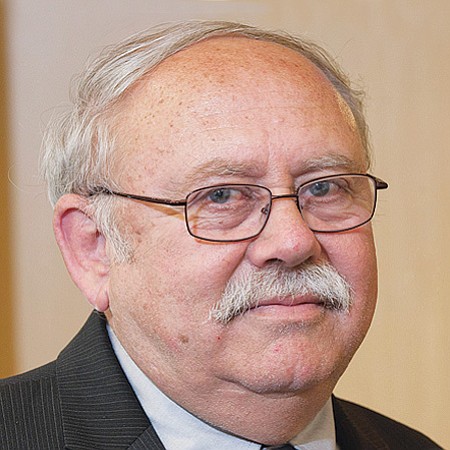 “We will not agree to postpone negotiated raises while there is legislation pending in Congress that could make such cuts unnecessary.” – Bob Schoonover, President SEIU 721

If the HEROES Act passes, it could resolve LA County’s budget crisis. The problem is getting it (or something like it) passed in the US Senate.

Our Senators in California – Dianne Feinstein and Kamala Harris – already support the HEROES Act. They’re not the problem. But in neighboring Arizona, Senator Martha McSally has not been supportive. She doesn’t care what we think here in California.

But she’s in a tough re-election campaign, so she does care about the voters of Arizona. We will contact union members in Arizona and connect our brothers and sisters to Senator McSally’s office so that they – the voters of Arizona – can deliver the message: “Don’t Bankrupt America’s Front Line!”

Join the fight to stop demotions and lay-offs. Text “VOICES” to 31996 so you can join our team of Digital Union Voices.

Then prepare to receive instructions and take action. Don’t let them call us “heroes” today only to put us on the unemployment rolls tomorrow. Mobilize to fight for the HEROES Act – because when we fight, we win!

THANK YOU UNION FOR NOT AGREEING TO ALLOW COUNTY TO POSTPONE NEGOTIATED PAY RAISES!!!! ALLOW DEPARTMENTS TO PROPOSE PLANS FOR BUDGET CUTS. ENCOURAGE MEMBERS WITH OVER 30 YEARS TO RETIRE!! REQUEST MEMBERS WHO ARE NOT FINANCIALLY STRAINED TO VOLUNTEER TO ALTERNATE FURLOUGH DAYS. THERE’S SO MANY PENDING PROPOSALS THAT CAN BE TAKEN BEFORE WE ALLOW THEM TO POCKET OUR HARD EARNED DOLLARS!! COUNTY PRESSURES FRONTLINERS TO WORK DISASTER RELIEF EXTRA HOURS A WEEK AND ABANDON OUR FAMILIES!! AND NOW COUNTY WANTS TO CUT MY 2.5% = $1 DOLLAR RAISE THAT I EARNED???!?! THERE’S NO PROMISES THAT THEY WONT SAY “OOPSS… Read more »

The last time they “delayed” negotiated raises… they did not increase salary for 7 years while cost of living in LA County shot through the roof. This set of raises, the set they are trying to freeze, still had inequities adjustments stemming from that time frame.

I do understand people have lost their jobs, got reduced hours and there is suffering. THAT IS WHY WE ARE FRONT LINE COUNTY EMPLOYEES ABANDONING OUR FAMILIES WORKING EXTRA HOURS TO SERVE AND PROVIDE RESOURCES TO THE VAST AMOUNT OF THE COMMUNITY MEMBERS: WHO ARE JOBLESS, FURLOUGHED AND SUFFERING!! I CAN READ AND UNDERSTAND VERY WELL. YOU ARE NOT A COUNTY EMPLOYEE THEREFORE YOUR OPINION IS EXEMPTED. We have worked TIRELESSLY to argue to wage increases. THE MESSAGE IS TO ADMINISTRATION! HIGHEST PAID WHILE, SAFER AT HOME…WHY AND HOW IS IT FAIR THAT THEY CAN KEEP THEIR SALARIES AND PROPOSE… Read more »

AMEN!!! I am willing to take one furloughed day per pay check for the next fiscal year or 2 and have no raise if it means we all keep our jobs. We must look at the big picture. County should look at all the employees that they are paying tens of thousands to sit and do nothing all day but socialize and complain.

Oh, we’re suffering; don’t worry about that part. It’s public service. A good number of people have chosen to forgo higher salaries and modern work environments to work in the most grey, depressing, dilapidated buildings you have ever (or never) seen, in order to try and do right for the public.

You think your services are bad now? If the 10% that actually cared about this ethos decided to leave for/return to the private sector, you (and the rest of LA County) would fear the results.

We have been on the Frontline from day one. How dare the county to suggest to postpone our hard-earned raises and suspend our retirement savings. I suggest that those in the CEO and management positions should take the cut since there’s so eager to give the working poor a cut. This is not only foolish but sad to see. We’re just pawns that are easily dispensable. It’s time for the county and its management team to recognize not only the solidarity of the county employees but also that we are essential and that we matter as well. let’s fight to… Read more »

Do not accept the deal. We need the raises. Most departments just hired a lot of workers. Lay off newer employees. Keep the frontlines going. We need raises. Do not accept the deal or the county will not stop asking for more. Cut hours where it can be cut. Hospital administrators and directors makes 200k + sitting in there offices writing emails about nothing sipping Starbucks. Make the cuts at the top. I cant be sent home from the hospital dealing with patients. I’m working everyday and very grateful.

Look at the streets of LA county right now. The county needs to unite us and give the raises we deserve. Stock market real estate rent gas Bill’s everything is still high. HOSPITAL WORKERS will unite for our raises !!!

They can lay off brand new employees that havent passed there 6 month probation. This will be a ploy to not give us raises just like they did from 2008 to 2014. Horizons would be the most we can do suspend the match for 6 months . We need the raises. Too many employees of LA county are not needed working from home doing nothing half of departments are closed and service of people are still getting done. County supervisors will never take a pay cut !

Stop asking the government for handouts LA county. Things can be fixed from within without delaying our raises. How many more homeless will this make in LA county. Garcetti and Newson have nice mansions but most of us will be in our cars or under a bridge ! Let’s unite for our raises.

Exposed to covid-19 daily just to get a pay cut. Don’t forget about the increases to the pension contributions!

I agree this is crazy. We are getting exposed everyday . All the people at the top 200k + a year doing nothing. I dont need 10 managers making 150k + while I have to see a patients with covid-19 and cant even make half that

Ahh, fellow Healthcare worker. I totally agree. I think I would rather take the furlough days than the pay cuts. At least it won’t mean our time is less valuable. Finally some time off would be nice. In the end, they probabally will push for salary cuts.. Because of how understaffed we are they cannot afford having people off on furlough, especially with the backlog of work!

Thank you so much front line staff workers. You get a pay cut !!!! Everyone is at home getting 600 extra a week on unemployment while we still have to work everyday !!! Black lives matter

Firing new employees in the middle of a pandemic is not logical. Seasoned veterans at the county sometimes do not work at all, come late, fail to oblige to their duties and sometimes do not work at all. There needs to be seasoned change from top to bottom. No employee should be laid off as some offices have severe shortages. There needs to be change and change immediately. Keep good employees only – new or seasoned.

As a county employee, you should be aware of the difficulties management faces when they have a difficult or under-performing employee. You can’t just fire a “bad” employee – that’s where the SEIU comes in. You have to be willing to take the good with the bad if you want the union.