The County of Los Angeles and SEIU 721 reached an agreement Friday morning on a proposal aimed at averting layoffs and demotions. The Union rejected the County’s demands for postponement of negotiated raises as premature and unnecessary at this time. In order to avert thousands of proposed layoffs and demotions, the Union agreed to a temporary suspension of the County’s matching contribution to the 457 Horizons deferred compensation plan, but with conditions to protect SEIU 721 members. 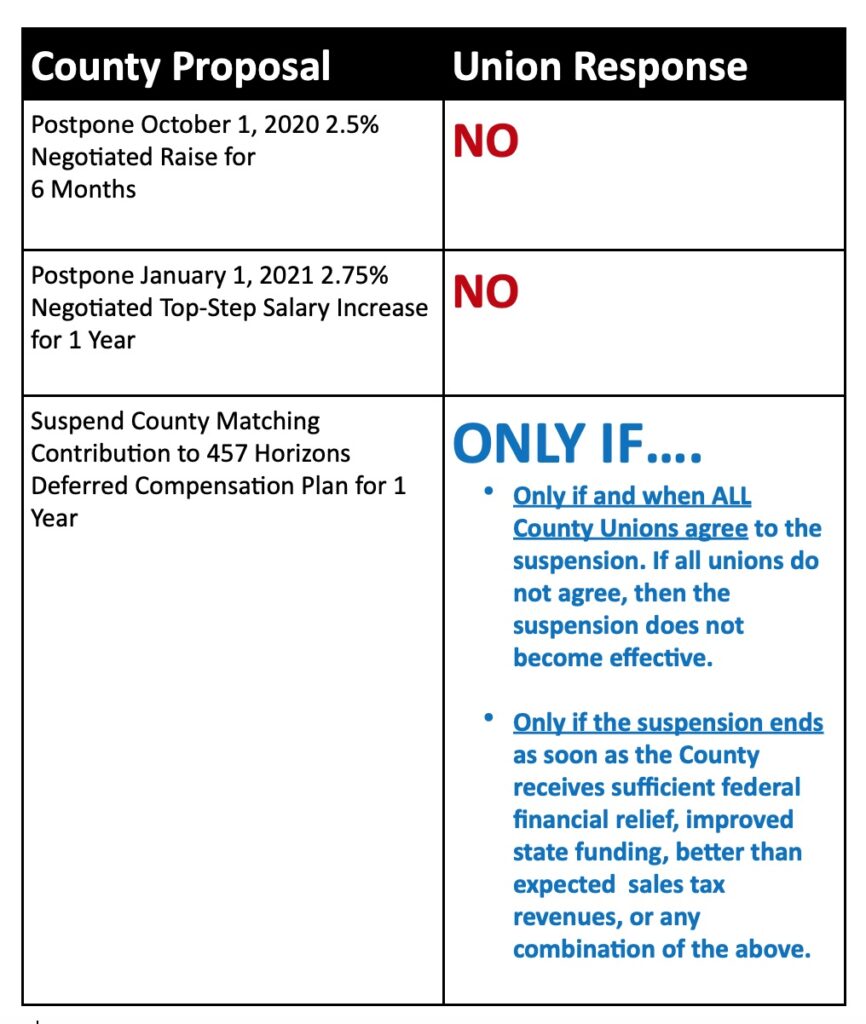 Q:       Why did SEIU 721 agree to a temporary suspension of the County’s matching contribution to the 457 Horizons deferred compensation plan?

A:        The County’s budget crisis is real. Due to the COVID-19 Emergency and the steep decline in sales tax revenues, the County is facing a nearly $1 billion shortfall in the 2020-21 budget. They have already drawn down reserves and “rainy day funds” to dangerously low levels. City employees and state employees are facing 10% furlough and pay cut proposals. The County has already imposed on non-represented Megaflex employees (mostly managers) a suspension of the 457 match, as well as a suspension to their 401K match.

Your elected bargaining committee members believe that – in order to avert layoffs – a temporary suspension of the 457 match, with built-in protections for SEIU 721 members, is the least impactful sacrifice that employees can make. It doesn’t affect take-home pay.

Q:       What if other County union do not agree to the suspension?

A:        If other County unions do not agree, then the suspension will not apply to SEIU 721 members either.

Q:       Will this agreement stop the layoffs and demotions?

A:        The County’s position is that the suspension of the 457 match will reduce the number of layoffs, but in order to prevent all layoffs the unions would need to agree to also postpone the October 2020 and January 2021 negotiated raises.

But SEIU 721 believes that – with the sacrifice we are making –  we will be able to stop all layoffs. The layoffs would not take effect until October 1, 2020. In the meantime, we will continue to fight for financial relief from the federal government (legislation is pending in Congress). And we will fight to make sure that the County cuts all fat in the budget rather than laying off anyone. Chop from the Top!

Have the top take pay cuts in their salary rather than taking raises promised to workers who have gone for so long without them.

If worst comes to worst, and in order to avoid ANY layoffs, is there any way we can negotiate for a specific amount of furlough days instead? I know SEIU Local 1000 were negotiating for State workers to have a “2 personal leave days program.” Basically, 2 days out of the month, the employee would choose which 2 days they would take off with no pay. This would be for 12 months..a total of 24 days not paid. This would allow every employee to avoid the scare of a layoff and if anything, 2 days without getting paid monthly, for… Read more »

Why can’t we agree to push the raises back? If that’s going to prevent lay-off. I say let’s do it.

Historically, LA County has never done furlough days, and with good reason – why lose man hours when you could simply demote people and force them to continue working in the same capacity for far less pay? If LA County workers face layoffs + cascades again, it would be damning and put off talented workers from returning, or ever joining the county workforce in the first place. If you aren’t familiar, talk to someone who was working for LA County in the 90’s – cascades are far worse than anything LA City is doing. They mention “layoffs and demotions” for… Read more »

Greetings, I personally don’t agree with the proposal of postponing of October and January raise and most importantly the suspension of 457 contribution. Enough is enough, we need to fight with County’s nonsense proposals. They are using and abusing us the hard working employees. Not to mention, some County jobs are not necessary and I don’t know how it was created. I personally have witnessed some titles are created for no use because workers don’t do anything, they just sit and get paid. If District Supervisors are so worried about employees, let them take a Pay Cut first. We all… Read more »

Furloughs in this instance is discriminatory against the county/city workers. By taking a single day a pay period, essentially 1 month off, we are not able to recoup our losses. The entire US is able to receive compensation from EDD or other resources. Los Angeles, California and the US Federal Government are offering stimulus help but LA employees will not be able to apply for help for our loss. This situation is not the same as other budgetary issues. The state, city and government didn’t give money to all citizens or residents for previous budgetary issues the “furlough” is directly… Read more »

Shouldn’t there be some defined number re: “…ending the suspension when the county receives … sufficient relief” ?

I want to know if LA County is struggling why is my department hiring? There’s an add for an HSA III and my office just hired 54 new people. There’s no budget crisis. They’re bluffing. Our contract is not up! We deserve better! I’m calling BS on LA County’s lies! Don’t renegotiate!

This is the most selfish comment. Utterly disgusting to read.