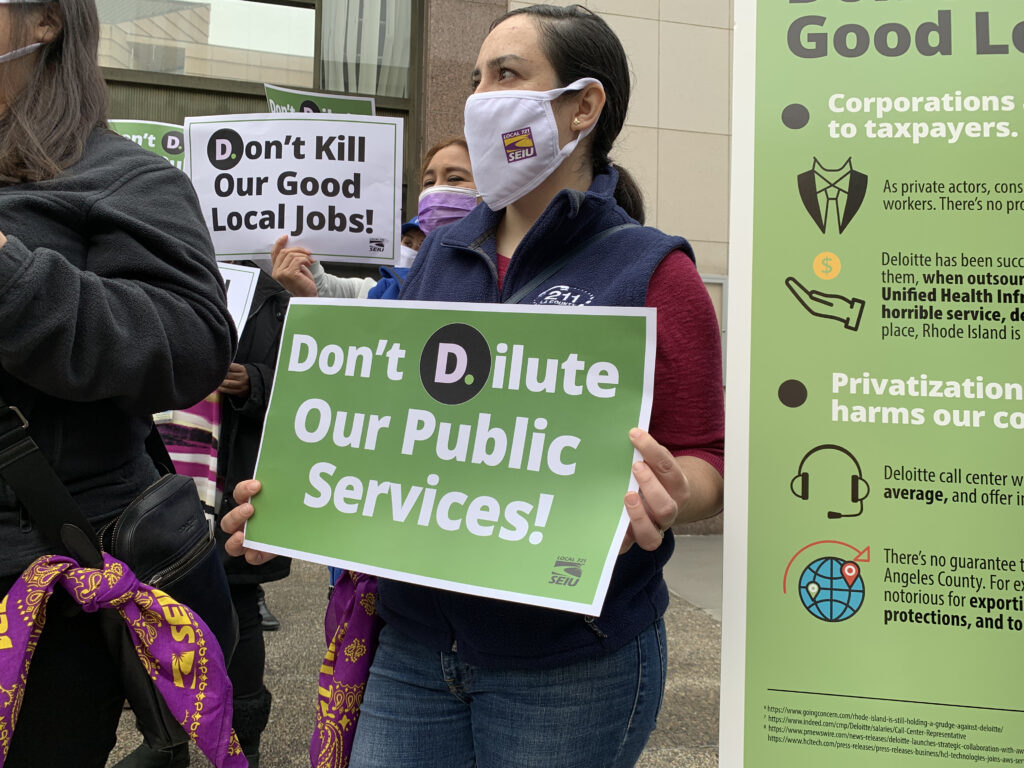 SEIU 721 members and representatives of social service providers rallied Tuesday outside the LA County Board of Supervisors meeting and spoke out against plans to shift 2-1-1 hotline services from 211 LA, a trusted local nonprofit, to a giant for-profit corporation.

At the action and press conference, 211 LA workers held signs that said, “Don’t Kill Our Good Local Jobs,” and “Don’t Dilute Our Public Services” — and spoke about the importance of 211 LA’s work.

For 40 years, 211 LA has operated a 24-hour 2-1-1 helpline that connects individuals and families in LA County with essential services and resources — such as housing assistance, food benefits, emergency disaster response, and safety information, including guidance about the COVID-19 pandemic.

Yet county leaders have moved to end 211 LA’s longtime contract. In October, 211 LA was notified that it is the runner-up in the county’s latest request for proposals for an organization to run the 2-1-1 service, meaning that the nonprofit may cease operation as soon as March 2022.

“This move by LA County — to outsource good union jobs and quality public services to the lowest bidder — is unconscionable, and sets a dangerous precedent that threatens to gut critical safety net services for the most vulnerable in our communities,” said Gilda Valdez, chief of staff of SEIU 721.

Valdez added: “We’re here today to call on the County CEO and the Board of Supervisors to immediately stop the for-profit privatization of 2-1-1 and retain 211 LA as the sole source provider.”

The trained support providers of 211 LA are highly skilled and have deep institutional knowledge of L.A. County’s available services. The majority of the nonprofit’s workers, who now face the prospect of layoffs in the coming months, are women and people of color — many of whom have previously relied on the services 211 LA connects people with.

“We’ve established ourselves as a vital agency for Los Angeles County,” said Carolyn Stubblefield, who has worked at 211 LA for 36 years. “Over the last five years, 211 LA has provided millions of referrals for housing, food, mental health, and legal services.”

Stubblefield added: “What makes 211 LA so special is that we have workers who have real-life experiences. We have people working at 211 LA who have been homeless, who are survivors of domestic violence, who have been food insecure, who have health issues, including those who have dealt with cancer. We are trusted agency.”