Thousands of union members and labor supporters descended on downtown Los Angeles for the “Fight for the Frontline” march and rally today to highlight how contracts for LA County members expire at midnight tonight – and to emphasize how, if necessary, LA County members are ready to strike. 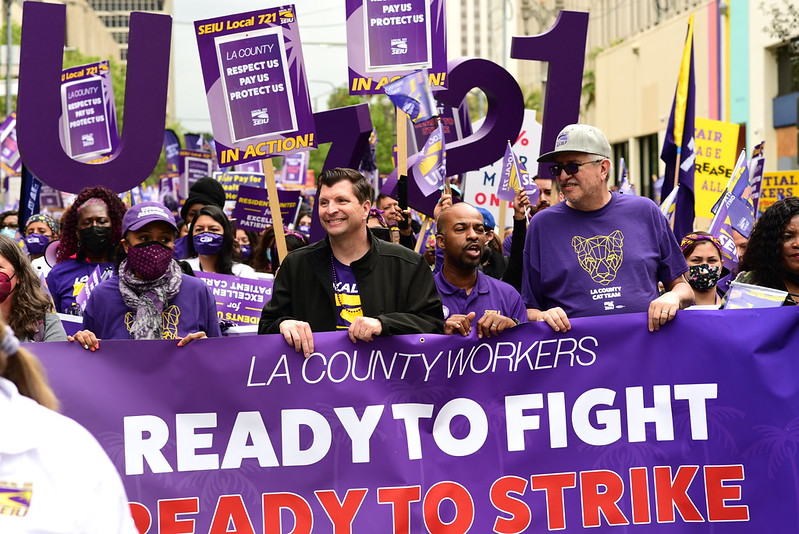 Participants met up near at Grand Park directly outside City Hall and packed Spring Street for a massive rally, where speakers fired up the crowd as an airplane circled overhead with the words: “LA COUNTY: RESPECT US! PAY US! PROTECT US!” 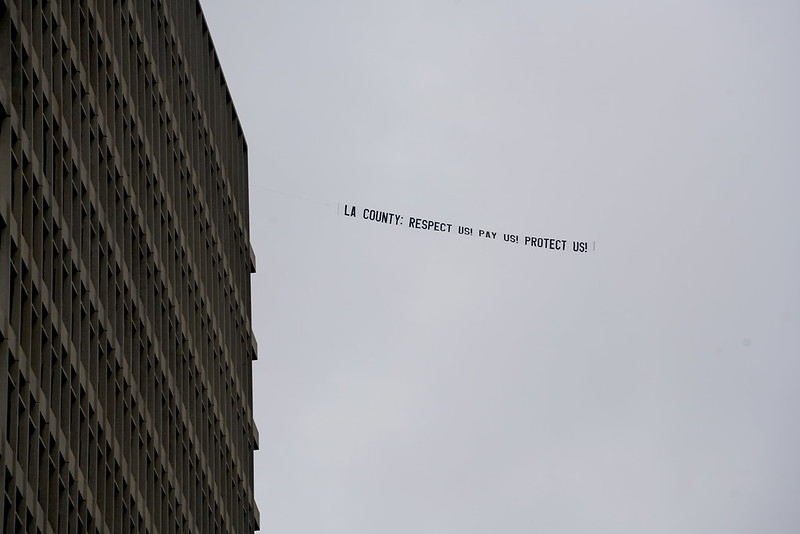 “This is shaping up to be one of the biggest contract fights in LA County history,” said David Green, President of SEIU 721. “We don’t want to strike, but if we have to, we will!” 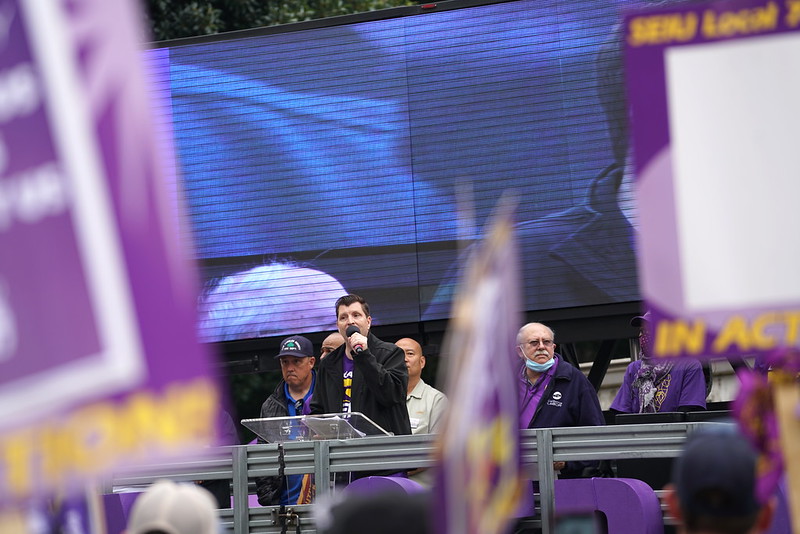 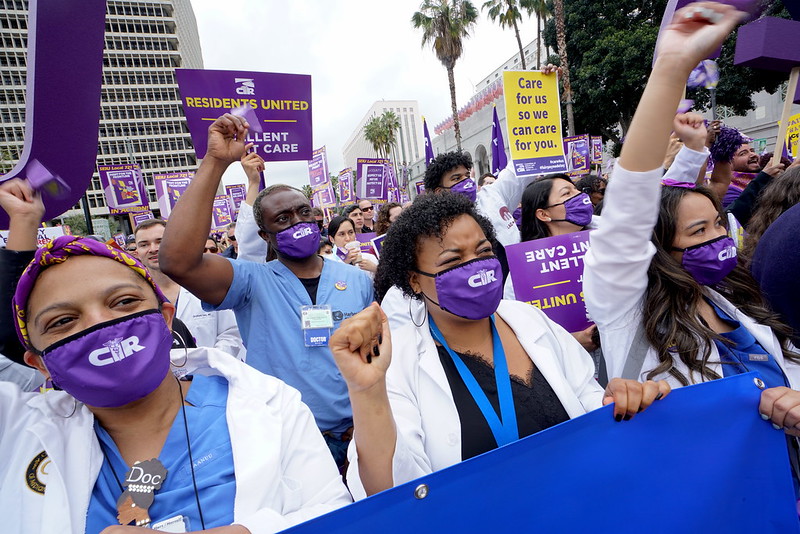 Also present: SEIU 721 members from the City of Los Angeles as well as union members from AFSCME 685 and the United Farm Workers, whose co-founder Cesar Chavez would have been 87 years old today. 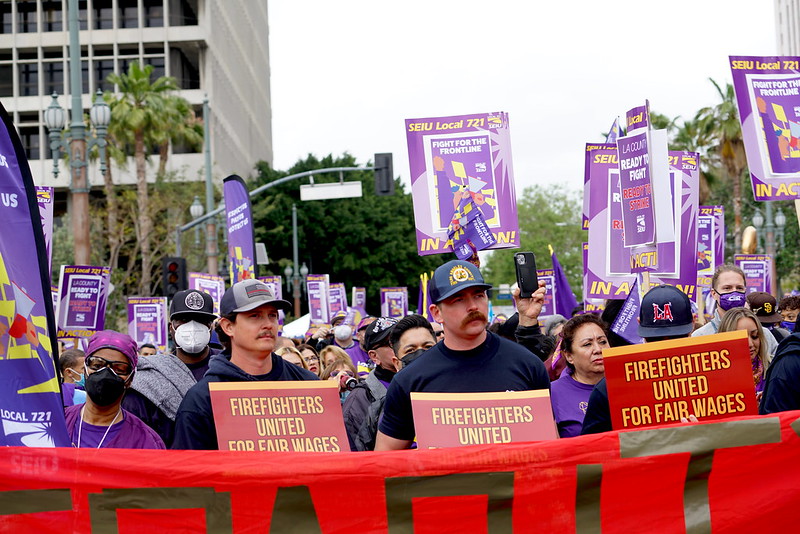 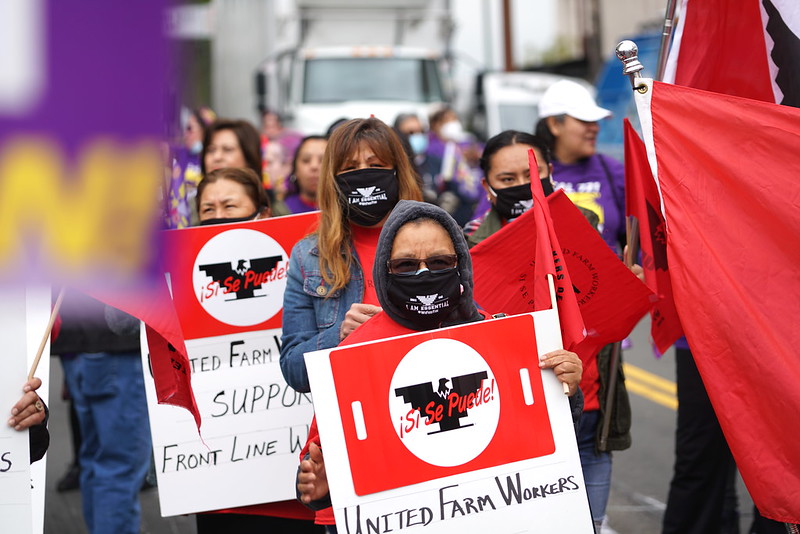 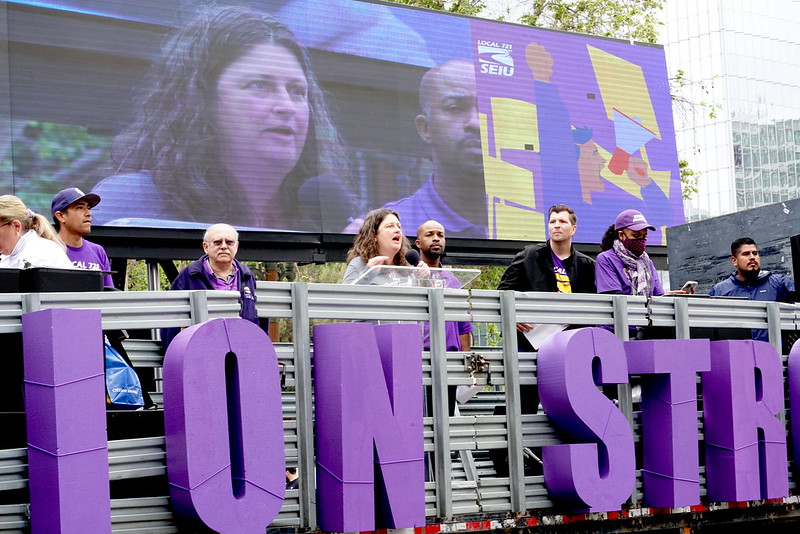 The Fight for the Frontline march and rally marked the start of a countdown to a County-wide strike vote over four main issues: 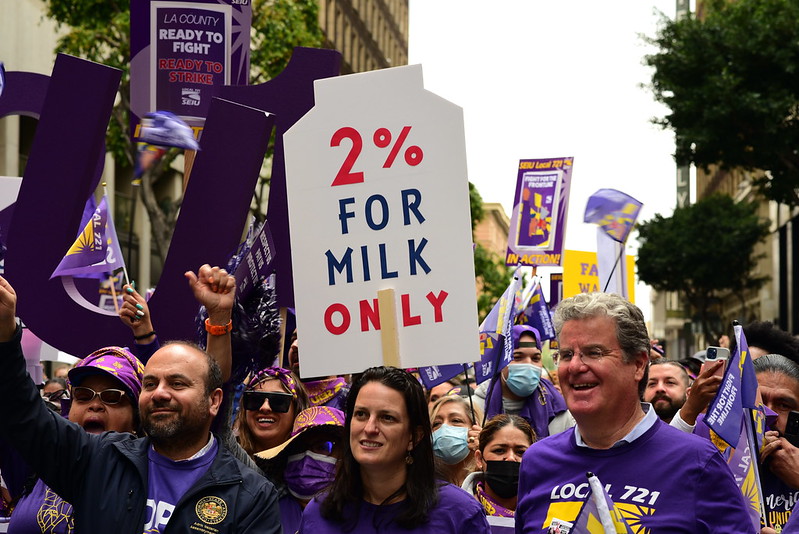 “I have a very special message for all of you: We have your back,” said Simboa Wright, SEIU 721 Vice President and a City of Los Angeles employee. “Today we will make it perfectly clear. You cannot call us “heroes” one day and try to contract out our jobs to corporations the next day.” 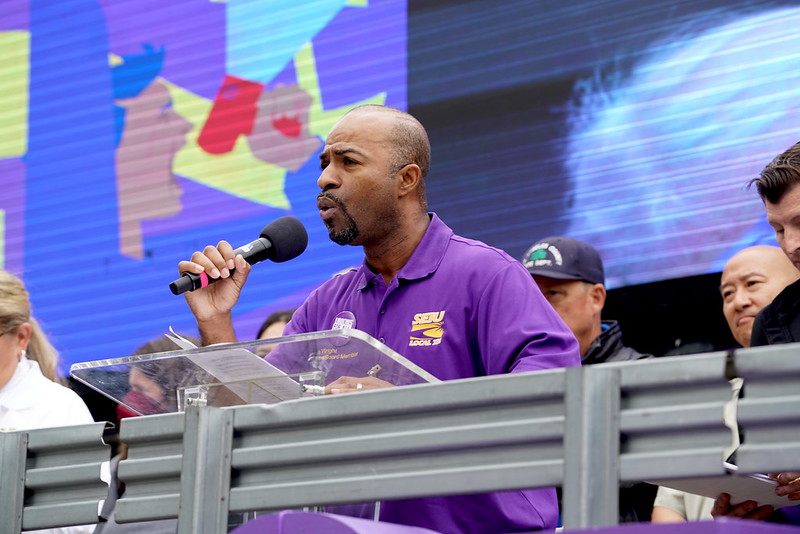 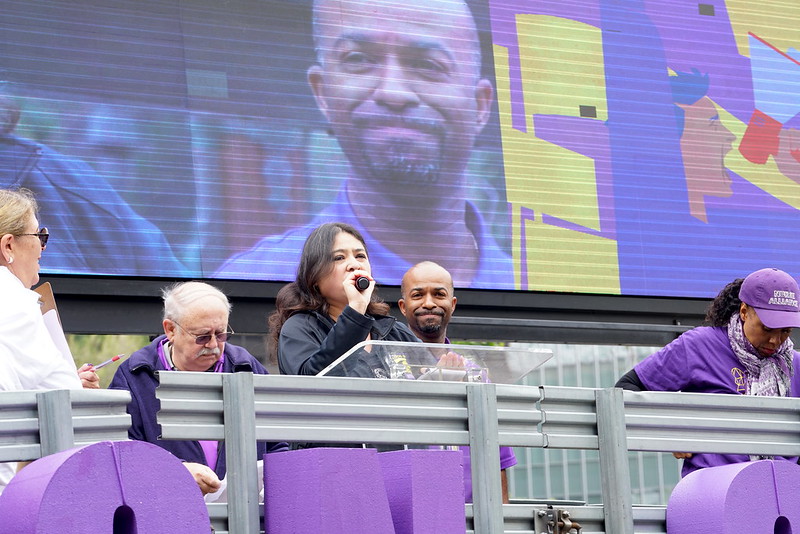 “We have different contracts, but Court workers and LA County workers are in similar boats,” Nava said. “We are both fighting stingy managers and leaders who don’t want to honor our contributions! Neither the county nor the Courts want to provide workers good benefits or adequate conditions. And neither want to pay their workers fairly to keep up with inflation or the LA area’s cost of living. I’m here today to say: We workers deserve better!” 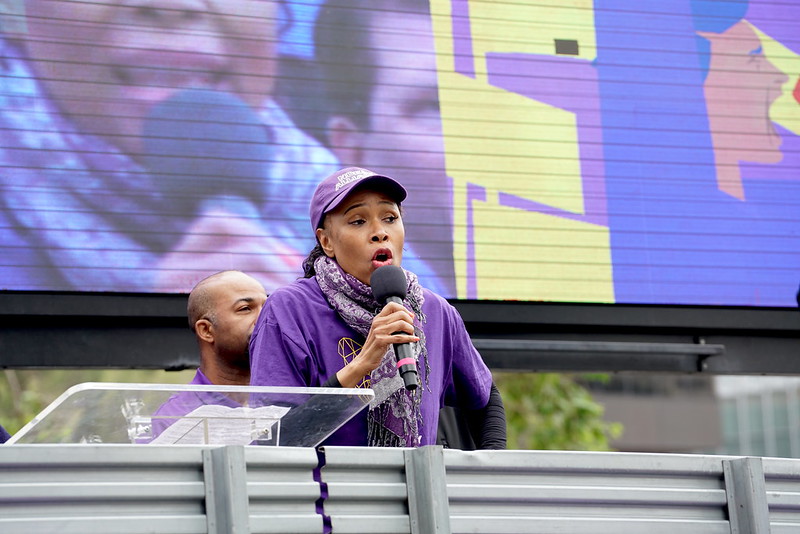 Dr. Ileana Meza, Chair of the Bargaining Policy Committee, led a brief moment of silence during the rally in honor of the people of LA County who perished during the COVID-19 pandemic. Afterward, she described how, “I have been on the frontlines as the coronavirus pandemic devastated communities across the LA area. For many of my patients, the experience was traumatizing and isolating.”

“I’ve been at the bargaining sessions and the latest offer … it was a slap in the face!” Dr. Meza said. 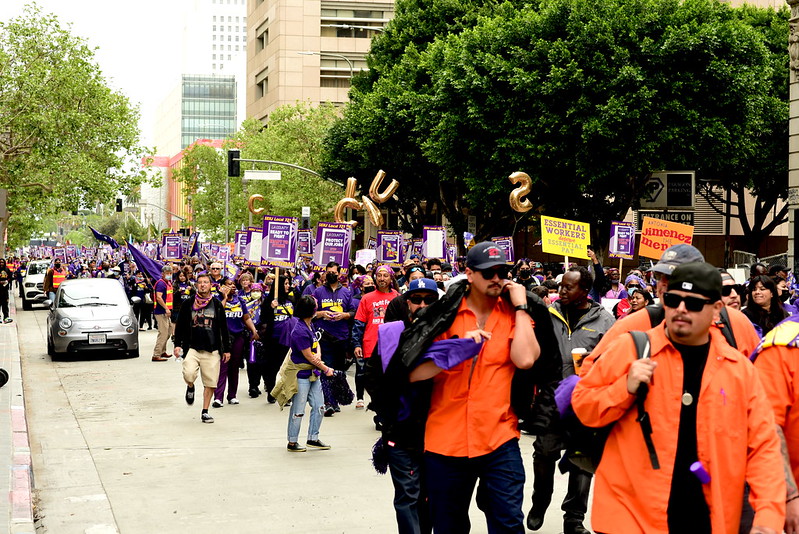 It was a startling reminder to all participants at the “Fight for the Frontline” that a new contract was on the line as the rally portion of the program ended and the march itself began. Thousands of people marched south on Spring Street, then headed west on Fifth Street, turned north on Grand Avenue and finally headed east on Temple Street to return to City Hall. 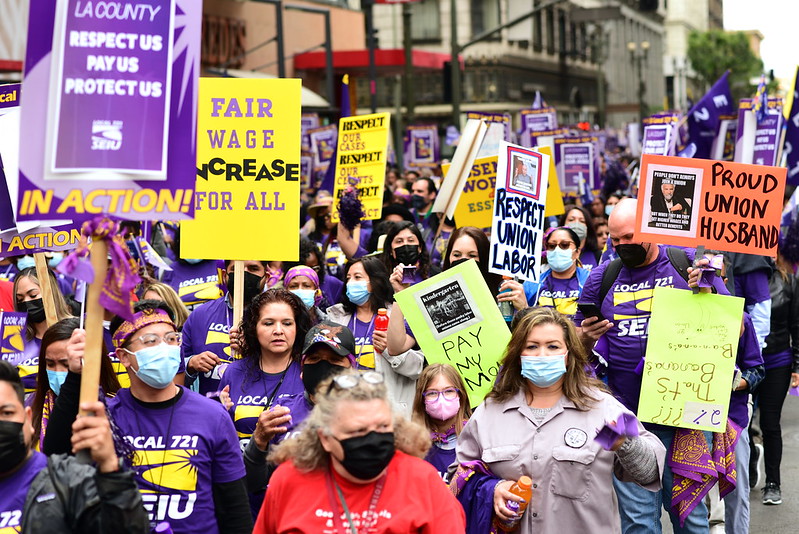 The two-mile loop was lively and loud with plenty of looky-loos as lunchtime hits its peak. Office workers and residents inside buildings along the route could be seen waving in support – and some even posted on social media with words, images, videos and stories of encouragement. 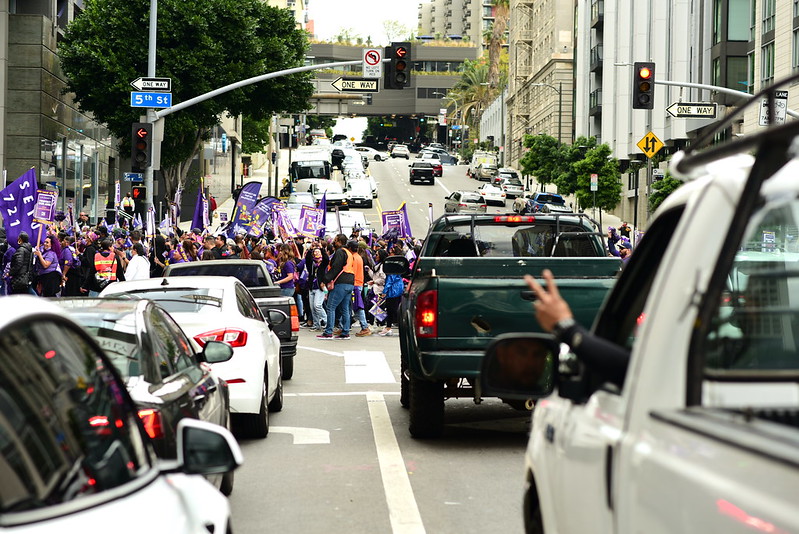 The crowd of thousands of union strong marchers could be heard even before it could be seen, as their chants reverberated against downtown LA’s skyscrapers. 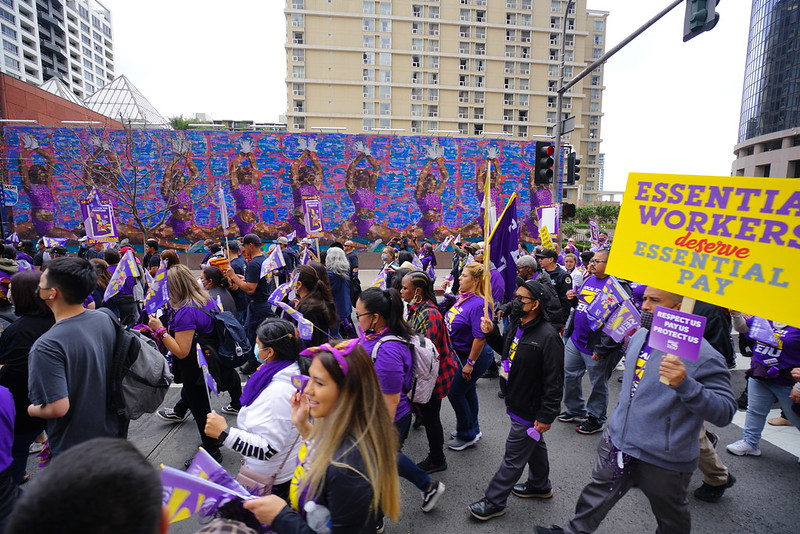 Many expressed an eagerness to fight against privatization, particularly at the Department of Public Social Services, while many others echoed the “Ready to Strike” sentiments of SEIU 721 Executive Director Bob Schoonover. 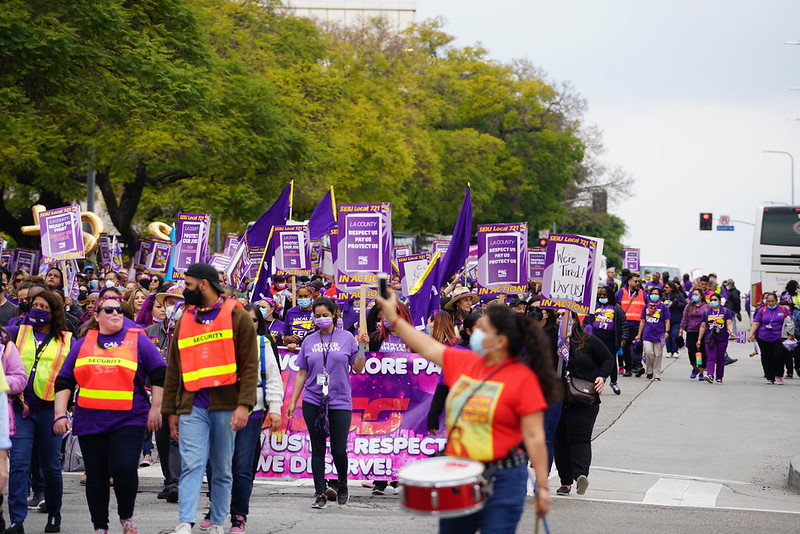 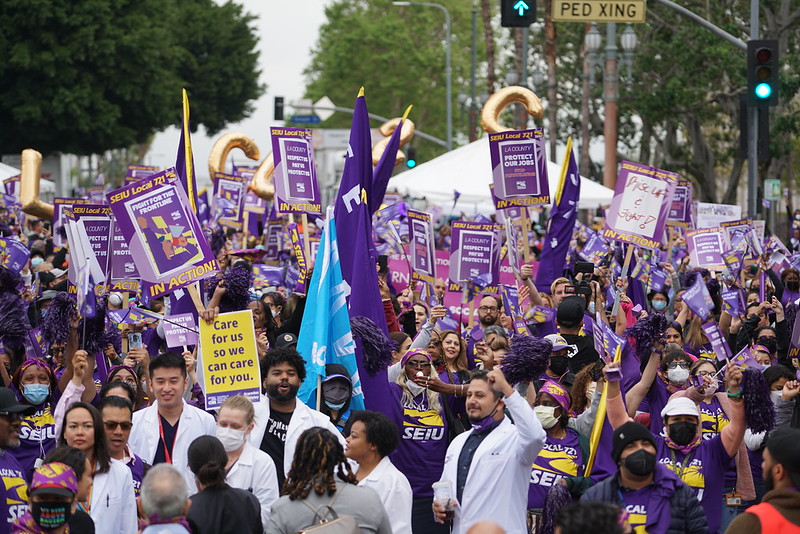 “We’re here to let the county know that we are not afraid to strike for what we deserve!” Schoonover said. “LA County workers will continue to fight for what’s fair and what’s right. And when we fight, we win!” 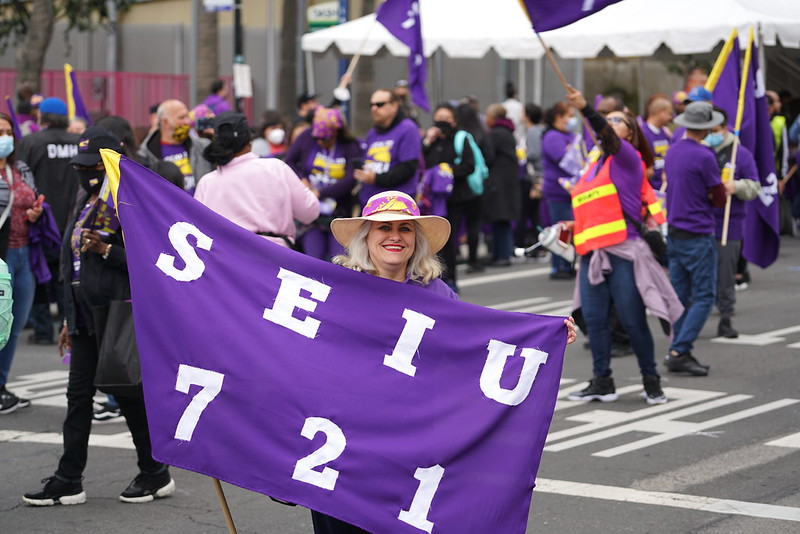 To view more photos from the “Fight for the Frontline” march and rally, click here!