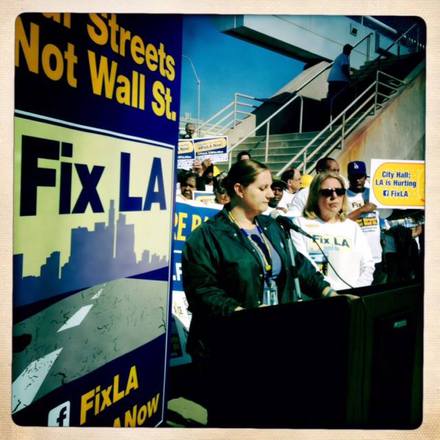 LA City workers–backed by clergy, residents and organizations in the Fix LA coalition–took action at more than 70 work sites from Playa Del Rey to the San Gabriel Valley and from the San Fernando Valley to LAX and the Port of Los Angeles in order to expose the health, safety and quality of life impacts facing Los Angeles and demand that City Hall end an era of pain and drastic cuts to vital jobs and city services.

To see what actions your fellow workers took on Tuesday, check out Fix LA on Facebook and Twitter.

City of LA job cuts–more than 5,000 positions held primarily by people of color have been wiped out since Wall Street crashed the economy in 2008–have had a severe impact on the city’s communities and working families. For example, the city’s 39,000 catch basins, which filter storm water before it travels to LA’s rivers and beaches, require 80 workers to maintain–but the city only has 24, less than a third of the number required to keep toxic trash from polluting our waterways. In addition, the number of city mechanics has dropped by 20%, resulting in deferred maintenance to LA’s aging fleet, frequent equipment breakdowns that keep trash trucks off the street, and a potential safety hazard to the public.

“My co-workers and I are doing everything possible to keep the public safe, but we need elected officials to stand up to the big Wall Street banks and commit to reinvesting services and protecting residents,” said Stacee Karnya, a chemist at the Hyperion treatment plant, where raw sewage is processed before the water is released to the ocean. “Without adequate workforce or functioning equipment to get the job done, LA neighborhoods and beaches remain at risk.”

Karnya joined several dozen workers who poured out of their laboratories during their lunch breaks to march across a skybridge to Dockweiler Beach, drop two banners, and stage a speakout with environmental advocates, coastal residents, and Westside community organizations.

Fix LA has uncovered that Wall Street banks charge LA taxpayers nearly $300 million in transaction fees alone, but to date City Hall has failed to renegotiate these payments to bring money back to Los Angeles and restore city services.

The citywide actions kicked off at 6:30 am when sanitation workers from the South LA yard were joined by clergy, community leaders and Councilmember Jose Huizar to call out the city’s aging fleet. The number of city mechanics has dropped by 20%, resulting in deferred maintenance, frequent equipment breakdowns that keep trash trucks off the street, and a potential safety hazard to the public.

“We are tired of seeing millions of dollars go to big banks while our families and neighborhoods are pushed to the brink,” said Jaime Zeledón, a Mar Vista Gardens resident of the Westside renewal group POWER. “We are the ones who have to put up with the sewage overflows and unguarded schools crossings. I’m tired of hearing politicians claim that ‘there is no money’ for the basic services our communities need, when we know there is a surplus and no one at City Hall is taking on Wall Street for all those fees.”

The actions come as bargaining grinds on between management and the Coalition of LA City Unions, which represents approximately 20,000 city workers – over 75% of which are people of color. Fix LA, which includes those unions and a growing array of community and advocacy organizations, are bargaining together as workers and residents to address the deterioration of services, quality of life, and access to middle-class jobs. Specific platform proposals include restoring City staffing levels and vital services to pre-recession levels, promoting a minimum $15 wage, adding crossing guards to elementary and middle schools, and a local hire/job training program to address an aging workforce.