Just a couple of years ago a $15 minimum wage seemed like a pipe dream, today it’s one step closer to being a reality thanks to the relentless work of SEIU 721 in fighting to raise the wage floor in Los Angeles. On Tuesday, the Los Angeles City Council cleared the way to put the City on track to bring up the minimum wage up to $15.00/hr. by 2020.

The City of L.A. will now be the largest city in the country that has taken decisive action to end the poverty wages by holding the McDonald’s and Wal-Marts of the world accountable for creating good jobs and ending poverty pay. L.A. will now join the likes of San Francisco, and Seattle in putting real living wages in place.

Since the Fight for $15 movement catapulted onto the national scene 2 ½ years ago on the East Coast, SEIU 721 has been the Fight for $15 driving force on the West Coast to bring about a minimum wage change in its largest city. Local 721 made the conscious decision of supporting the Fight for $15 because raising the wage floor for all working families provides the local better tools to negotiate up for all of its members (watch video). The move proved to be smart one, and a sure bet to protect what 721 members have earned and fought for over the years.

The epic City Council vote could not have been a reality without Local 721’s hard work, foresight, and the active participation of 721’s members sticking up for their fellow neighbors knowing L.A. succeeds when all working families have the opportunity to rise together.  The City of L.A. victory now becomes a blueprint to bring about a $15/hr. minimum wage policy for the County of L.A. This is only the beginning of more great things to come in 721’s fight to restore and protect the region’s middle class jobs. 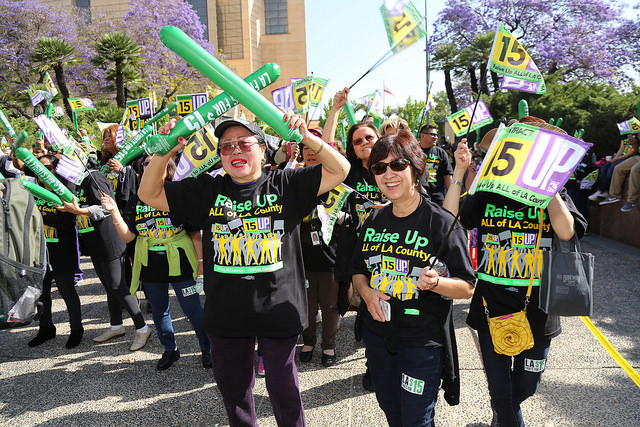 In response to the L.A City Council’s vote on the minimum wage, the 721 Leadership put out this statement:

“Today’s vote is a victory for the brave workers who have stepped out into the streets again and again demanding a living wage for all working families,” said Bob Schoonover president of SEIU Local 721.  “At the end of the day, poverty wages are bad for everyone and lifting the minimum wage as soon as possible is key to invigorating our local economy and lifting up all working families.”

Gilda Valdez Chief of staff for SEIU 721 and the president of Fight for $15 LA added,   “Los Angeles must now ensure multinational and profitable industries like McDonalds don’t continue to get a free ride while tax payers subsidize the poverty wages they pay. Delaying a $15 minimum wage for these franchisee employers gives these multinational industries an unfair advantage. According to the Berkeley study, poverty wages cost U.S. taxpayers $152.8 billion a year in public support for working families. Small non-profits and true independent businesses deserve more time but Franchisee employers should be on the same track as the giant corporate networks that help brand and ensure their success.”