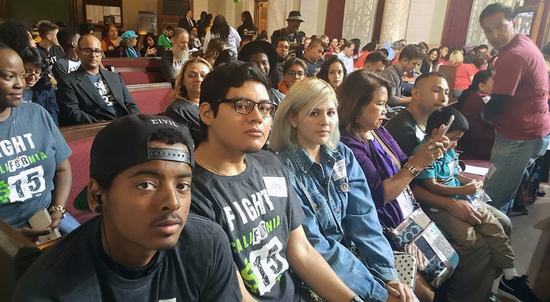 “Today’s victory without a doubt belongs to the men and women who dared to dream of a better future for their families. Our city of Angels took a historic step towards building a city with prosperous communities by invigorating our local economy.

“LA’s victory was sparked by the group of courageous fast food workers who two years ago ignited a movement nationwide and today this movement is paying off for every worker in every sector in Los Angeles. 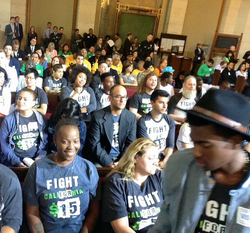 “Lifting the floor for LA’s lowest wage earners will ultimately benefit every worker in our city. For too long we have seen the cost of living go up while workers across the board are forced to endure poverty wages and frozen wages. Working people – both union and non-union are being asked to work more for less, all while profits for big banks and corporation hit an all-time high. This victory is a testament to the undeniable power of everyday people coming together in full-force against income inequality and demanding at minimum a paycheck that allows them to pay for their basic needs.

“SEIU 721 members know that our strength is grounded in our ability to rise together and this is why we will continue to stand shoulder to shoulder with Fast Food workers in their fight for $15 and a Union. When we fight – we win!”