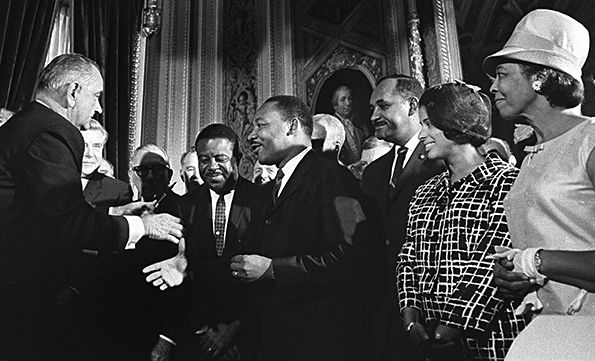 President Lyndon B. Johnson, Martin Luther King, Jr., and Rosa Parks at the signing of the Voting Rights Act on August 6, 1965.

SEIU 721 is proud to celebrate the 50th anniversary of the Voting Rights Act.

The Voting Rights Act, championed by the Civil Rights movement and ultimately made possible by everyday individuals who stood up and marched to demand justice, has played a tremendous role in giving disenfranchised communities a voice at the ballot box.

Click here to watch President Johnson’s remarks following his signing of the act.

The Voting Rights Act, signed into law by President Lyndon Johnson on August 6, 1965, aimed to overcome legal barriers at the state and local levels that prevented African Americans from exercising their right to vote under the 15th Amendment.
The Act was transformative, profoundly altering American social and civic life, making it easier for black Americans to register to vote and increasing the number of black elected officials.

But fifty years after its passage, the laws’ promises remain unfulfilled. As recent as 2013 the Supreme Court struck down a core provision of the 1965 Voting Rights Act, just as numerous states were passing restrictive voter identification laws likely to suppress the turnout of black and poor citizens.  On Aug. 6, as we mark the 50th anniversary of the 1965 Voting Rights Act, we remembe those who sacrificed for its passage. We need to take stock of what has and has not been achieved and challenge the forces that continue to segregate and oppress our communities through racial and economic hierarchies. Through our commitment to lifting up working families and the communities we live in, Local 721 will continue to protect and stand up for livable wages, workplace protections, and a government that advances social justice.

Won’t you join me in protecting and advancing this rich legacy we have inherited?