Today, working families across California are celebrating the signing of Senate Bill 3, which establishes a pathway to a $15 minimum wage by 2022. This historic legislation will lift California’s working families out of poverty, and transform the lives of the 6.5 million Californians who earn less than $15 an hour.

Click here to watch the YouTube video that tells the story of how our workers made history!

The movement launched by fast food workers three years ago has now completely changed the conversation around income inequality in this country. Today’s historic bill signing shows that when working people unite to fight for living wages and a voice on the job, we win.

Together, we celebrate this unprecedented legislation – but make no mistake: it was Local 721 and the Fight for $15 coalition that led the way. The courage, tenacity, and dedication shown by fast food workers and their allies has made our call for $15 and union rights a reality.

Below you’ll find photos from today’s signing ceremony and the Fight For $15 worker signing event. Click here to view the full online album.

Because this victory was won by workers, it was only fitting for workers to hold a signing ceremony for Fight For $15 coalition members in the streets, outside of the State Building where the nation’s first $15 per hour minimum wage was signed into law.

Be proud of the work you have done. But do not relent.

The movement we’ve launched is unstoppable, yet we will not declare victory until all workers win a livable wage and a voice on the job, benefits and a seat at the bargaining table.

We’re fighting, and we’re winning. But we’re not done yet.

Now more than ever, all eyes are upon our members and community partners. We must turnout as never before for this April 14 strike to deliver an unmistakable message:

Click here to contact the Member Connection so you can join us. And see you on April 14. 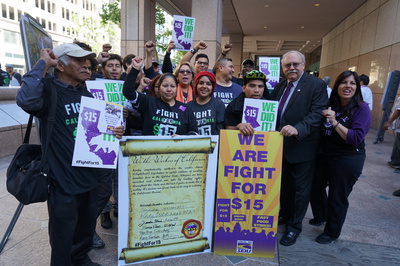