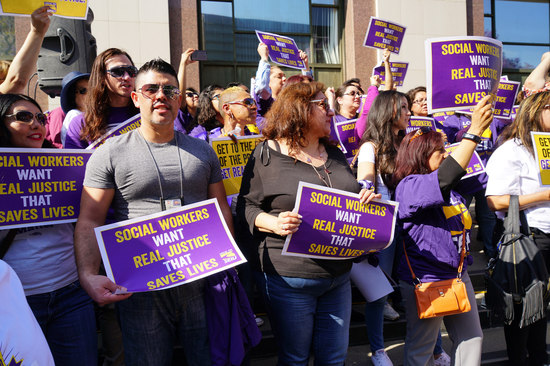 LOS ANGELES – Thousands of Social workers across L.A. County will participate in a day full of actions across offices of the Department of Children and Family Services (DCFS) urging Director Phillip Browning to fix the child safety crisis caused by dangerous high caseloads.

The countywide worksite actions arrive on the heels of District Attorney Jackie Lacey’s unprecedented and reckless decision to prosecute four Social Workers based out of the DCFS Palmdale office whose children to Social Worker ratios rank amongst the highest and most dangerous in the entire county. As the arraignment gets underway in a Los Angeles Court, Social Workers from the Antelope Valley to the Harbor area are uniting to make it clear that criminalizing Social Workers will not save lives and ultimately fails in getting to the root of the problem at DCFS.

“Everyday and around the clock we are entrusted to protect the lives of our county’s most vulnerable children yet we’re saddled with an alarming number of cases that puts everyone in danger with no relief in sight,” says 15-year DCFS Palmdale Office Social Worker Sarah Garfield.

“In California we should have no more than 14 cases per Social Worker, but just in the past two months Palmdale DCFS social workers have averaged over 30 cases! Our Director Philip Browning keeps touting that caseloads in some DCFS sites in L.A. County have gone down, but lets be clear by ‘down’ he means that some averages reach about 24 cases instead of 30, again this is still way above the optimal limit of just 14 cases per social worker to ensure the safety of children,” Ms. Garfield added.

As part of the “Katie A” agreement, counties across the state of California must be in compliance with an optimal caseload average of 14 children per Social Worker. The settlement is part of a class action lawsuit filed in federal district court in 2002, where the California Department of Social Services (CDSS) and the California Department of Health Care Services (DHCS) agreed to take specific actions to strengthen California’s child welfare and mental health systems, including caseload ratio compliance. The Katie A Lawsuit, sought to improve the provision of mental health and supportive services for children and youth in, or at imminent risk of placement in, foster care in California and it reached a settlement in 2011. The five plaintiff foster children requested, in lieu of payment, that “the County and State” improve upon their delivery of services to all children and young adults under the custody of DCFS, and/or those at risk of entering the child welfare system.

However L.A. County Department of Children and Family Services has yet to be in compliance with best practice caseload ratios set for California. In the Palmdale DCFS office alone, Social Workers have averaged 34 and 30 cases respectively for February and March of this year. With a week and a half to close out the reporting for the month of April, the average caseload for Social Workers is already at 30.

L.A. County’s child safety crisis is direct result of the current Social Worker shortage and a runaway caseload crisis plaguing DCFS offices throughout the County. Social Workers fear the prosecution of the four Social Workers will only worsen the situation, compelling qualified Social Workers to choose to work in other jurisdictions altogether out fear of being one paperwork error away from landing in a courtroom.

“For every new Social Worker who comes into DCFS, an alarming number quit within the first few months and others go on leave due to the insurmountable pressure of a child safety crisis that the DCFS leadership has yet to fully address,” says 14-year DCFS Palmdale Office Social Worker Kim Young.

Social workers warn that the very circumstances that led to Gabriel Fernandez’s tragic death are still largely in place today in the Palmdale office and in offices across the county, despite repeated outcry and mobilizations from Social Workers over the years. In June of 2012, a year before the death of Fernandez, Social Workers filed a Group Grievance In General Character (known as a GGIC, the equivalent of a class action lawsuit on behalf of workers) demanding the caseload limit be immediately addressed in the emergency response unit. Just months later, a neutral arbitrator found that DCFS consistently violated workload limits.

Thursday’s solidarity actions by Social Workers mark a beginning to a series of worksite actions to fight back against the scapegoating, and demand real systematic changes and accountability to truly ensure children’s safety.