As a testament to his commitment and genuine interest in making immediate strides in creating a bully free DHS, Dr. Katz sent out a department wide memo on May 2nd condemning bullying behavior and asking DHS employees, including management and supervisors, to join him in pledging to treat all workforce members with dignity and respect.The memo also announces forthcoming trainings and asserts his guarantee to honor the SEIU Local 721 contract by ensuring a healthy and professional work environment free from emotional abuse and intimidation. Dr. Katz’s memo strikingly also goes on to encourage open dialogue to end the bullying, including group discussions, at all DHS facilities. Dr. Katz’s encouragement reaffirms the necessity to do what 721 members began doing prior to this memo in organizing member-led forums with hospital management. 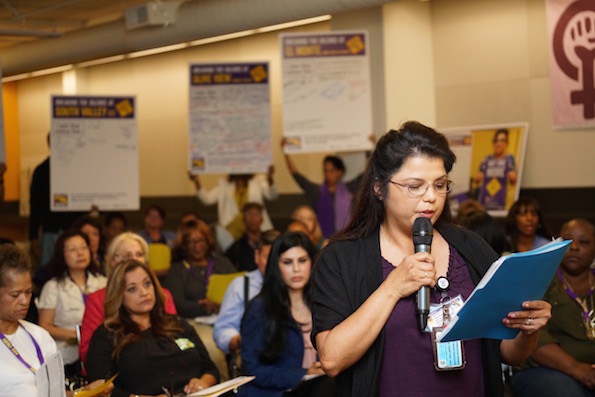 On May 2nd LAC+USC 721 members met with the hospital’s CEO Dan Castillo in a safe and open forum to hear and address the Health Professional’s concerns at the hospital, where more reports of bullying emerged. The bully crisis at LAC+USC and elsewhere has propelled 721 members to form a member led “Bully Watch” response team to immediately support and defend in real-time those who are bullied.

In what will ultimately become the first of more facility specific member led “Bully Watch” worksite meetings and forums that will be scheduled, 721 members have vowed to return to LAC+USC the week of May 9th to launch the LAC+USC Bully Watch Team to support all their brothers and sisters who have been bullied at this location. LAC + USC RN Robin Ellis made it very clear at the first Dr. Katz meeting that 721 members at DHS were prepared to go outside the local’s halls to make sure their voices are heard to bring the much needed reform, and it’s happening.

The April 27th reconvening and the small victories thereafter arrive a little more than a month after SEIU 721 Members first sounded the alarm to Dr. Mitch Katz through emotional and powerful testimonials on members’ experiences with bullying at DHS facilities and the need to establish an unbiased system to report the bullying. The firestorm of bullying stories from throughout the County put the bullying issue right at the feet of the DHS Director and implored him to work with members on eradicating the issue. Chief amongst the members’ asks from the first meeting was for Dr. Katz to launch an immediate investigation into the bullying situation, and provide a report back to 721 members on his corrective actions and plans to solve the crisis. 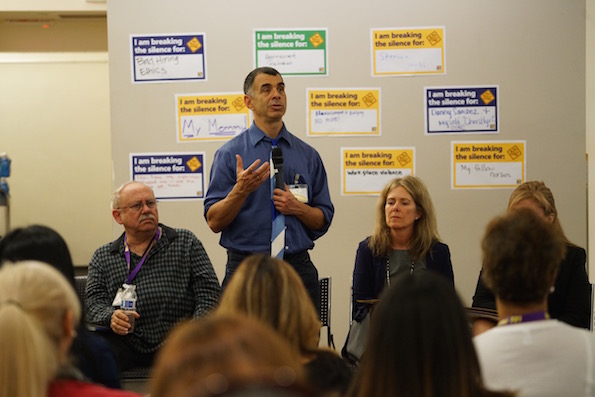 Citing both privacy and County Civil Service rights, Dr. Mitch Katz could not disclose any particular disciplinary information related to the long list of personnel identified by DHS members as bully bosses. However, the DHS Chief did assure everybody in attendance on April 27th that he is committed to continue working with members for the long haul to ensure that there is a system in place where there’s accountability and discipline for management as there’s currently for non-managerial staff.

“There’s a bad thing going on here. We’ve uncovered it and we’ve given people a vocabulary and a place to talk about it,” said Dr. Katz to calm the visibly unsettled audience.

There’s no doubt 721 members are creating a place to talk about the bullying issue and moving from being victims to drivers of desperately needed reform under the “Bully Watch” banner. Since news of the powerful first meeting emerged, new faces and more jaw-dropping reports have emerged from DHS facilities across the County like the account of former Olive View-UCLA Registered Nurse (RN) George Ocegueda, the subject of a new Local 721 member video on the anti-bullying efforts.

Ocegueda personally shared with Dr. Katz on April 27th the troubling ordeal that led him to transfer out to the nearby Sylmar Juvenile Facility because the bullying he dealt with was becoming detrimental to his health. The trouble emerged when he began voicing his concern for the unsafe patient to nurse ratios that would arise when nurses went on break during their shift in the Emergency Room (ER). What began as a serious concern for failing to provide adequate medical care for patients in the ER, quickly backfired on Ocegueda and other staff who were standing up for patients and trying to fulfill the mission of being the provider of choice. 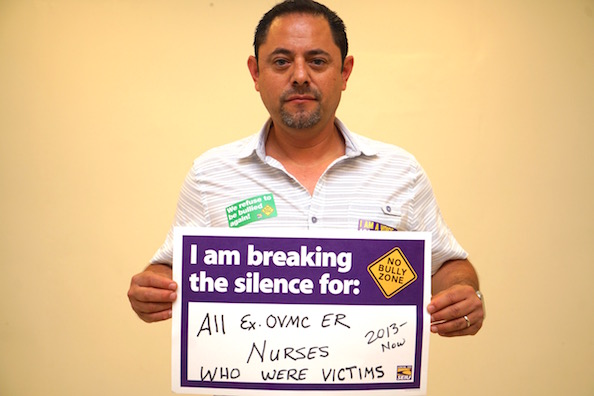 Nurses from Olive View-UCLA filed a formal grievance to alleviate the situation but then they quickly became the subject of retaliation. Seeing no fix to the dire bullying situation in the ER and a bullying issue that was only getting worse, 41 experienced nurses left the unit, leaving only new Nursing Graduates behind.

It’s become very clear that bullying not only affects employees, but also the quality of health care that is provided. This harsh reality has emboldened George Ocegueda to continue speaking out and pushing for the much needed reform at the county level, and at individual health facilities like Olive View-UCLA. He entered the medical field to save and protect lives, and he’s staying to true to this mission with many 721 members throughout the County backing the anti-bully efforts. 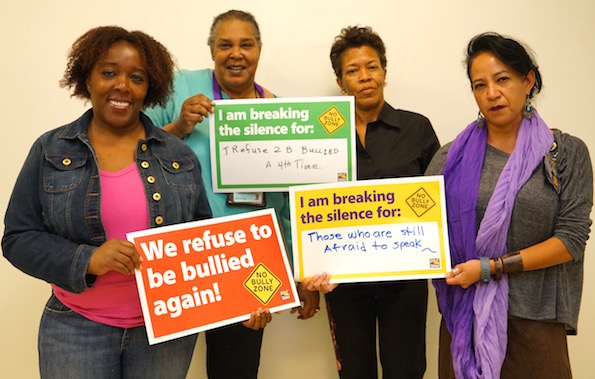 Now more than ever is the time for 721 members to keep the pressure going and continue pressing forward to end the bully crisis once and for all. In just 2 months, 721 members have received the commitment from Dr. Mitch Katz to join them in creating a bully free DHS through the creation of the bully taskforce and trainings, and acknowledging the bully issue is very real. It’s critical that 721 members remain united and get involved in their Bully Watch group at their local facility to seize the momentum, and hold Dr. Katz and all management accountable to ensuring that every LA County health professional has the opportunity to thrive in a safe workplace, and the general public receives the best care possible at DHS.

721 members exposed the issue and they will be the key in solving it once and for all! Stay tuned and talk to your worksite organizer about Bully Watch actions coming to your facility.