LAC+USC’s Dan Castillo’s memo arrived just days after 721 members hosted an anti-bullying forum on LAC+USC premises to share their experiences, and identify directly to the CEO the bully perpetrators and which Hospital units are riddled with bullying.  721 members were firm in their demands to foster a workplace grounded on respect and dignity by asking for similar protected forums with members of the problematic units, and for the immediate removal of a bully manager who has been shuffled around the hospital evading accountability.

Health providers at DHS have highlighted the common practice of “shuffling around” managers who violate the zero tolerance code of conduct, but are never truly held accountable for their behavior.  In fact 721 members first flagged this particular bully manager to CEO Dan Castillo in October of 2014 when they personally met with him on the issue, and followed up with a package containing numerous affidavits documenting the reports of bullying.The affidavits were given to Dan Castillo only after their original submission to Human Resources in February of 2014 went unaddressed. The problem was never resolved and only worsened, prompting the launching of an anti-bully campaign and the formation of Bully Watch at LAC+USC.

Dan Castillo agreed to reconvene with 721 members on Monday, May 16th to provide an update on members’ requests made during the May 2nd forum.

Facing the growing momentum of the member-driven anti-bully campaign throughout DHS, 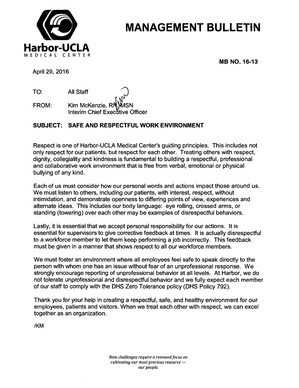 Harbor-UCLA CEO Kim McKenzie also sent out her own memo to all staff imploring them to comply the DHS Zero Tolerance policy (DHS Policy 792) and encouraging reporting unprofessional behavior at all levels. The memo comes just a month after 721 members at Harbor-UCLA held a unity break at the facility, and spoke out in a widely circulated video on the bullying crisis at DHS and Harbor-UCLA.

It’s become very clear that local management like LAC+USC’s Dan Castillo and Harbor-UCLA’s Kim McKenzie have stepped up to the plate in fixing the bullying crisis at their sites. While 721 members have raised the bullying issues before, the reenergized collective efforts to uproot the toxic work environments are already bringing small victories throughout LA County DHS facilities. The Bully Watch team at LAC+USC has stated they are prepared to escalate publicly if CEO Dan Castillo comes back on May 16th with an unsatisfactory resolution to their asks. The stakes are even higher this time around, and they’re not taking no for answer.