“In our glorious fight for civil rights, we must guard against being fooled by false slogans, such as ‘right to work.’ It is a law to rob us of our civil rights and job rights. Its purpose is to destroy labor unions and the freedom of collective bargaining by which unions have improved wages and working conditions of everyone… Wherever these laws have been passed, wages are lower, job opportunities are fewer and there are no civil rights. We do not intend to let them do this to us. We demand this fraud be stopped. Our weapon is our vote.” – Martin Luther King, Jr.

While Dr. Martin Luther King, Jr. is best remembered for his world-changing work in the battle for racial equality, he was also a committed and unwavering advocate for workers’ rights and unions.

King’s most iconic moment actually came at a labor event. Though it is popularly remembered as the “March On Washington.” The full name of the rally where King delivered his “I Have a Dream” speech was the March on Washington for Jobs and Freedom. The rally was organized by labor leaders like A. Philip Randolph, Bayard Rustin and Walter Reuther and the marchers demanded full racial equality, civil and job rights and a $2 minimum wage for all. (If you’re wondering, $2 back then would be about $16 today.)

King himself viewed the fights for civil rights and labor rights as inseparable from one another, saying, “Our needs are identical with labor’s needs: Decent wages, fair working conditions, livable housing, old-age security, health and welfare measures, conditions in which families can grow, have education for their children, and respect in the community.” In King’s eyes, the only way to win rights for every worker was for all workers to stand together in solidarity.

An example of the civil rights movement and the labor movement coming together came in 1964. Oklahoma was voting on whether or not to institute a so-called “Right To Work” law. The Oklahoma NAACP distributed pamphlets featuring King’s strong condemnation of such laws. The ballot measure failed, protecting labor rights in Oklahoma for decades.

In the later years of his life, King grew increasingly vocal about the need for economic justice. This focus culminated in the Poor People’s Campaign – a movement meant to build on the successes and failures of the War on Poverty. King chose to make the Memphis Sanitation Strike a key part of the campaign.

Black sanitation workers in Memphis had been trying to organize for years, but had been unable to achieve union recognition or meaningful change. On Feb. 1, 1968, two workers were crushed to death in a trash compactor while taking shelter from the rain. This was the final straw and, eleven days later, the strike began, with civil rights and labor leaders coming to support the strikers. 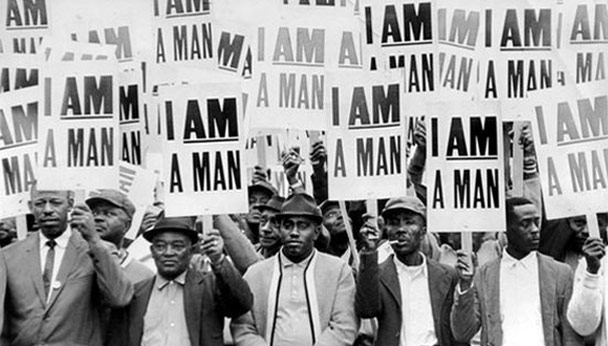 King helped organize and inspire the workers, reminding them that “all labor has dignity” and encouraging them never to give up the fight for their rights. Prophetically, King delivered this message to striking workers on the night of April 3, 1968, “I’ve seen the Promised Land. I may not get there with you. But I want you to know tonight, that we, as a people, will get to the Promised Land.”

The next day, King was assassinated outside his Memphis hotel room.

In the aftermath of King’s assassination, the striking workers didn’t give up hope. A silent march on April 8 was attended by 42,000 people. On April 16, management gave in and the workers won union recognition and higher wages.

The battles that King fought so bravely are not over. It’s been nearly 50 years since King’s death and we have not yet reached the Promised Land. In some cases, we’ve gone backward. While King and other activists may have defeated Right To Work in Oklahoma in 1964, the law eventually passed in 2001. In this time of a renewed assault on workers’ rights, we should do our best to follow in King’s footsteps, fighting injustice everywhere and refusing to be fooled by false slogans.