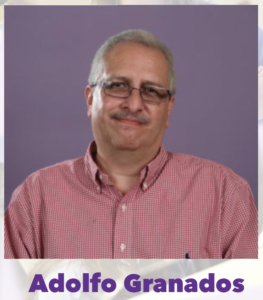 Adolfo Granados was in the 7th grade when he and his five siblings learned a life-changing lesson in the agricultural fields of Fresno, CA.

After noticing the kids had become a bit too “comfortable” living the city life in Burbank, Adolfo’s father whisked the family off to central California to show them how he had grown up.

That all changed over the summer as the Granados kids found themselves picking grapes and oranges from sun up to sun down. Once, when he told his mom he needed to use the bathroom she handed him a roll of toilet paper and said, “find a spot.”

They were definitely NOT in Burbank any more.

“I’ll never forget that experience,” Adolfo said. “So now when I see the field workers I appreciate how hard they work and how everybody just does what they have to do to make their living. From then on I appreciated everything that I had and it wasn’t like trying to be like the Joneses.”

A career of Helping

It’s an outlook that’s served him well in his career in social work. As an Eligibility Worker II for the Los Angeles Department of Public Social Services, Adolfo makes sure people who need them receive services like CalFresh, CalWorks, Medical, housing assistance, etc.

He’s seen and heard just about everything: from people who’ve struggled and clung to the edge their whole lives to doctors and lawyers who turned to alcohol or drugs for comfort following tragedies and wound up losing all they had.

“I learned at an early age to treat people like how you want to be treated, so I never judge,” he said. “You hear the sad stories and I know that could be me sitting on the other side of the table. I’m there to give them the benefits they need and make them happy.”

One case in particular stands out.

A mother came to his office in tears and was distraught about not being able to feed her young family. Adolfo reassured her, walked her through the process and was able to get her qualified for assistance. As the grateful mother was leaving, her little girl slipped him a piece of paper that he absentmindedly tucked into his pocket and didn’t open until he got home. The note simply read:

“Thank you sir for giving us food.”

“That was really touching to me. I took it to work and showed it to my colleagues and some of the ladies started crying,” said Adolfo, who still has the note. “But that’s what we’re here to do – make a difference for people and help people.”

And one of the biggest ways he enjoys helping people is through his work at SEIU 721, where he’s been a member for 18 years and serves on the Executive Board. He’s been working at SEIU 721 on lost time since June.

While he enjoys working on the labor side, negotiating contracts, etc., he’s especially passionate about community causes and organizations like the Fight for $15, FixLA, the Latino Caucus and Environmental Justice.

Riled up by “Right to Work” for Less

Adolfo generally has a genial disposition but one topic that’s guaranteed to get him riled up is “Right to Work.”

He’s deeply disturbed by how much traction the “Right to Work” attack on unions has gained in recent years and says people need to truly understand what’s at stake and get more fired up.

Part of 721’s RTW Advance Team, he goes to worksites to educate members about the threat and the healthcare issue is one that usually puts everything into perspective.

“When we do presentations I’ll ask how many people have Kaiser and about 80 percent of hands will go up. Then I’ll ask how much they have to pay for it and a lot of times they’ll say they don’t have to pay anything,” Adolfo said, adding that many of those in attendance know people who pay $500 or even $700 a month for their plans. “That’s when I say, ‘Ok, how would you like to be paying that if our union isn’t there to fight for our benefits?’

“And boom, they get it. They’re in,” he said. “That reality kicks in… I always go for the health insurance because those costs are what we can all relate to.”

He attends as many events as he can and is often recognized because even if you don’t know his name, his 6’6 frame definitely stands out. Surprisingly, Adolfo was 5’8 until his early 20’s when he grew by nearly a foot. At first he didn’t like his new height, finding it awkward to be so much taller than everyone else. But he’s come to love it and doesn’t mind the stares from adults and pointing from little kids whose eyes grow big as they whisper; “Look mom, it’s a giant!”

“I just have fun with it now and I joke around telling people it’s raining up where I am and that my height means I’m closer to God,” he said laughing. “Also, I can always see what’s going on even if I’m standing in the back of a crowd.”

A long-time bachelor, Adolfo got married for the first time in April, although his friends joke he’s been married to the union for years. When people would chide him about getting lonely because he still wasn’t married at 57, his response would be, “I don’t have time to be lonely; I’m always at the union!”

But then he met a beautiful brunette named Mabel. Suddenly he was spending a little less time at the union and making it a point to see her in between his various meetings and group activities.

On more than one occasion he took her to the movies after a long day only to fall asleep during the flick, but she never got mad. That, along with her cooking, caring heart and sense of humor, is how he knew she was a keeper.

“Most people would’ve gotten mad but she would see me sleeping and then later just joke around with me and say ‘how did you like the movie? She knows how hard I work and what I do,” Adolfo said, smiling while proudly displaying her picture on his phone. “When I get frustrated, she’s the one who encourages me and keeps me going. I’m really lucky that I found such a good woman. She’s a keeper.”

Categories: The Work We Do
Tags: members | right to work | Rise and Resist | SEIU721 | union