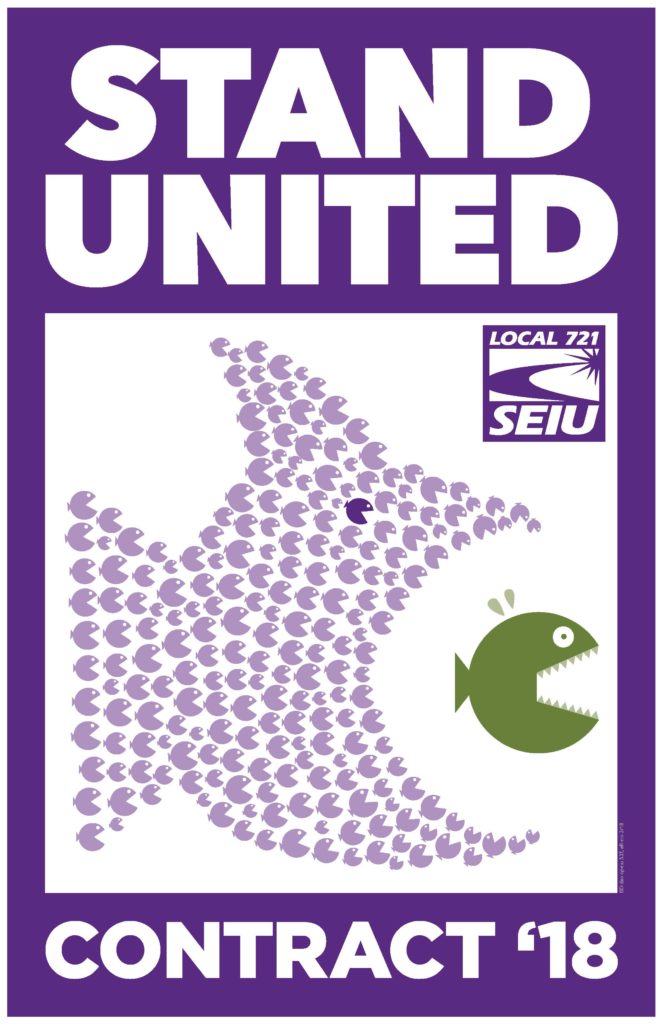 The rising cost of living is putting the American Dream out of reach for our too many of us. Health care costs are ballooning. Child care and elder costs are, too. Property costs are shooting through the roof and so are rents. Increasingly longer commutes, mass transit fare hikes and gas taxes are taking a toll. Massive student loan debts are crushing the younger generation while older workers worry whether their retirement dollars will stretch enough to meet their future needs.

L.A. County works because we do. We are the workforce that keeps L.A. County clean, healthy and functioning. We deserve a strong contract. But we will get it only if we stand united!

Our defiant message came in the wake of news that the Association for Los Angeles Deputy Sheriffs (ALADS) reached a tentative agreement with L.A. County last week. It includes a general salary movement of seven percent over three years.

Cost of Living in L.A. County Continues to Rise

SEIU 721 negotiators pointed out that the cost of living in L.A. County is rising faster than any other metropolitan area in the nation. From May of 2017 to May of 2018 – driven by sharply higher prices for housing and gasoline – the cost of living in L.A. County increased by 4.1%. “L.A. County’s ‘general movement’ would mean that our families would be falling behind,” said SEIU 721 Bargaining Policy Chair Linda Dent. “We’re not settling for that. SEIU 721 members are standing united for a fair contract.”

Dent also reminded L.A. County negotiators that any agreement would need to cover projected increases in medical premiums. “Cover our health care,” Dent said. “Provide pay raises to keep up with the rising cost of living. These things are basic and your workers deserve them.”

Meanwhile, in a show of solidarity, SEIU 721 members have begun wearing “STAND UNITED” wristbands. AND WE’RE NOT TAKING THEM OFF UNTIL WE GET A GOOD CONTRACT!

Now 7% is actually great if it s a 2 year contract because it breaks down into 3.5% a year for two years. Lets counter with a 2 year instead for 7%

Guest
Illegals and Criminals got a raise

Realistically – County should be laying out a 10.5% – 3 year increase. They have clearly shown to have the extra funds with the creation of new social programs and departments. The homeless, the illegal immigrants, mental health patients, the incarcerated, are all getting chunks in the millions while we get a kick in the butt.

7% is not enough when your life is on the line everyday.

Known that there is 7% on the table we should get more we do the work and we need the money that go’s with the work Cost of living is very hard for a lot of county workers who is barley making it living pay check to pay check, I know that there is money that we can get because everybody is getting it homeless immigrants mental health patients what about us I know we need to help but don’t leave us hard worker with a little change

Any Updates? Last since June…

I agree 7% is not enough, let’s keep fighting for an increase

Guest
7 Percent is a joke

7 Percent is a joke

That’s not even cost of living. We have to unite and stand up to them. The board are all Millionaires. They have there hand in the cookie jar. They to need to treat us fairly. That’s all were asking for.

Those increases in property tax, fuel tax, etc. are a direct result of political lobbying by the union. The union backed every one of the individuals that voted for those increases. Including raises in health care costs. You reap what you sow. And you wonder why the Janus decision fell the way it did.
That said, their offer is an insult to intelligence. The current GDP is up 4% plus, and predicted to keep that pace for at least the remainder of the current presidents term.

Let’s not forget that the union also backed the entire BOS, who are now offering us a pittance. By all means, let’s keep backing liars

The cost of living does not match what the average person’s pay. So 7% is not enough. It’s like we’re getting pay minimum wage for the amount of work we do daily for a career. Two incomes are needed just to survive in Los Angeles County.