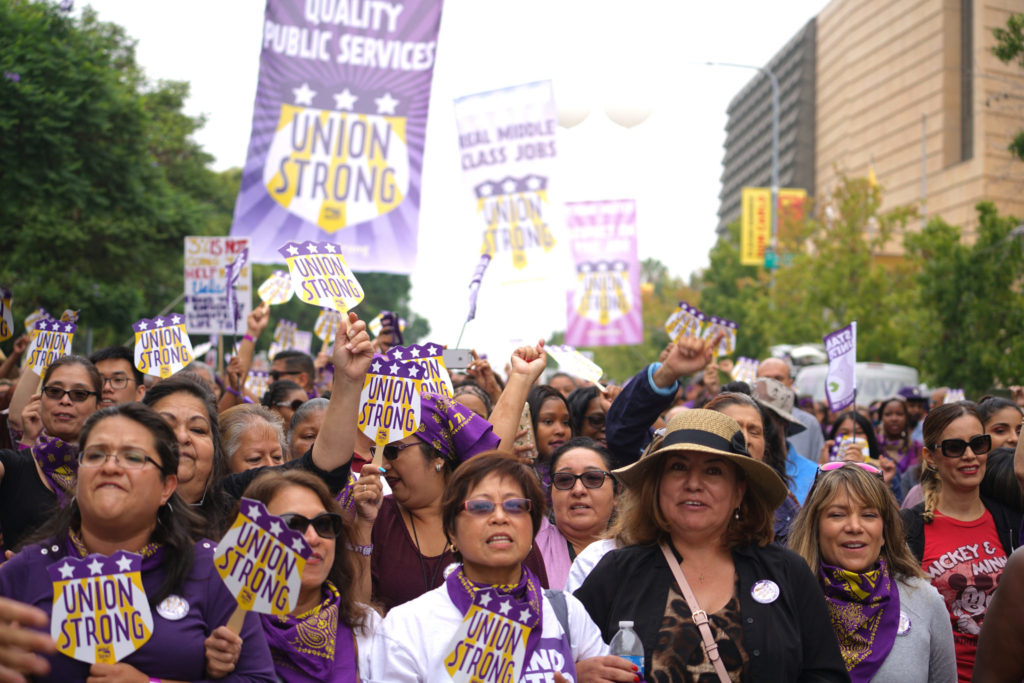 With contracts set to expire at the end of the month, L.A. County workers took to the streets for a massive “Stand United for L.A. County” march and demonstration directly outside the Kenneth Hahn Hall of Administration in downtown Los Angeles. 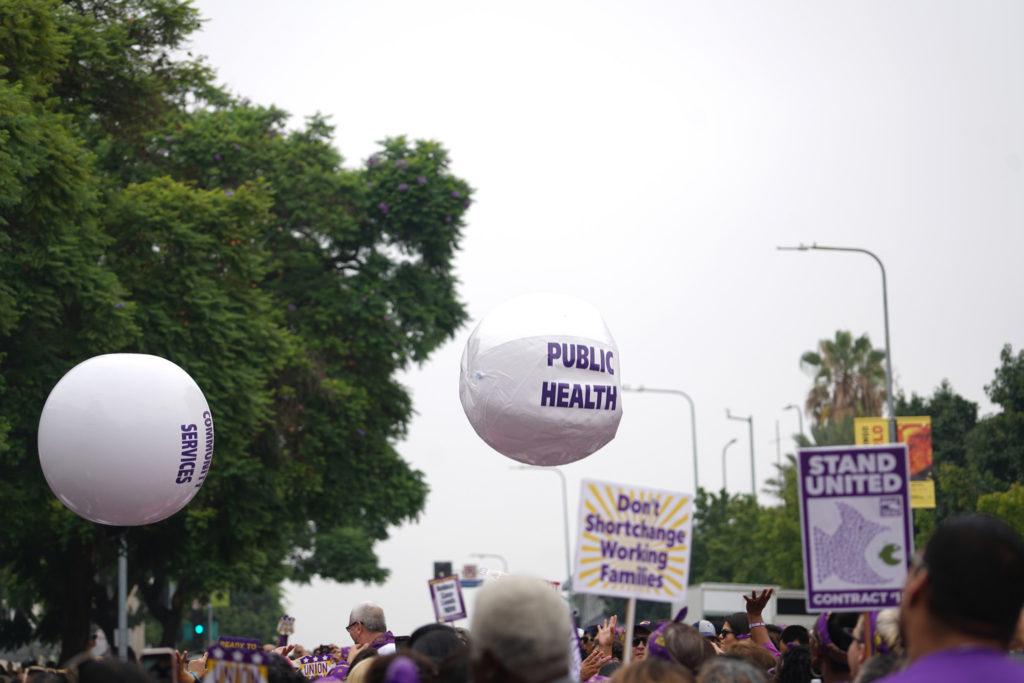 During the pre-march rally, members enjoyed a live band and kept half a dozen beach balls up in the air, which symbolized the array of services they keep up and running every day.

At the rally, members highlighted how issues of compensation can be intertwined with concerns about working conditions — which, taken together, affect the quality of services provided to the public.

“We can recruit nurses but we can’t retain them because we don’t pay them enough,” said Cynthia Mitchel, an LAC+USC Medical Center Registered Nurse and one of three SEIU 721 members who spoke during the pre-march rally. “It’s time for us to stop being the training ground for Kaiser!”

“That’s a cut to our healthcare — that’s my car payment,” said Meliza Hernandez, a Recreation Supervisor at Loma Alta Par. “It’s a hit to my family — to my child. It’s personal.”

For social workers, whose members comprised a big portion of the attendees, the stakes are particularly high this year.

“We will not be scapegoated,” said Andy Garcia, an Emergency Response Children’s Social Worker II. “We have earned the 15-to-1 caseload ratio. We know we need it. The State of California says we need it. And the kids that rely on us need it. We’re not just fighting for a contract. We’re fighting for justice. We deserve it. We have earned it. And we’re going to get it! 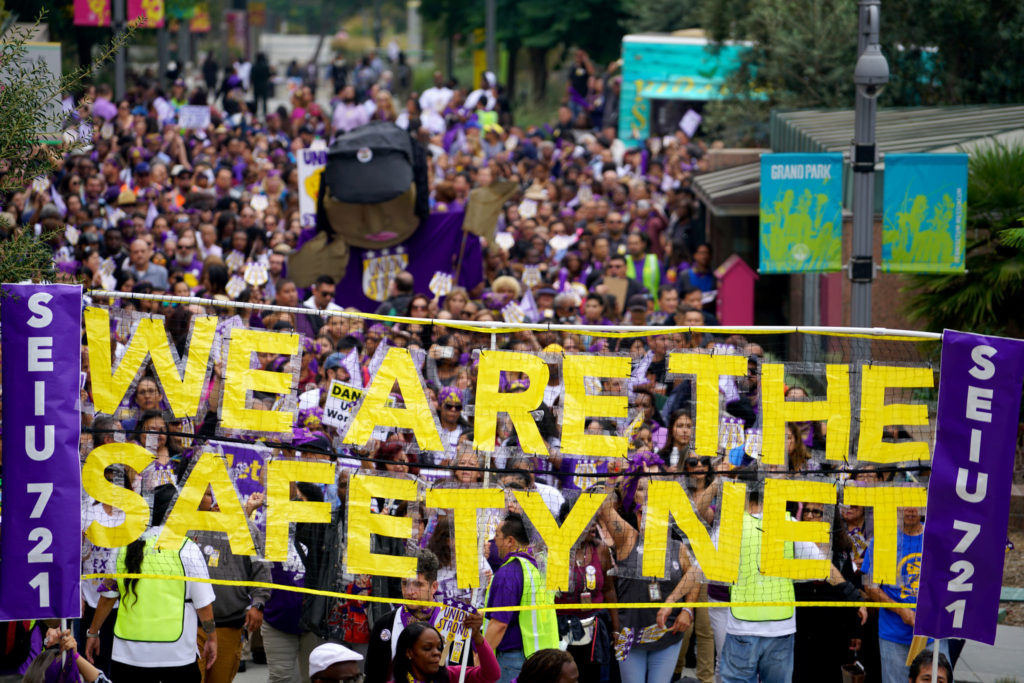 Members holding aloft a netting with the words “We Are the Safety Net” affixed to it led the march into downtown L.A.’s Civic Center, with three floating banners flying above the procession. They were joined by Lucha, the union’s popular puppet, who donned a cap with the L.A. County seal and wore a Union Strong T-shirt of her own.

As they marched, four members plus the union’s vice president prepared to testify before the Board of Supervisors during their last official meeting before contracts expire.

Two key issues affecting all 24 Bargaining Units continue to linger. First, members are advocating strongly for salaries that keep up with the cost of living. Second, members are standing firmly against any cuts whatsoever to the county’s Options healthcare contributions; indeed, back in the 1990s, SEIU 721 members went on strike during Operation Rolling Thunder specifically to secure fully covered healthcare benefits.

“The cost of living for our members is going up, up, up,” said SEIU 721 Vice President Linda Dent during her testimony before the Board of Supervisors. “But this contract does not offer them salaries that keep up with the cost of living. Instead, it offers them big cuts to their healthcare. That doesn’t just affect them. That affects their families. And that’s no way to show respect for the work they do.”

Carlos Rosales, a Grounds Maintenance Worker at Dockweiler Beach, described how the proposed contract falls far short of what’s needed for his fellow members within the Department of Beaches & Harbors to keep their footing in the American middle-class.

“L.A. County was once world-famous not just for its pretty beaches and rich harbors,” Rosales said. “It was once world-famous for its strong middle-class, for the American Dream. But this proposed contract? For many of us, it’s the beginning of the end of that dream. That cut to our healthcare? That would be a nightmare, especially for anyone on the family plan. So we urge this Board of Supervisors: Come back to the bargaining table with a contract proposal that reflects respect for the work we do. We’ve earned it!” 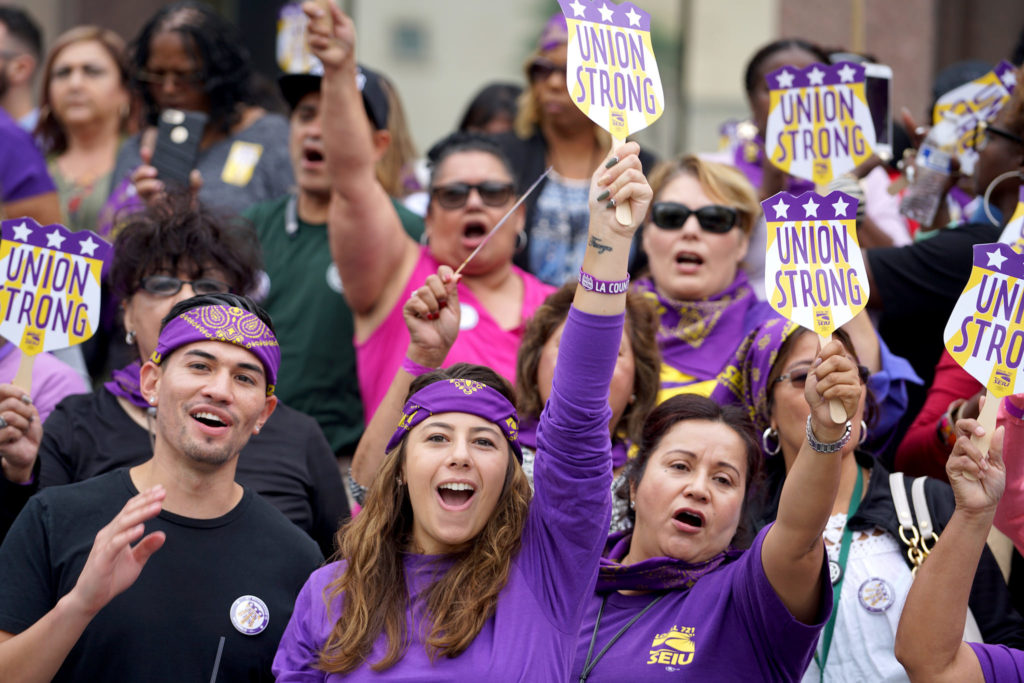 So what’s the latest news ? Are we gonna know by this week if we get a raise