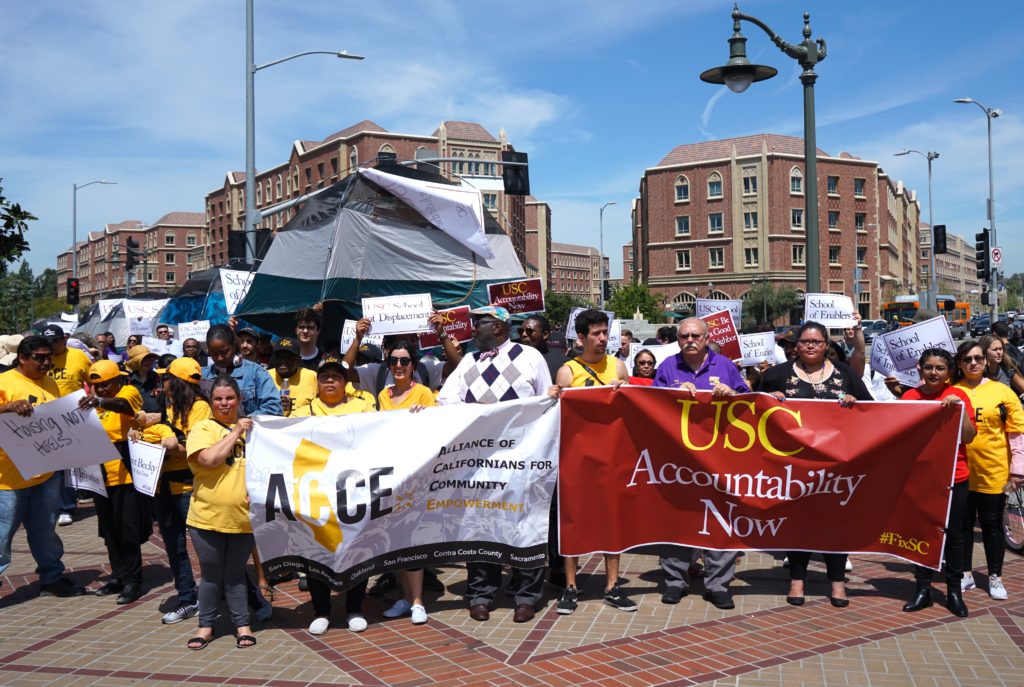 A coalition of students, academia, tenants’ rights groups, living wage advocates and clergy joined graduate students from USC Forward and our SEIU 721 members this week by building a #FixSC Tent City at Jefferson Boulevard and Hoover Street – holding USC leadership accountable for their string of scandals and fiascos. This includes USC’s failure to allow their own graduate students to organize without harassment – and USC’s failure to immediately recognize and bargain with faculty from the Roski School of Art and Design, whose members voted three years ago to form a union.

“USC boasts a $5.5 billion endowment and over $9 billion in assets, with tuition costs of over $55,000 a year rivaling Harvard and Yale,” said Bob Schoonover, President of SEIU 721. “USC’s graduate students are doing the actual teaching and cutting-edge research. Yet, somehow, USC can’t afford to pay them a living wage and decent benefits. That’s called greed – and that’s unacceptable.”

“We know the value we bring to USC,” said Bill Russell, a graduate student and member of USC Forward. “Yet they cancelled spousal healthcare coverage. This means my wife and I have to pay out-of-pocket for medical care while we try to raise our family on an income just barely above the threshold to qualify for food stamps.” 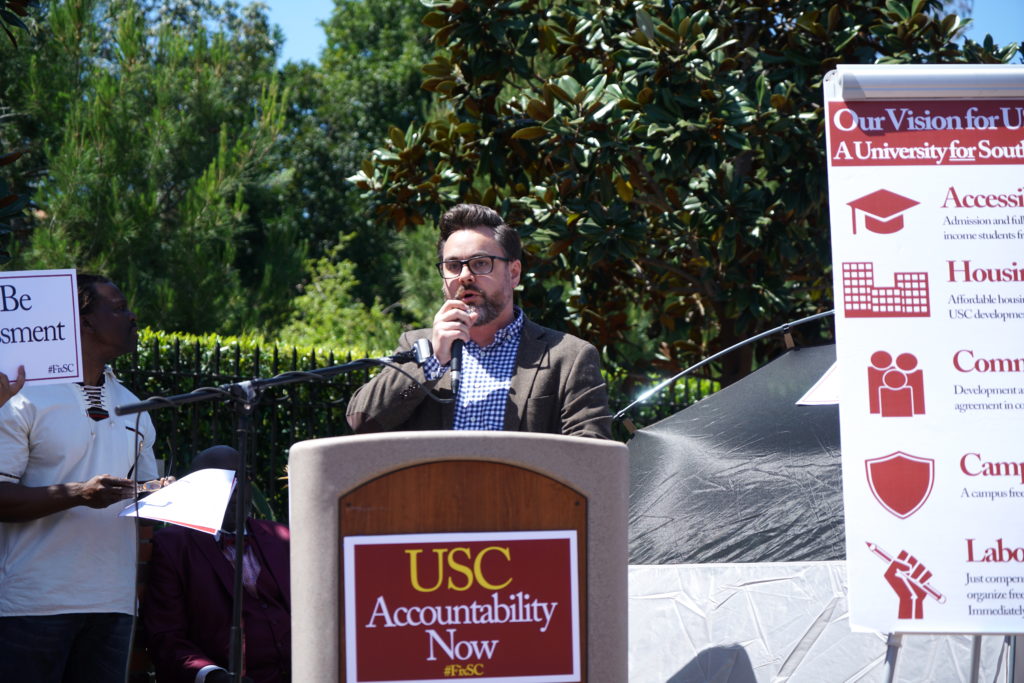 The #FixSC Tent City encampment emerged with the start of the LA Times-USC Festival of Books this past weekend. It remained an epicenter of activism for Angelenos fed up with the destructive effects of policies pushed by USC’s leaders, both on campus and off – from citywide gentrification and attacks against graduate student unionization to mishandling of alleged sexual assault of USC students and alleged mishandling of the university’s admissions process potentially involving bribery and fraud.

“USC has lost its way,” said Pastor Cue Jn-Marie of The Church Without Walls, which ministers on Skid Row and beyond. “For too long, the leaders of USC have lived in an Ivory Tower, indifferent to the suffering they create and perpetuate.”

“Throughout Los Angeles – in neighborhood after neighborhood – the public policies perpetuated at USC are destroying the fabric of our city,” said Pastor William Smart, President and CEO of the Southern Christian Leadership Conference-Los Angeles. “City Hall greenlights yet another luxury condominium development while the people of Los Angeles literally beg for affordable housing. And it is USC’s own leaders who are pushing these destructive policies.” 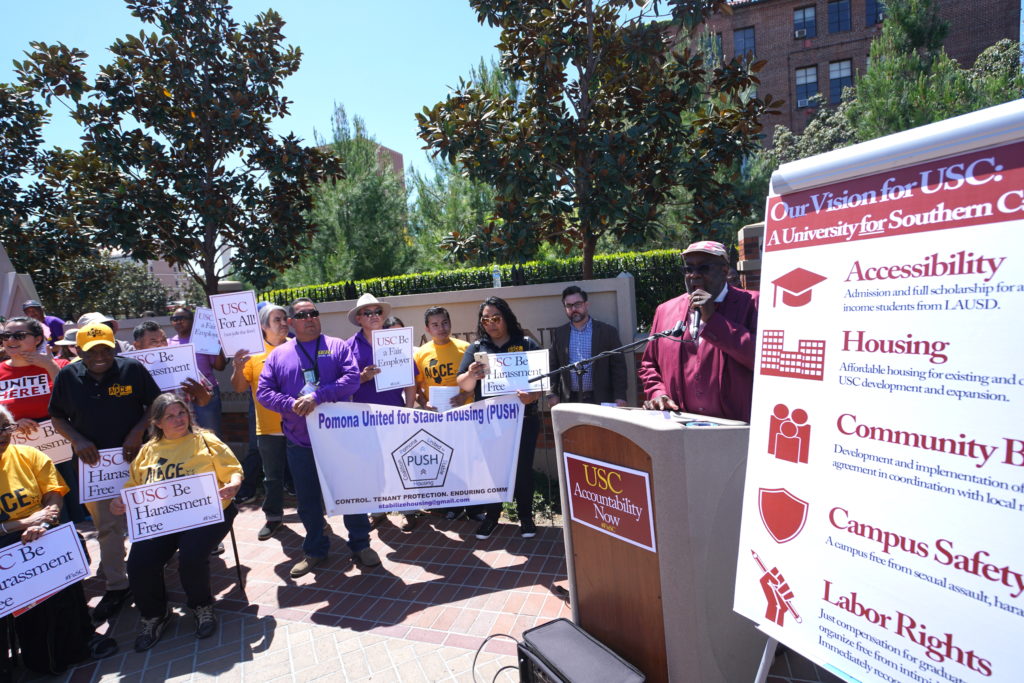 “There is a direct connection between the lavish developments being pushed by USC and the tent cities you see popping up all over LA,” said Luis Ocampo of the Alliance of Californians for Community Empowerment (ACCE). “We want housing in our neighborhoods that we can afford, not luxury housing that makes our neighborhoods unaffordable. That’s why we brought our Tent City directly to USC’s doorstep. We will not allow USC to ignore the damage they’ve done to our city and the people living in it.”

During the Festival of Books, just yards away from the Tommy Trojan, the Coalition ran its own tent packed with #FixSC carnival-style games and prizes. 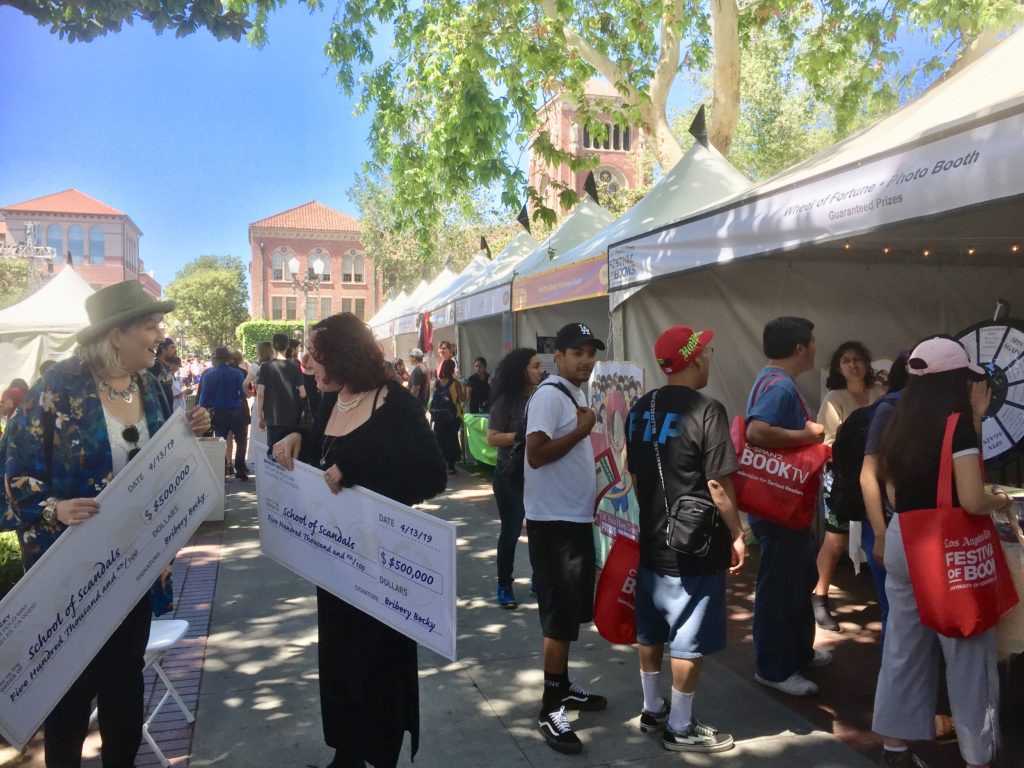 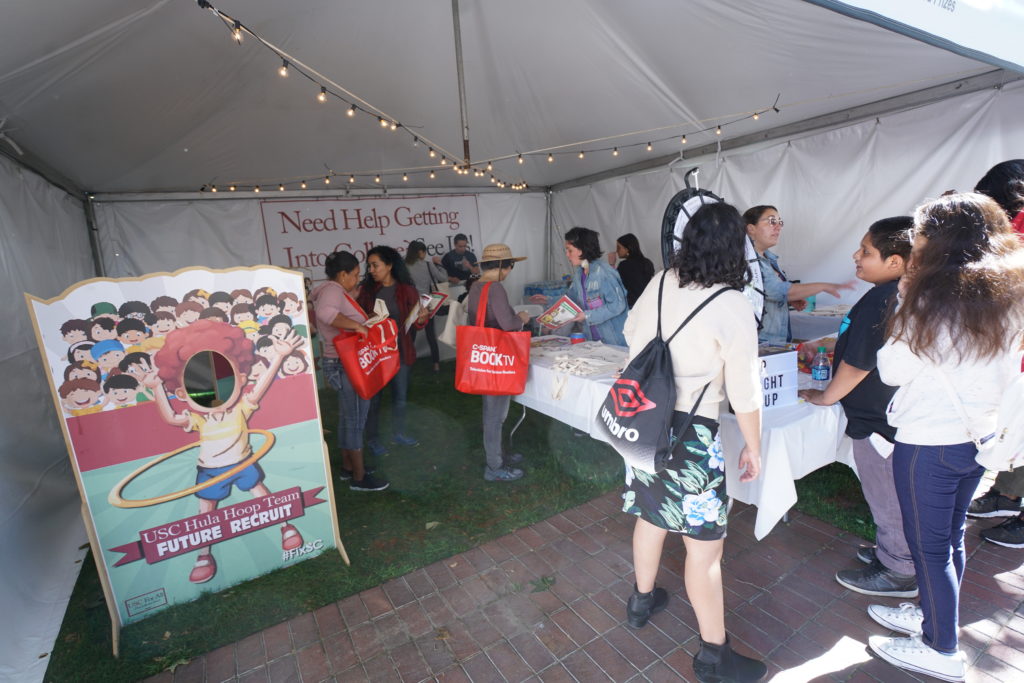 On Palm Sunday, Coalition participants held a community Mass. It included listening sessions with local politicians as well as tenants’ rights workshops and legal clinics for residents hit hard by gentrification at the hands of USC’s civic elite. The action drew elected officials and prominent leaders from across Southern California and beyond – including Former Senate President pro Tempore Kevin de Leon. 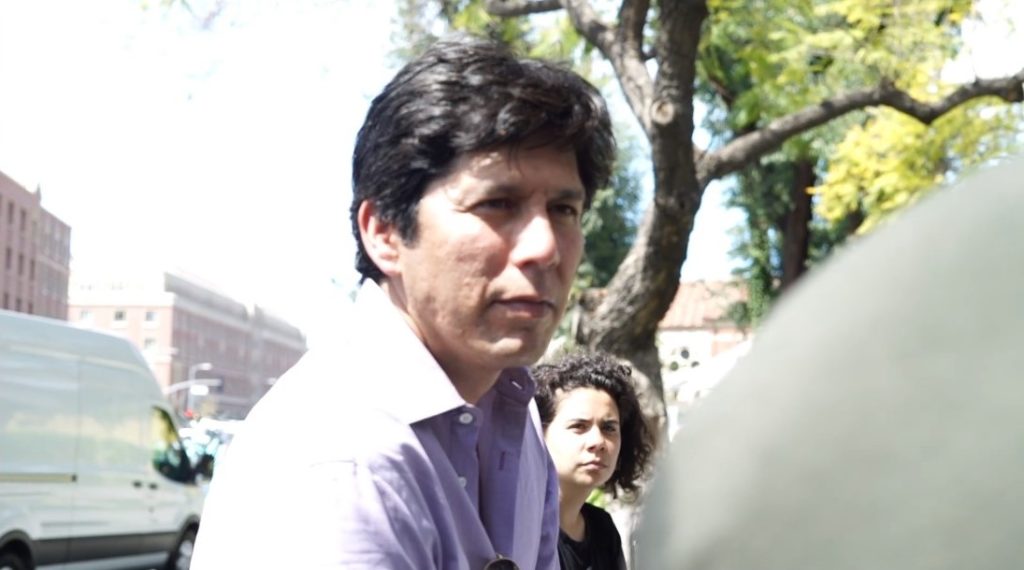 During one listening session, undergraduate student activist Shany Ebadi described the attitude of indifference conveyed by USC’s leaders even toward victims of sexual violence. 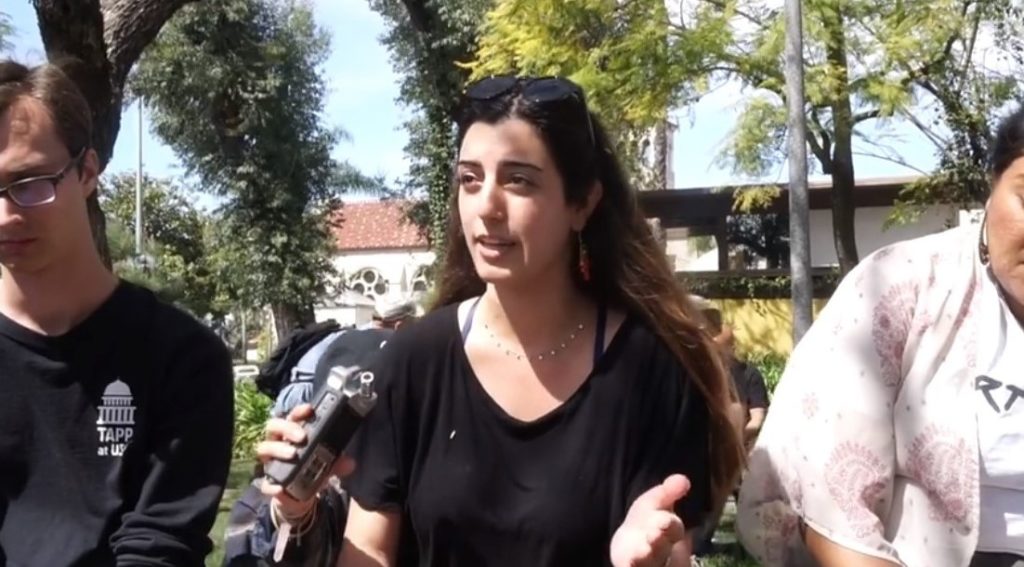 “These women were silenced purposefully and systematically by the USC administration. Their complaints went nowhere for decades,” Ebadi explained. “The students have really been showing up and speaking out against this injustice – and we’ve been met with a meeting or two and promises that this wasn’t going to happen again. And that’s not going to be satisfactory for anybody or any victim to something that is so tangible that it affects the way that you live,” said said, noting also that while most alleged student sexual assault victims at USC were women, they also included men – and that USC custodial staff suffer from on-the-job sexual harassment.

As the work week started, the #FixSC Tent City stayed up. 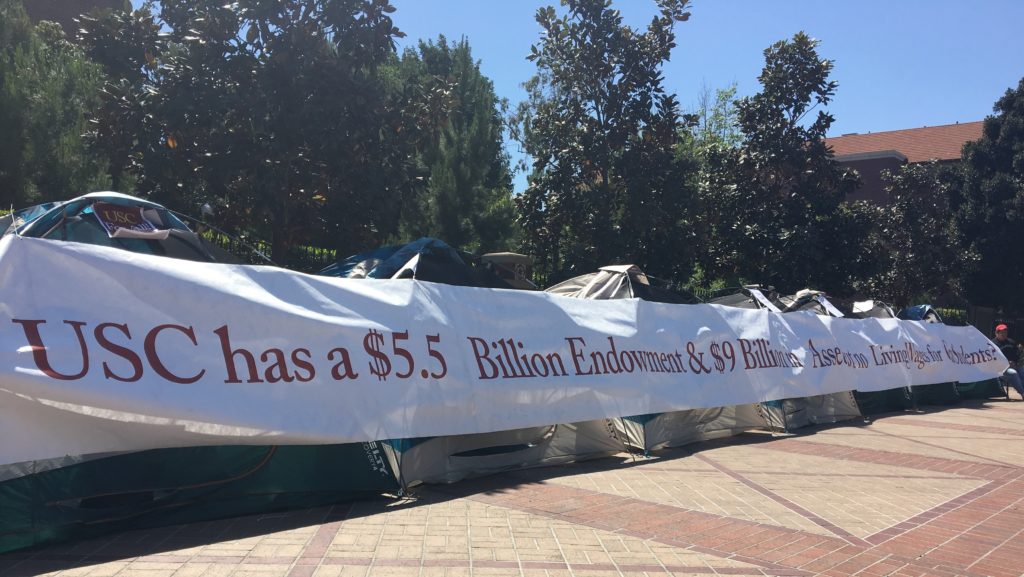 By Tuesday, the Coalition had delivered an official letter to Dr. Carol Folt – USC’s new president – and her new administrative team. 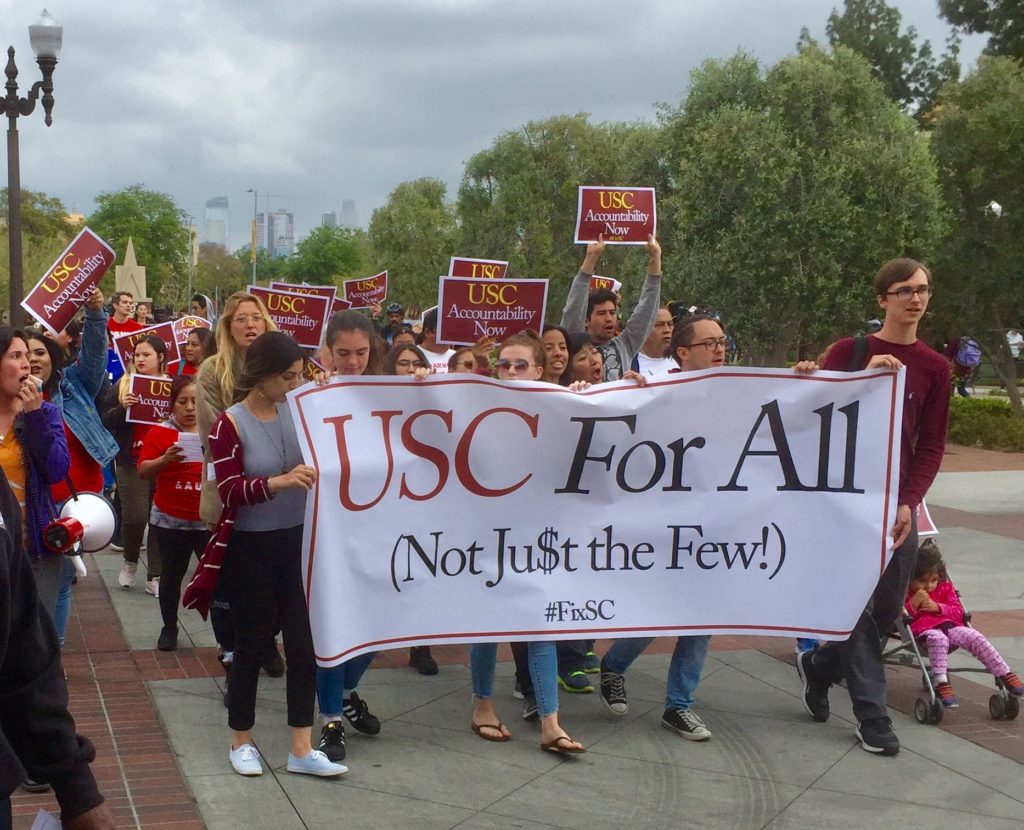 The letter reiterated a list of demands, which included:

When USC’s leaders failed to respond after 48 hours, Coalition members took the #FixSC Tent City directly up Trousdale Parkway into the heart of campus on Thursday. 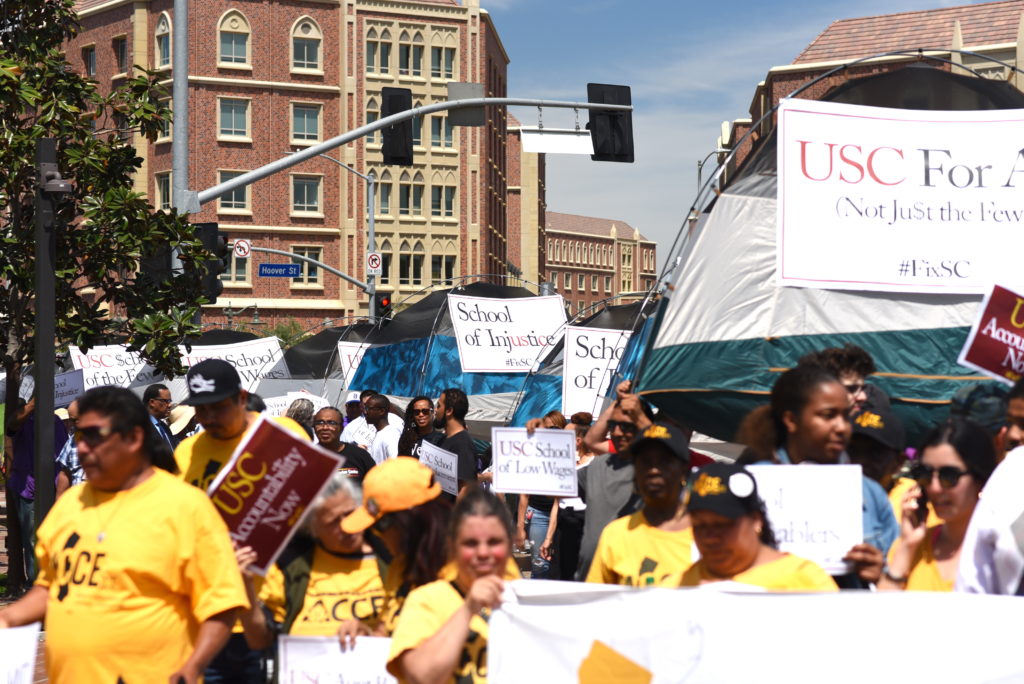 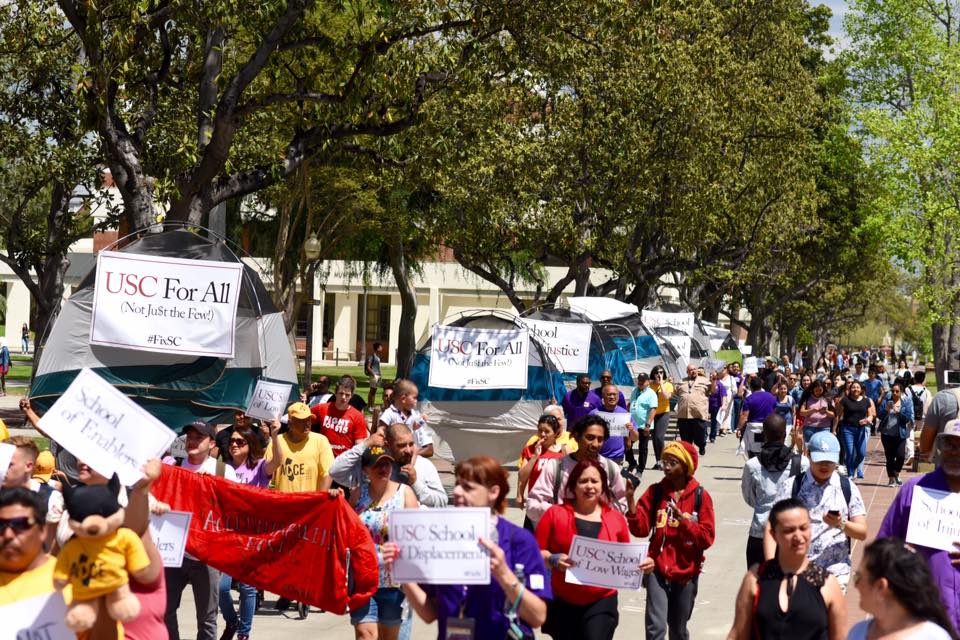 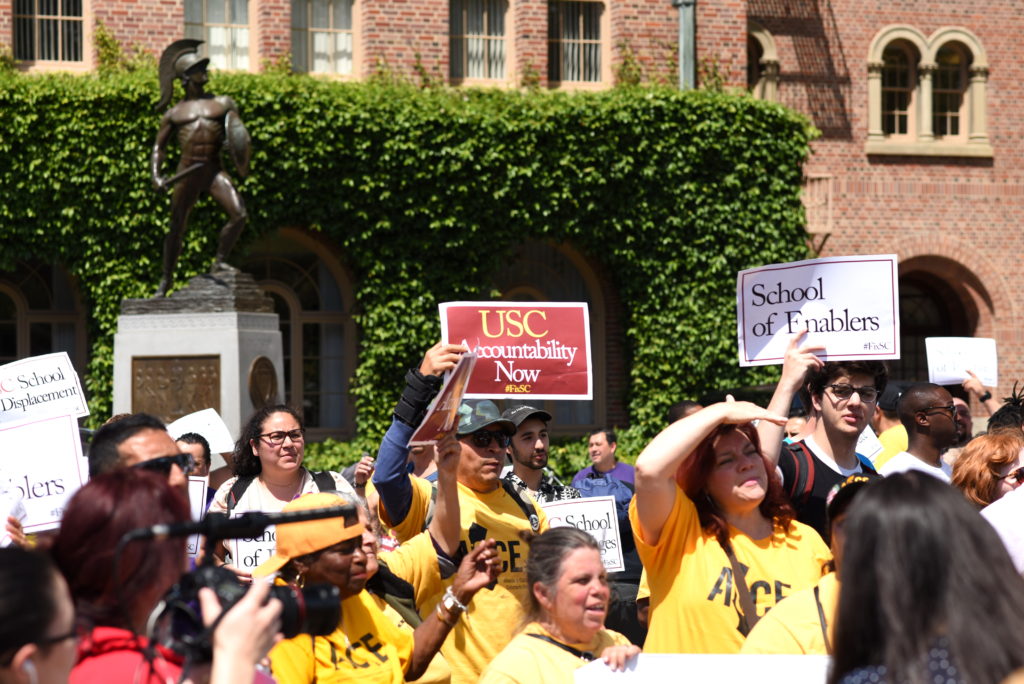 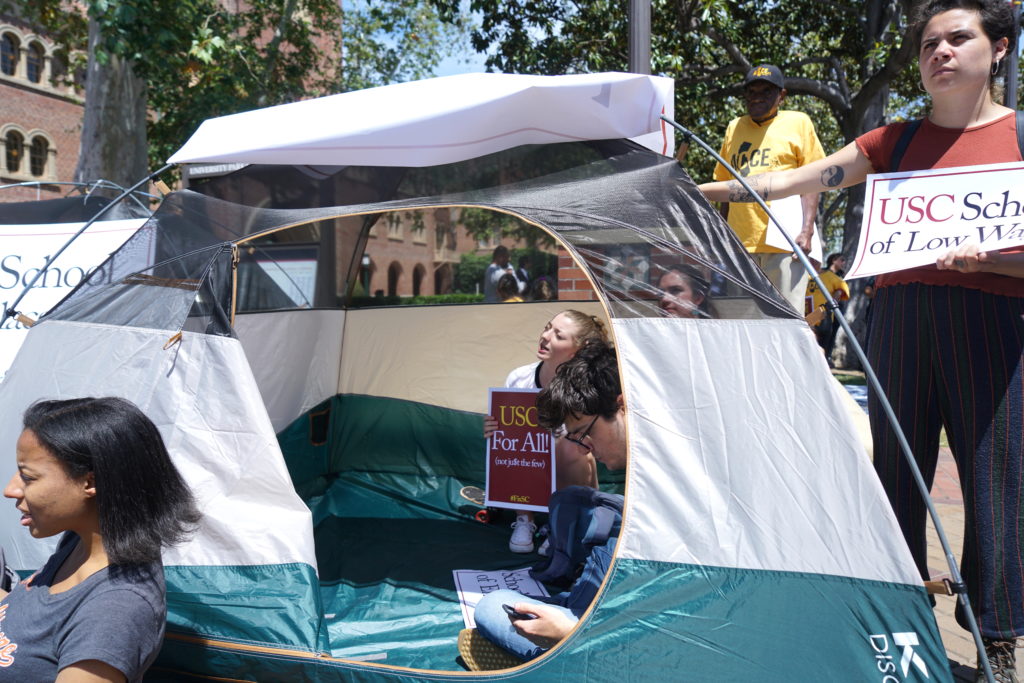 As Coalition members rallied outside Bovard Auditorium, a delegation demanded a response directly from administrators inside.

After giving an immediate and wholesale dismissal of any concerns outside the immediate confines of the university’s property lines, Dennis Cornell – USC’s Chief of Staff – begrudgingly accepted what he called the Coalition’s “gift” of a signed sleeping bag that symbolized the cold comfort USC provides to the victims of its institutional indifference. 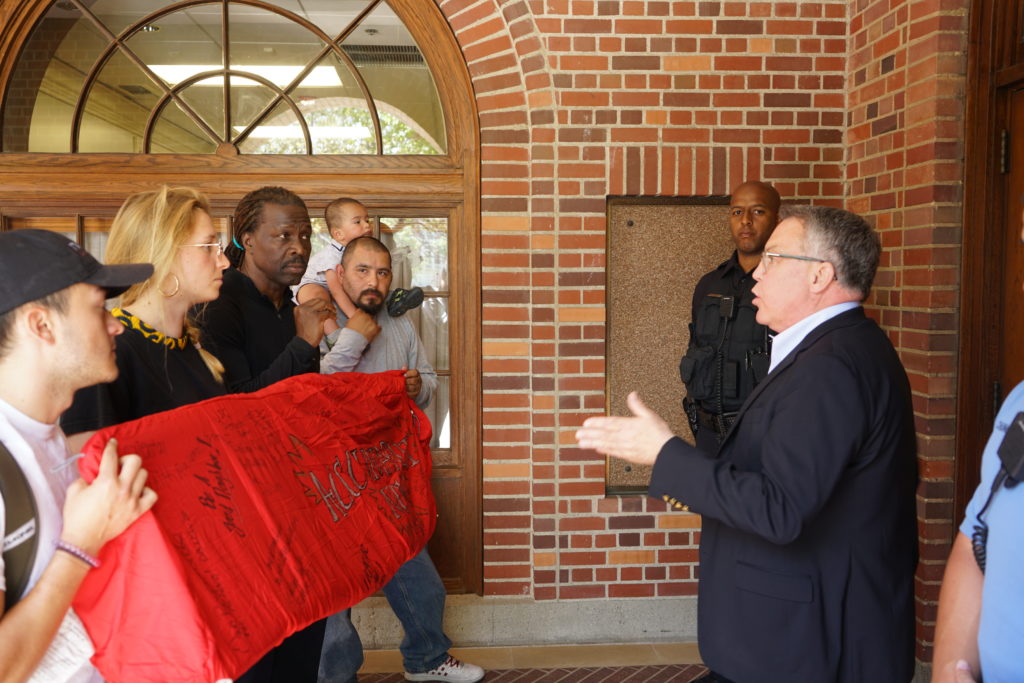 Cornell then dubiously claimed to have settled the entire matter through email correspondence with a student he was either unable or unwilling to identify; he either would not or could not produce the email in question at the time when asked to do so by members of the Coalition and the media.

Then he turned around and closed the door.

As Coalition members chanted, “We’ll be back,” SEIU 721 President Bob Schoonover called out USC’s new leaders for failing to take meaningful action – and failing to accept the resolve of the Coalition.

“The new president says she wants to make it right,” Schoonover said. “Well, Dr. Folt: Here’s your chance! We are here to get justice for USC’s South LA neighbors, for this city, for USC’s students, and for its graduate students and adjunct faculty. We demand accountability now. We will fight on until we get it. And when we fight, we win.”

For a video recap of this week’s #FixSC tent city action, click here. And for more images, follow us on social media: @seiu721 @uscforward 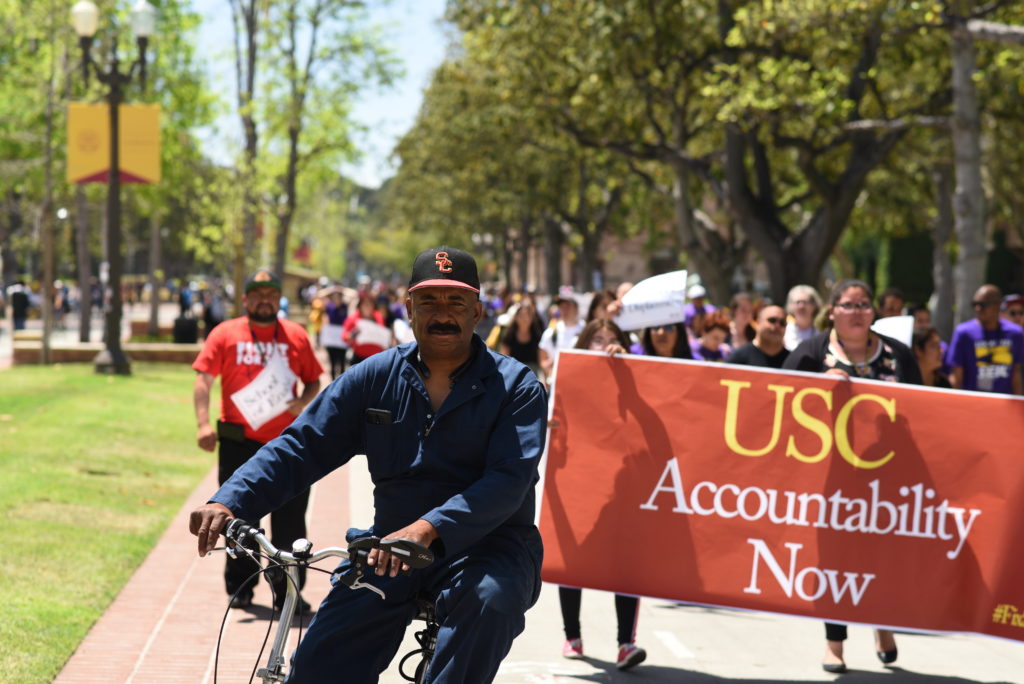