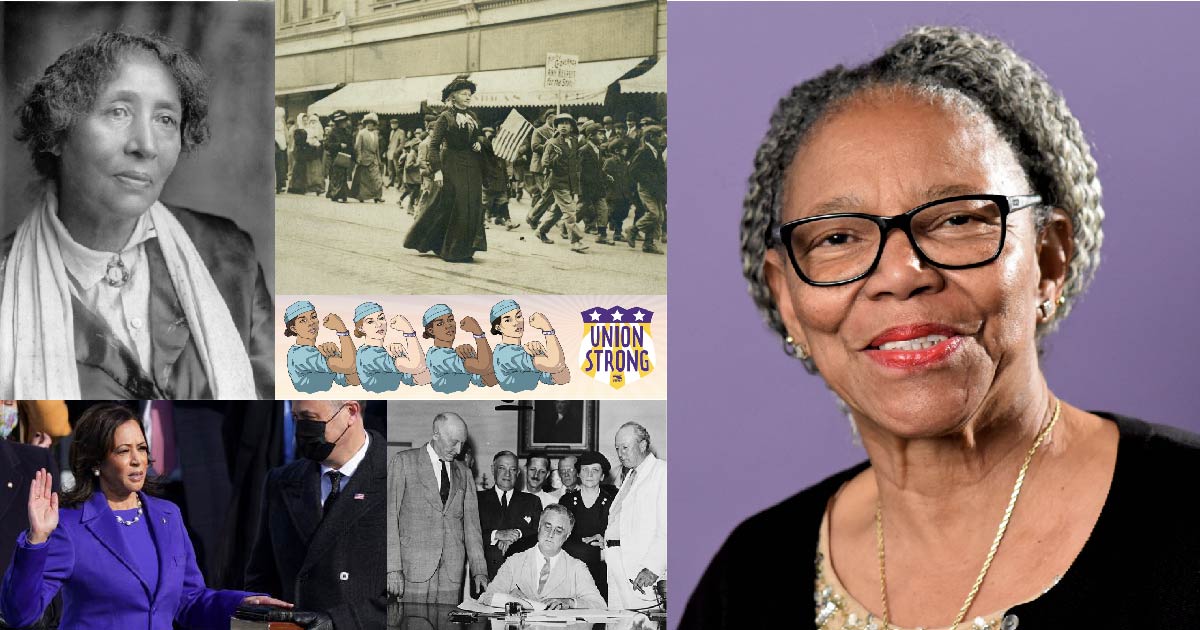 Today is International Women’s Day – and this year, we have a lot to celebrate. From California’s very own Kamala Harris becoming our nation’s first woman Vice President to our very own Linda Dent becoming the first woman President of SEIU 721, the wonder women all around us continue to break the glass ceilings of power long held almost exclusively by men.

And it’s not just in the political arena where women are making a massive difference.

Healthcare and education have long been considered “pink collar” jobs since women comprise the vast majority of nurses and teachers there – and it is in these two fields especially where we worked wonders during COVID-19. At SEIU 721, LVNs and RNs working from Ventura County to Los Angeles County to San Bernardino County and beyond risked their lives under excruciating and exhausting circumstances. They still do!

Most “pink collar” social work and clerical jobs still are filled by women – two additional fields that make up big portions of our union’s ranks. Even as the pandemic paralyzed so much of society, they rose to the challenge. Social workers still found ways to do their duty and keep kids safe while clerical staff fulfilled their obligation to keep government going – and, in the case of clerical staff stationed at City Clerks’ and County Registrar-Recorders’ offices last Fall, to keep democracy functioning.

Even in work spaces where women don’t dominate, their growing presence in what were once industries only for men signal that it’s a new day. This discrepancy is still the case in many fields – from structural and chemical engineering to road and infrastructure maintenance.

But it’s also the case in the American Labor Movement, though women have always been part of it.

Mary J. Harris Jones, AKA “Mother Jones,” is still famous for once literally being named “the most dangerous woman in America” during the turn of the last century – all for the supposed crime of demanding child labor laws. She remained undaunted and, spearheading a massive Children’s March from Pennsylvania to New York, took her demands directly to the home of then-President Theodore Roosevelt.

Lucy Parsons, an African-American labor activist during an era of blatant racial segregation, was a powerhouse as an orator and a fearless champion of labor – going so far as to help found the Industrial Workers of the World during a time when unions were not even legally sanctioned by American law. Chicago police in the 1920s called Parsons “more dangerous than a thousand rioters.”

Francis Perkins was the first woman to serve in a Presidential Cabinet under then-President Franklin Delano Roosevelt during the Great Depression. Labor Secretary Perkins prioritized workers over the wealthy. With FDR, she helped put millions of desperate people back to work through the Industrial Recovery Act, the Civilian Conservation Corps and the Public Works Administration – which employed many artists of both sexes whose masterpieces can still be admired throughout America today.

And now our very own Linda Dent serves as President of SEIU 721, breaking a local glass ceiling for females in the Labor Movement while simultaneously blazing a path for African American women in particular to be proud of. Linda has been with the Los Angeles County Treasurer-Tax Collector as a part of the Clerical unit for several decades, always a loyal Sister of Labor. A key figure within the African American Caucus during her time with SEIU 721, Linda has made it her priority to ensure that all voices are heard and respected – especially those that have been traditionally marginalized and ignored. The Labor Movement has encountered significant challenges locally and nationally during Linda’s time and, throughout it all, she has been our Wonder Woman – determined not to let anyone forget that it is the working men and women of America who make this nation run, a fact brought into sharp focus during the COVID-19 pandemic and which we in the Labor Movement will never forget.