Frontline workers from various public sector unions throughout LA County – including SEIU 721 – demanded cost-of-living increases to fight inflation at a press conference today held outside a Shell gas station in Chinatown near downtown LA., where prices at the pump were as high as $6.94 a gallon. 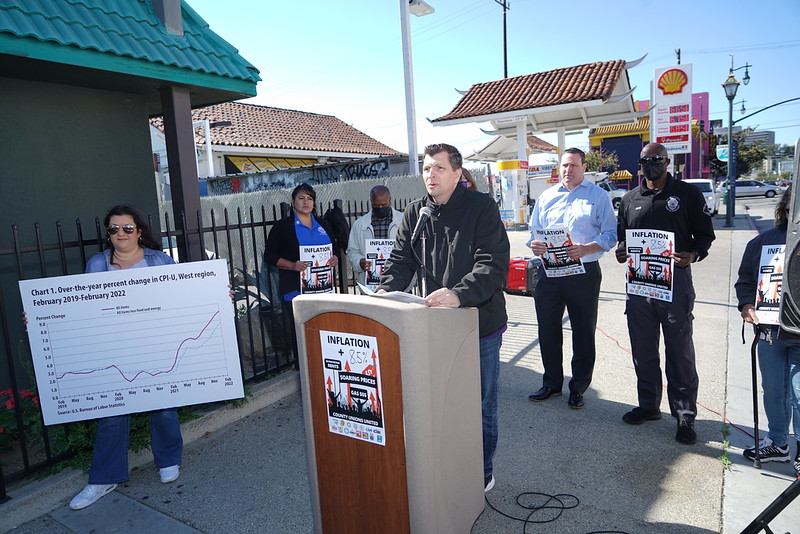 The demands by union workers for “More Compensation to Fight Inflation” come as the U.S. Bureau of Labor announced earlier this morning that inflation for the month of March hit 8.5% – the biggest jump in over 40 years. 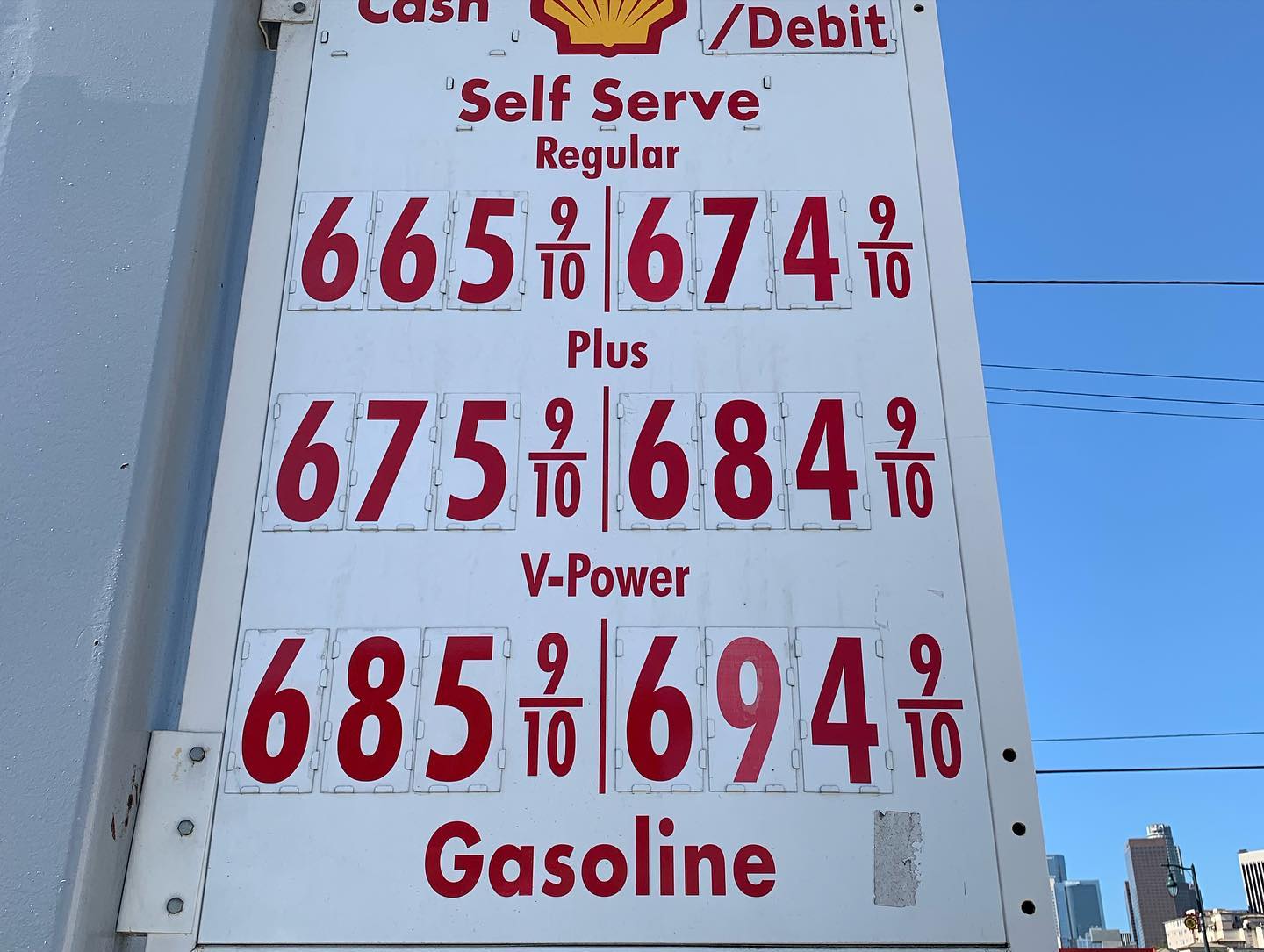 “We’re gathered at a gas station this morning because the sharp rise gas prices – perhaps more than anything else – symbolizes of the plight of workers today,” said David Green, President of SEIU 721. “It’s getting to the point where we can’t afford to get to work. How will our elected leaders respond to the inflation crisis? Will they let workers continue to bear the brunt? Or will they adjust wages to keep pace with the historically high price increases? Will they give us more compensation to fight inflation? That’s what we need.”

Today’s press conference follows last Thursday’s “Fight for the Frontline” march and rally, which stopped traffic through downtown Los Angeles and was eagerly attended by thousands of LA County workers. As their midnight contract expiration date loomed, LA County’s frontline workforce took to the streets to ensure that their key contract bargaining demands were met.

The fight against inflation is proving to be a major sticking point as the price of everything from rent to a bag of groceries to a gallon of gasoline skyrockets – and there’s no end in sight, particularly in light of the U.S. Labor Dept.’s latest inflation numbers. 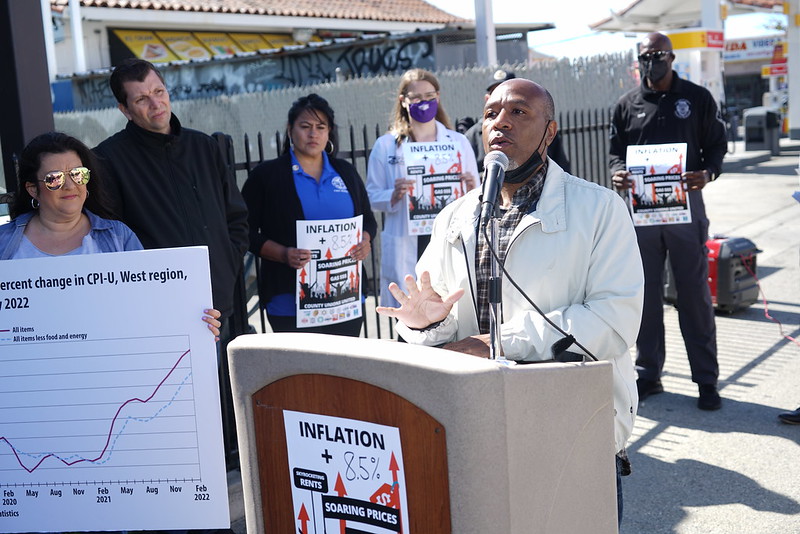 “I have a good job and I shouldn’t have to go through making a decision whether I’m going to buy food or buy gas,” said Deric Horton, a Medical Caseworker II for the LA County Dept. of Health Services at the Augustus Hawkins Clinic. “We just ask for a good paycheck. Milk is $5 a gallon. There was one week not long ago where the price of gas doubled in one week. We are at the point where we are having to choose between buying food or putting our kids in athletics or tap or ballet.”

Fifteen unions representing over 85,000 workers currently in negotiations with L.A. County have made plain that the rising cost of living is a major bargaining point. These unions include:

SEIU 721 members are preparing to hold a strike vote beginning next week.

“We County workers know our worth. Our pay and benefits reflect how much LA County values us. And right now, all I can say is that what LA County leaders have offered us for pay shows that they don’t value us very much,” said Angie Calleros, a Recreation Services Supervisor at Valleydale Park in Azusa, which is part of the LA County Dept. of Parks & Recreation. 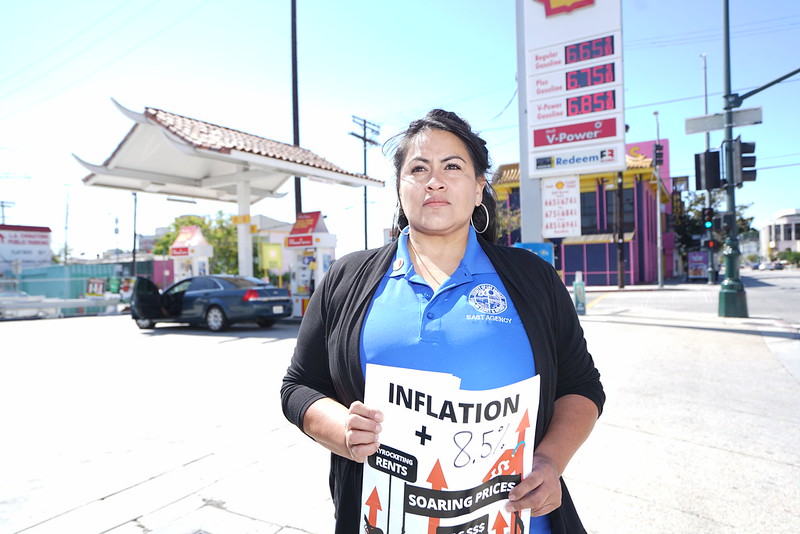 “LA County workers have been on the frontline keeping the LA area running throughout the pandemic,” Calleros continued. “We’ve worked hard, sometimes putting ourselves at risk. LA County workers are nurses. We are public safety officers. We are sanitation workers. Some people here today may wonder: But you work at a park? Are parks and recreation really frontline services? My answer to that? One hundred percent, yes! My work and my colleagues’ work is essential. Through parks, we build community, and keep families and young people connected to healthy settings and experiences. During the pandemic, we’ve never closed. That’s why I’m so saddened that LA County has decided to insult me, my co-workers, and other county workers with low pay offerings that don’t keep up with inflation or the cost of living in the LA area. That’s why we county workers demand that our leaders respect us, protect us, and pay us!”

If the Board and CEO don’t appreciate County workers, then come June 7th all union members should vote Solis out from the District 1 seat and elect someone who actually cares for front line workers, Talk is cheap and keeping weak leaders is too expensive. District 3 seat is up for grabs, vote for someone pro-County worker. They want votes, then they should care for County folks.

How will the “stepping down” of Antonia Jimenez impact negotiations for DPSS?

They need to consider telework for all employees to save cost on gasoline. I have not been allowed to telework since the pandemic started because clerks and secretaries need to be in the office to answer our bosses phone lines. Answering your own telephone is a part of everyone’s job specs. Everyone has been able to quarantine or telework when sick except for clerks and Secs, we are not given that option.