Donald Trump attacked us when he nominated Neil Gorsuch to the Supreme Court.

In the words of SEIU International President, Mary Kay Henry, “this is a step backwards for every American who wants a good job, the opportunity for a better life for their family, and a real voice in our economy and democracy.”

If Gorsuch is confirmed, the Supreme Court will rule against the communities we serve by gutting the public sector, silencing worker voice, and doing away with collective bargaining.

Whether you’re a Democrat, a Republican, or an independent, as a member of SEIU Local 721, you’ve benefitted from our campaigns to do more for the public good and those responsible for providing it. When we add jobs, they are good, union jobs. When we win raises, and expanded benefits, they make a difference to our families, and raise the standard for all working families. Organized labor is the rising tide that lifts us all up into the middle class.

If we lose the power we’ve won at the bargaining table, in the legislature, and beyond, then we’ll have to pull teeth to settle every line of every contract. We will be asked to pay out of pocket for our retirement, for our health coverage, and so forth. Without a strong union, fighting cuts and concessions will take up so much of our time and resources that we won’t be able to fight back when unscrupulous corporations and politicians do away with our safety net programs, and privatize the public sector.

Anti-worker. Anti-union. Pro-corporation. Pro-1%. Gorsuch is wrong for the Supreme Court, and wrong for America!

President Trump campaigned as an outsider, but his Supreme Court nominee, Judge Gorsuch, is part of the swamp Trump promised to drain! Gorsuch worked in President George W. Bush’s Justice Department where, despite controversy, he put party loyalty above country, and above our Constitutionally guaranteed civil liberties and rights.

President Barack Obama nominated Merrick Garland almost one year ago but obstructionists in the GOP refused to uphold their oath to uphold and defend the Constitution.

Click here to defend the Constitution and preserve our system of checks and balances through an independent Supreme Court!

If we don’ttake action today, the highest court in the land will become unbalanced for decades to come! 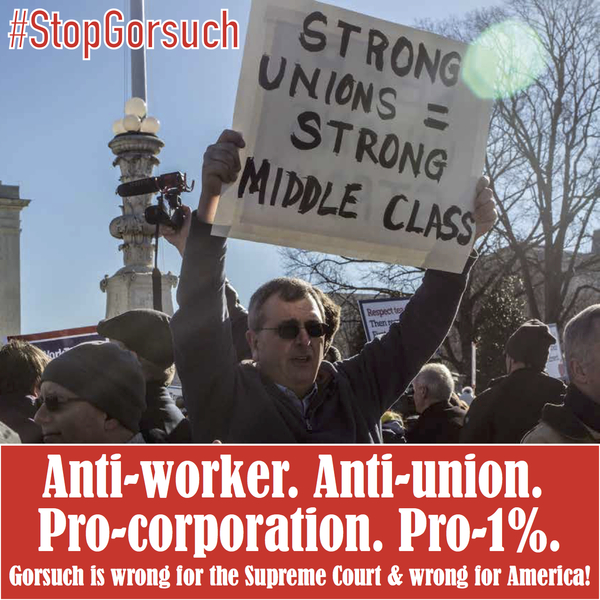