Moreno Valley, CA — Chalk up another blunder in the long list of mismanagement for the County of Riverside. In the most County of Riverside move ever, managers at the County’s Riverside University Health System (RUHS) are threatening their health workers with discipline up to criminal prosecution for carrying pepper spray, despite the Board of Supervisors authorizing in early February the right for employees to carry.

The memo sent to RUHS employees came hours after SEIU Local 721 members at the RUHS flagship hospital returned to work after participating in an historic strike that saw thousands walk off the job over the 19 unfair labor practice charges filed against the County. One of the charges includes a bad faith bargaining charge over the unexplained yanking of a safety proposal from the bargaining table, despite multiple cases of nurses being attacked at RUHS Medical Center and other facilities like the County clinic in Hemet. 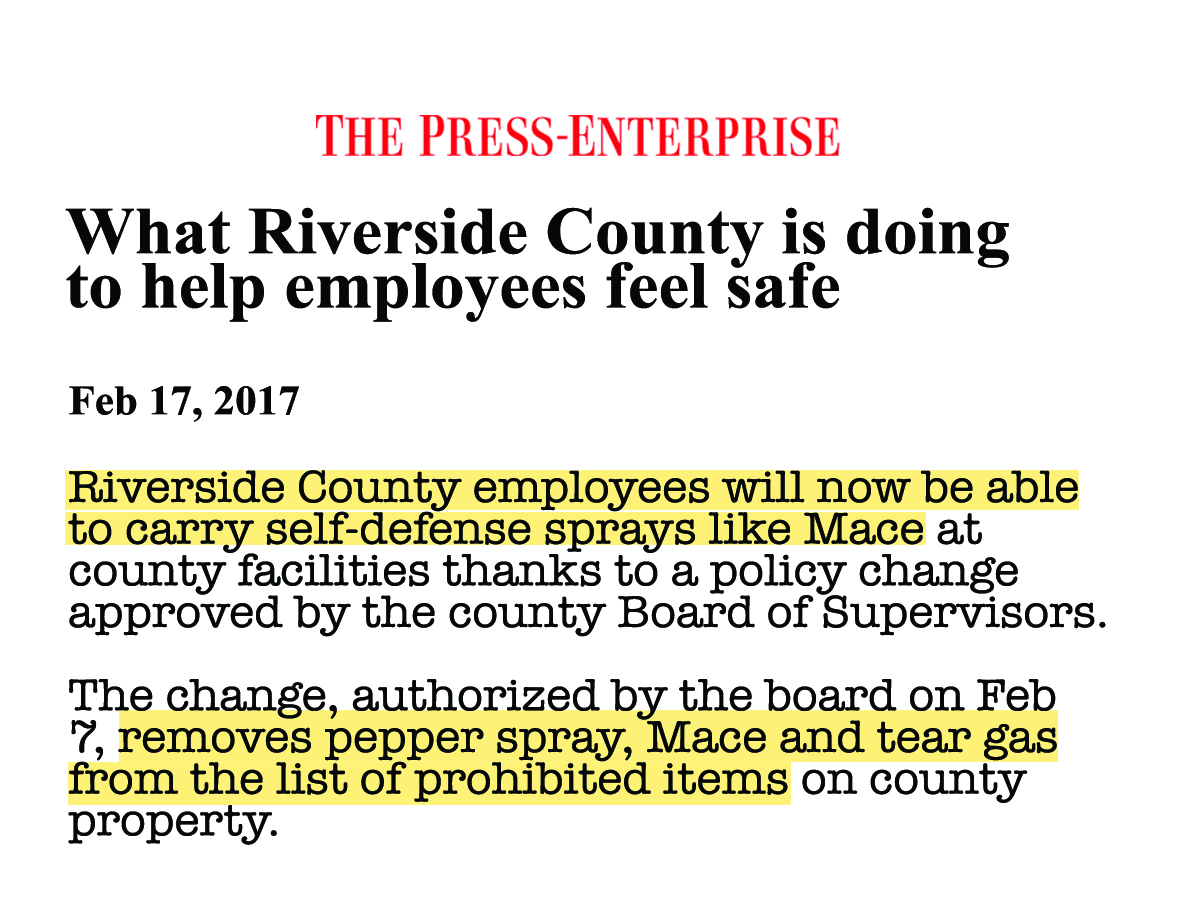 The memo comes at a time when health care workers at the RUHS hospital are becoming even more vocal over the dangerous working conditions and the County’s unlawful practices. Despite the hospital’s frontline workers continuously citing examples of guns and knives being confiscated while at work, County management refuses to install metal detectors at RUHS hospital entrances – even though a metal detector protects them and other top officials at the County Administrative Center (CAC).

“Being in the lower level, there are dead spots with no phone service and minimal personnel who would be able to hear or offer assistance if something happened to the homeless man or myself. To this day this entrance remains unsecured,” said ICU Registered Nurse Tara Stoddart at press conference condemning the RUHS threats. 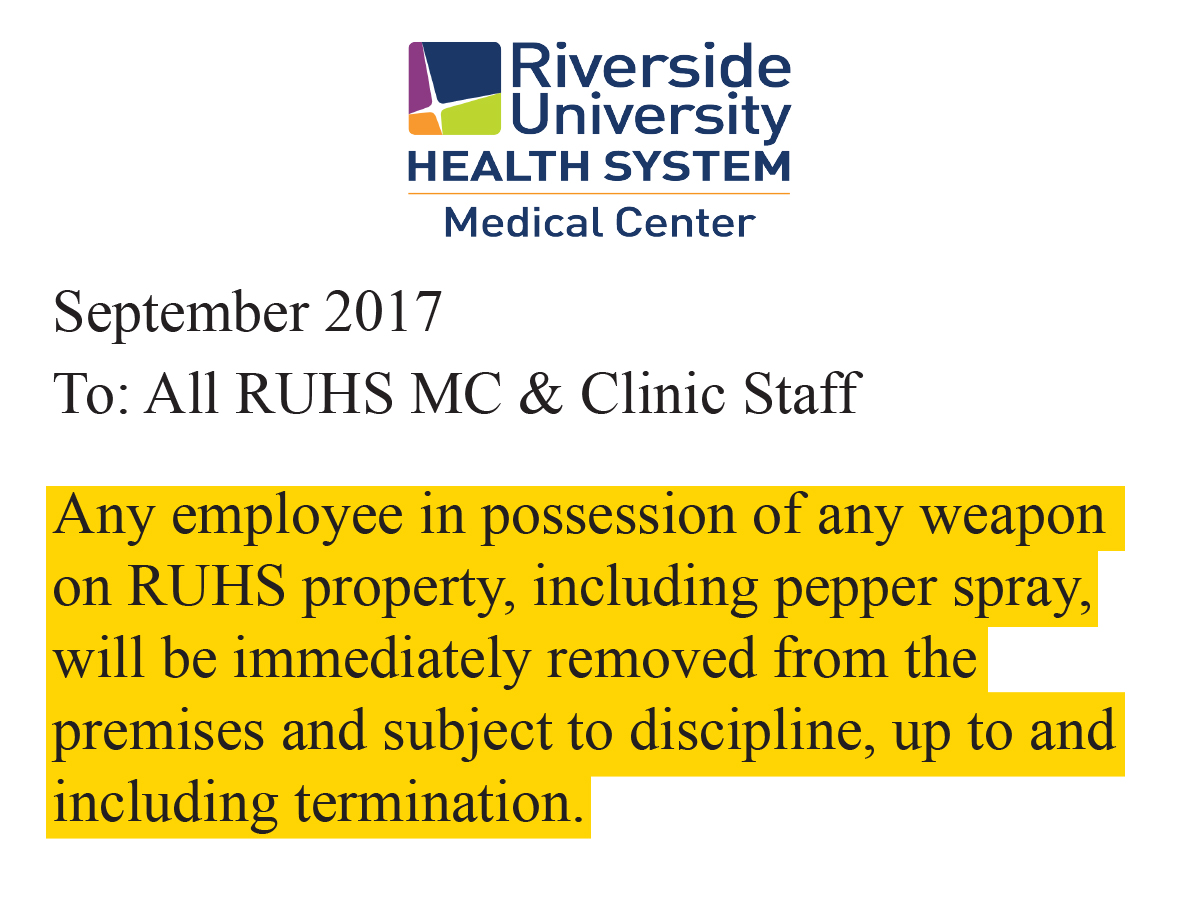 “I am fearful every time I must perform duties in the lower level at night, since our concerns are not taken seriously, and the county has not provided us with the tools necessary to keep hospital visitors and the dedicated employees safe.”

Stoddart has every reason to be fearful. Her colleague Teri Lopez, a Registered Nurse in the ER, was violently attacked by a patient, who repeatedly bit her and slammed her head into the ground (watch video). If it wasn’t for the heroic efforts of Lopez’s co-worker who came to her defense, the outcome could have been deadly. After Teri stepped forward with her story and even shared it at the County Board of Supervisors in March, countless other members began shedding light on the dangerous working conditions they endure within RUHS facilities — prompting SEIU Local 721 to organize multiple self-defense classes to give workers the skills to protect themselves.

That County lawmakers are saying one thing on the County’s pepper spray policy and RUHS managers are saying the complete opposite is just another example of County management’s incompetence. Let’s not forget that this is the same County whose lawmakers approved over $40 million in sweetheart contracts to a European consulting firm to help them save money (!!), and has also been bilked for close to $70 million in a toxic swap deal with Wells Fargo. That the lives of dedicated and highly skilled frontline workers are caught in the middle of County’s continued failure to address serious safety concerns is a sure way to lose talent at a system with already high turnover rates.

The situation at the County of Riverside is so dire that even gubernatorial candidate and former L.A. Mayor Antonio Villaraigosa, who walked the strike line at RUHS with workers, has weighed in on management’s threats over the pepper spray.

“When nurses are not safe, patients are not safe. No doubt, if nurses feel the need to carry pepper spray due to increasingly dangerous working conditions then something has gone very wrong,” he said in a written statement.

If there were ever a reason for members to continue to speak out and hold the County accountable for their mismanagement and lax safety measures, this is exactly it.  The lifting of the pepper-spray ban by the Board of Supervisors came in reaction to the tragic San Bernardino terrorist shooting on Dec. 2, 2015 that left 14 people dead and 22 people injured – of whom ten of the fatalities and 14 of the injured were SEIU Local 721 members. An official task force convened in the wake of the attack had recommended the safety measures, which the Board of Supervisors adopted – and which RUHS managers now wish to unilaterally and shamefully disregard after having failed to keep their own employees safe.

As Ipyani Lockhert from the California Partnership, a non-profit organization that advocates for patients, said at the press conference condemning the RUHS threats, “Workers and Riverside County residents deserve better.”

“We must take care of those that care of us. This cannot continue,” he added.

Indeed. Count on SEIU Local 721 to continue to defend the over 7,000 County of Riverside workers from any threats or intimidation from management. Together we will raise up the working conditions in facilities throughout the County of Riverside.

Great article! This highlights so many issues that we face daily. Thank you SEIU for working with and for us.