It didn’t take long for so-called “Right To Work” goons to set their sights on Riverside County workers. As soon as our ULP strike started making waves, the anti-worker website CapitalResearch.org published a brazen hit piece on our members. 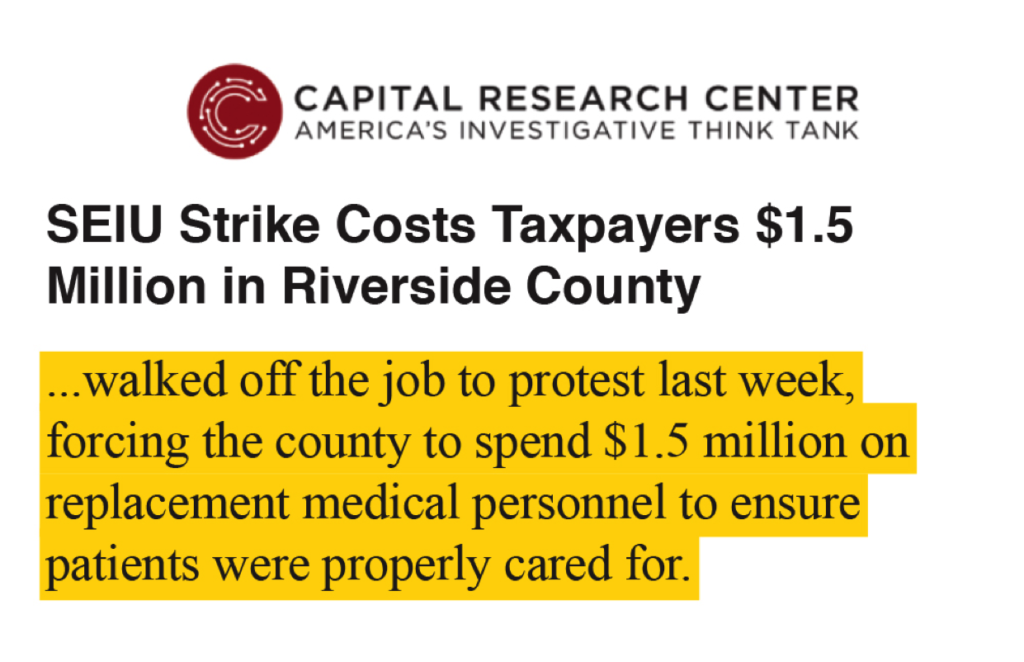 In addition to a headline blaming county workers, rather than the County’s refusal to bargain fairly, for the $1.5 million spent on scab workers, the piece goes on promote the Freedom Foundation and push the “Right To Work” lie.

Make no mistake, the people running Capital Research and other, similar publications, are professional bootlickers. They sell out working families every day in exchange for a spigot of dark money pouring from the pockets of billionaires.

Greedy billionaires have to spend millions of dollars on anti-worker propaganda because their ideas are wildly unpopular. They can’t win a fair fight, so they tip the scales with bags of cash.

So who is responsible for funding this particular attack? Let’s take a look at some of the big names.

The Scaife Family Foundations are financed by the Mellon family fortune and they’ve donated hundreds of millions of dollars to anti-worker causes over the course of decades. You’d think being one of the wealthiest and most powerful families would be enough for these people, but they’re determined to crush workers to make their pockets even fatter.

The Lynde and Harry Bradley Foundation is one of the biggest opponents of workers’ rights in the United States. This organization was instrumental in the passage of “Right To Work” laws in Wisconsin and spent millions getting anti-worker politicians elected there.

You may not have heard of the Claude R. Lambe Charitable Trust, but you’ve definitely heard of the people behind it – the Koch Brothers. Two of the ten richest people in the world, Charle and David Koch have a vast empire of shadowy front groups designed solely to hurt workers. This particular trust was shut down in 2013, but a different Koch fund continues to keep Capital Research Center afloat.

These anti-worker foundations have lots of money and no morals, which is a dangerous combination. But, all the money in the world is no match for the power of the people.

“Right To Work” attacks are going to be coming at us from all angles – emails, letters, even knocks on our front doors. Signing your online card and updating your information does two important things: it affirms your commitment to our union and allows us to give you advance warning whenever “Right To Work” lackeys are sniffing around.

Rise & Resist trainings equip you to lead your worksite in the fight against “Right To Work.” If you haven’t attended one yet, contact your worksite organizer to get one scheduled.

Educate Yourself and Spread The Word

The SEIU 721 blog has several resources to help you understand and confront “Right To Work.” Start by checking out these videos, then move on to the history of “Right To Work” and Dr. Martin Luther King, Jr.’s warning to us about these anti-worker laws more than 50 years ago. Share these articles on social media, because you can be sure that the Freedom Foundation and their ilk will be flooding your friends and neighbors’ feeds with anti-worker propaganda.