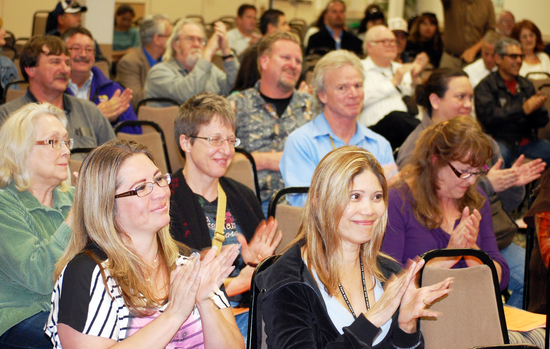 Updated: 8/6/2014, 5:15 p.m.
VICTORY!Backers of the pension-killing ballot measure in Ventura County will NOT be seeking an appeal on the judge’s ruling to take the measure off the ballot. The following statement was released today by Citizens for Retirement Security (CRS), a coalition of labor and community groups. SEIU 721 has been an active part of this coalition.

“We are pleased that our opponents are respecting the judge’s decision that their ballot measure was illegal and would be a waste of public resources to put on the ballot. The wealthy ideologues from out-of-state who were funding this measure tried to make an end-run around state law and were appropriately stopped by our legal system. This measure would have done great harm to the quality of life in our county and adversely affect our county’s ability to fight crime, protect our property from fires and other disasters, and provide quality public services. We will continue to fight for retirement security for all Californians, and ensuring that Ventura County’s retirees and taxpayers continue to be served by a healthy pension system, stated CRS Spokesman Rick Shimmel.”
==

Superior Court judge, Kent Kellegrew, issued a final ruling to take the pension-killing measure off the November ballot. The judge ruled that if the measure was against state law and if it was allowed to stay on the ballot it would result in a waste of taxpayer money because it could not be legally enacted.The ballot measure, proposed by the Ventura County Taxpayers Association and supported by Ventura County Supervisor Peter Foy, would have forced all new County of Ventura hires to go into a risky 401(k) plan instead of into a secure retirement plan in the form of Ventura County Employees’ Retirement Association (VCERA).

But, we’re not out of the woods yet as the judge issued a stay for 10 days until August 14, 2014 so that the parties have a chance for an appellate review.

“The judge agreed with us. This is a major step in the right direction.”-Craig Winter, SEIU 721 member, Ventura County Medical Center

Citizens for Retirement Security put out an official statement, see below.

Statement of Citizens for Retirement Security on Ruling of Judge Kent Kellegrew to Remove Anti-Pension Measure from Ventura County Ballot “The court has done the right thing in upholding California law and removing this illegal measure from the ballot. Judge Kellegrew said it best: putting this measure before voters would have been an enormous waste of taxpayer resources because it would only have been ruled unlawful. If the out-of-state special interests behind this measure want to rewrite the state law to eliminate retirement security for police, firefighters and other hard-working public employees, they need to follow the law. This is a victory for everyone who believes that all of us deserve a secure retirement and want to maintain the quality of life we enjoy in our county.”